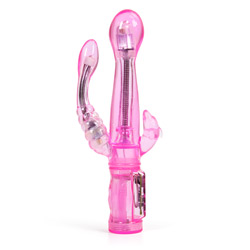 Sadly, the Double Indulgence didn't live up to my expectations.

This is a great product idea but it seems it lacked the research and development needed to make it a hit. Hopefully, they will come out with an improved model in the future. For an inexpensive toy- not too bad (although I have other inexpensive toys I would rather spend time with). I would not recommend paying full price for this product.
Pros:
Triple stimulation, great intentions
Cons:
Poor design, no clitoral stimulation
Rating by reviewer:
2
extremely useful review

I had high hopes for this one. I had looked for a while, researching a triple threat and finally chose this one. The premise is great and it looked fabulous. However, the execution is just not there. There is no vibration in the clitoral area (what is the point of putting something near your clitoris if all it is going to do is just "be" there). The other problem I had with the clitoral part of the toy is that it is really short- I can't use all three parts of the toy at one time- anatomically it doesn't work out for me.

The controls are pretty poorly placed and I could not turn it off while I tried for about 2 minutes.

I used the toy alone and tried it with my boyfriend also. We both agreed that it just doesn't do it for me. Maybe for someone with less experience, needing less stimulation this would work.

This is extremely smooth material. In fact, that was one of my issues with it- it is too smooth. Once I am excited and wet, I can't really feel it in my vagina anymore. I suppose if you are just starting out or have an issue with lubrication, this could work for you- but otherwise, it is just too smooth.

My opinion- the size is too small and not flexible enough to move all three pieces to where they needed to be for me. The vibration was very low and not having clitoral vibration was a much-missed piece of the puzzle.

Beginners could enjoy this toy I think; it's kind of a starter. This toy isn't one you can hide easily (which is pretty obvious just looking at it).

The controls on this are very hard to use. I couldn't turn it off and it took me a while to figure out how to work it to begin with. Then I would press the wrong button and everything would change- I would have to go through a whole cycle of pressing the buttons to try to get back to what I was attempting to enjoy. The toy is fairly loud but not outrageous. It could be discreet if needed I believe.

One thing I noticed right away is that the material does make it a magnet for hair (we have three dogs). So, I always have to be careful to put it away in a drawer after use - otherwise- even if it just falls over into my sheets for a second, I will find dog hair attached to it. This is a big negative for me, making it kind of a hassle to use because I don't want to do laundry every time I use it and if I don't then my sheets are sure to have a little bit of dog hair.

It was packed in a normal box, no special bells and whistles. The picture of the toy is right there on the box- so I wouldn't coin it as discreet :)