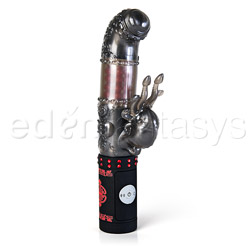 Please, let me know via email when the new review on this product is available.

Beginners beware the size of the Kraken!

If you are new to using large toys or need strong vibrations in order to climax, this is not the toy for you. If you like weak vibrations, large girth, and extreme texture, this will fulfill all of your wants. The price is steep for the risk of this not working with your anatomy. Be sure to think twice before shelling out the money on this vibe.

There are better vibes out there. This toy looks really appealing and I wanted to love it. However, it just did not deliver. The size makes it seemingly inappropriate for those new to toys, but the lack of power and sensations makes it inappropriate for toy veterans. The functionality is flawed in some way that I can't exactly pinpoint. It looks amazing, but I would suggest saving your money for something better.

This Kraken is Awesome

Walk the Plank, Matey. Be Gone!

Banged By A Pirate

If you're interested in a very low-key vibe, this is for you. Due to the girth, this is not a toy for beginners. Also, the price is too high.

Arrrrr, this could be better, matey!

Overall, Pirates Katsuni’s Revenge of the Sea is a decent rabbit vibe. It’s thick and will fill you up, but it has design flaws and may not be suitable for your anatomy. This toy got the job done for me and is very nice to look at, but there are better rabbit vibes out there and this is probably best suited for women who have very sensitive clits.

Fulfilling vibe, but has some drawbacks

Revenge is a Dish Best Served...Vibrating?

Overall, the Sea Rabbit is a nice, well made toy with tons of settings and a unique design, but I would say it is not worth the original $100 price tag . If you can get it on sale (though it's now selling for $39.99 here on EF!), do, if not, you'll survive. Be aware of the girth of this toy; it's probably not the best for first time users. But if you enjoy that girth, raised nubby bits, a strong bullet, and if the curve looks like it will tickle your fancy, this one might be right up your alley.

Not Quite The Perfect Storm