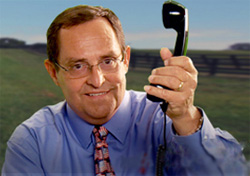 If you haven't gotten sex advice from Chip Womack, you can't really say that you've heard it all.
The human penis is nothing other than the telephone through which God speaks … and do you really want to be putting God’s telephone inside somebody’s butt?

Well of course no one would want to do that, which is why God gave us Chip Womack, our host at Republican Sex and Marriage Advice. Through his videos, Womack addresses the questions haunting of millions of Americans who are looking for politically conservative sexual advice, the kind you might get from a Bush or a Boehner. Republicans have sex and relationship problems, too, and they aren’t your run-of-the-mill Dr. Ruth kind of problems that afflict left wingers. For example, Republicans can be afraid of marriage, or afraid to go into a sex shop or even have bad breath, and mostly they have no one to talk to about stuff like this.

Directed by political consultant Elliot Greenbaum—who won a Grand Jury prize at the 2005 Slamdance awards for his nursing care documentary Assisted Living—Republican Sex and Marriage Advice not only offers intelligent, family-values-oriented answers to our most pressing sexual concerns, but also offers a glimpse into how the other side might be living right now.

Elliot Greenbaum was kind enough to put us “in contact” with Chip Womack via email for a rousing Q & A.

Mr. Womack, you seem so warm, caring, and informed on the sex issues that face modern couples. Please tell us a little about your background. Are you married? Do you go to church? Are you a businessman or a therapist?

Thank you, Lorna. I don’t usually grant interviews because I’m a very private man. My current and former wives have all asked that I keep them and my sons out of this. The triplets feel the same way.

My story was a common one: I grew up a businessman and amateur aviator. And during my time as a pilot, I discovered what women loved about men: the ability to make plans. And after helping many recreational businessmen in my area, I began to be invited to guest lecture at conferences. At the time, this was the mid 1980s, there was a rampant problem with unwanted erections around spreadsheets. I developed a method that I called “instinctive insight” that guides us through our challenges and can help us solve problems broadly.

This “Instinctive Insight” sounds like a powerful force with which to be reckoned. Can you tell us a little more about it? And, now that you’ve mastered it, can you tell us how can we encourage such insight within ourselves?

Ever since ancient times when God placed a few people on the earth, it’s been pretty much the way Darwin said: The best of us survive and procreate. But if they procreate too much, there won’t be enough food for them or they’ll die of disease. I’ve seen TV shows where the speaker talked about books on tape they’ve heard about Eastern philosophy, and from what I can tell, it’s virtually the same as that. Except I actually give answers.

What inspired you to reach out and aid your fellow Republicans who had questions about their sex lives?

Partly what I said before, but partly because I had an incident where I saw a man cry while walking on the remains of a forest that was soon to be a coal mine that was soon to be a golf course. I thought he was getting sentimental about all the lost animal life or beauty or what have you but it turned out that he was a Republican and felt overwhelmed by the potential for improvement in his golf game. He tried to hide his tears.

I understood then and there that if a Republican man wasn’t willing to weep openly about a nascent golf course, that he surely couldn’t weep openly while making love to his wife. I asked around, and I discovered that I was the only one who felt comfortable crying while making love; And other men and women were seeming to feel relieved when I confessed as much.

There are some who say that RSAMA is a satirical parody of the “seeming impotence of the Republican agenda.” How could they say such things?

That’s just a way people who are frightened try to turn the use of force against the forceful ones. For example, I met a guy who insisted that my private laser beam collection that I built for private use in my basement was a sign of fear. In other words, people will say just about anything.

RSAMA has been featured on the Guardian and the Huffington Post, but Dan Savage didn’t seem to get it. How does this make you feel?

Dan is not a friend but he is a colleague and I respect his intuitions. But what liberals don’t understand is that we live in a sacred world. Liberals think people are nothing more than molecules bouncing around giving the illusion of something bigger. They don’t have a narrative for why they are alive. Why else would they lube themselves up and pierce themselves and give each other strange haircuts and put things in their rectums? It’s the panic they feel deep down that’s making them do that. I don’t mean this to be offensive. But it’s a form of self hate and it’s a denial of our own greatness to think we’re just molecules. That is why, where I come from, brides wear white and are driven off in limousines.

I think the machine misprinted this one. Please resend.

I must offer my apologies for what is an obvious error on the behalf of automatic spell check. That was supposed to be, What’s it like being a “perfect” Republican?

I’m not perfect, Lorna. Sometimes when I look at myself in the mirror, I remember that even racehorses are eventually turned into sugar cubes. And I get sad. At that point it’s just my faith and male competitiveness that carry me though. And the sheer habit of helping people help themselves.

The throbbing ears and erupting trunk of your elephant mascot/logo are very arousing. Surely, that was intentional ... yes?

The logo for the party is arousing, yes. We merely re-deployed the Republican logo.

There are some people who think that the male genitals are something to be ashamed of and disavowed. I reject that. I think that’s false. That being said, we may need to re-edit the title sequence so that viewers aren’t frightened off by seeing something they’re not ready to understand.

What does the future hold for Republican Sex and Marriage Advice? Will there be any compilation DVDs or film festival appearances coming up soon?

I think it could be popular on any kind of digital format. I’ll have some of my employees respond to requests if any come through the site. I believe that all my messages can best be expressed in the form of light. My best love.

Finally, thank you so much for taking the time out to speak with us. It’s been wonderful. (Was it good for you?)

I’d like to thank the girl who typed this for me. What is your name, sweetheart? You don’t have to type that. Let’s just thank them and send it on.
Tags:
Views: 1049