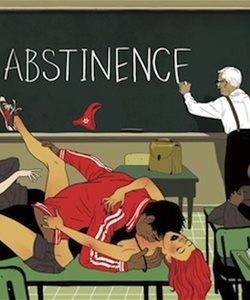 http://politicalirony.com
No matter what individual beliefs may be regarding sexual education, it is a public matter. Access should be easily available and the literature should be accurate.

"It's kind of hard to teach Sex Ed when half of the class is already pregnant."

Before I get flamed into oblivion, I shall put my disclaimer. If you are religious or spiritual, rock on. I have no problem with people’s individual beliefs. A person can believe in one god, a million gods, spirits, aliens, ghosts or rocks. Diversity livens things up. However, it becomes a problem to me when these beliefs are used as a weapon to diminish the rights of others, deny science, or push an agenda.

Holy lack of political correctness, Batman! Did I really just say that? Yes, I did. Individual beliefs should not translate to imposing it upon an entire group of people, especially when that group is a captive and impressionable audience of children. Every year, the federal government allocates millions upon millions of dollars to abstinence until marriage sexual education. Some states have different attitudes (overall) regarding sexual education. You may have had a very comprehensive sex education. You could have also been separated by gender and been told how to keep yourself pure. Personally, I had a guy from Planned Parenthood who visited our school with a table full of condoms, diaphragms, speculums and more. However, friends in the school nearby had abstinence only education.

One thing that I will always remember is when my friend commented about his Sex-Ed class back in high school, “It’s kind of hard to teach abstinence only Sex Ed when half the class is already pregnant.” While it was meant to cause a chuckle, he did have a point. In fact, the more abstinence only education a state has, the higher the teen pregnancy rates tend to be.

Let’s look at some of the states with the highest teen pregnancy rankings. New Mexico, Mississippi, Texas, Nevada, and Arkansas are currently the top five and have been towards the top for years. These states have more conservative politics and a stronger religious presence, that, overall, tends to permeate through many social and government institutions there. These states also tend to have more restrictions when it comes to giving teenagers access to birth control and accurate information on condoms.

Perhaps parents can’t face the fact that their little darlings are going to have sex, and it’s going to most likely be before marriage. Perhaps it worked in the older days when you got hitched barely out of high school, but that’s not how it is anymore. This antiquated system leaves teens in an environment that is not welcome to their questions and does its best to bar them from actual science and protection. Just recently, a student named Katelyn Campbell protested the inaccurate, abstinence only Sex Ed that was coming to her school. The speaker was Pam Stenzel, a woman who spreads scientific inaccuracies and preaches that the only way you’ll come out of sex unscathed is if you are married beforehand.

The principal of the school in West Virginia (a state that also has very high teen pregnancy rates compared to other states) threatened Ms. Campbell to prevent her from speaking against the misinformation. The principal even threatened to call her soon-to-be college and tell them that Ms. Campbell had “bad character.” This was because a high school senior did not want Ms. Stenzel to tell her peers that condoms never work, having sex in high school will make you unfertile, and using birth control makes your mother probably hate you.

There are a host more of examples, but it all evens out to this: Don’t lie. I’m not saying science is right about everything, but you should at least research yourself. Find good sources and studies showing the effectiveness of birth control. See for yourself. Those who lie to push an agenda have no business being around children and young adults. Advocating for safe practices does not make children more promiscuous. Just look at the data. Information on such health matters are a public concern and should be publicly available to anyone. If some parents want to cling to older ideals, that is their business, but their children should not suffer potentially life-altering situations because of ignorance.
Tags:
Views: 5480