Watson and Crick? Bah! It’s all about Franklin, Rosalind Franklin. 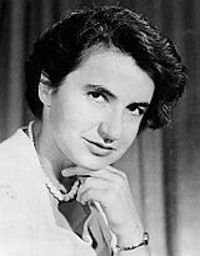 http://en.wikipedia.org/wiki/Rosalind_Franklin
You may or my not have heard of Rosalind Franklin. As we celebrate Women’s History, here’s a chance to look at a marvelous, intelligent woman of science.
Picture it: the 1940’s. There was a breath between one World War and the next. It was before the time of the electronic/technological boom. And it was a time where gender roles ran very, very strong. In the United States and many parts of Europe, women were… encouraged… to adhere to the gender roles society had in mine for them.

What about a job? Well, if you really wanted a job as a woman, you could get one. However, your options were limited. Some of the jobs you may have been encouraged to take were: receptionist, phone operator, nurse, or teacher. If your ambitions were higher, say, to be a doctor or engineer, the chances were you were strongly dissuaded by your school counselor, pastor, or parents. While this was common for that time, I implore you to talk to some of the women who grew up then (it can be a very sobering, yet enlightening experience).

Women who did not listen to authority would still have a battle. Higher education was a man’s world, and many a time it was known when women were not welcome. Women may have been heckled, demeaned, and devalued as an equal peer in universities. They may have faced discriminatory practices and biased professors. Still, these women were strong and determined, and carved their niche into the world. The niche they wanted.

One of these women was Rosalind Franklin. Franklin did receive encouragement from her parents to pursue academia and her father personally gave her lessons in physics and other sciences. From there she took time in a variety of colleges and universities. She received a Second Class Honors at Cambridge College. Because she was a woman, she could not receive a Bachelor’s Degree, and this Honors was treated as an equivalent (Cambridge would not grant women Bachelor’s Degrees until six years later, and Franklin received one retroactively).

From there, Franklin moved between universities and labs. During war time, she studied coal and fuel efficiency. When she was free of her war effort requirements, she was accepted into a position at King’s College. There, she would learn the tools and knowledge to become a major player in the discovery of the structure of DNA.

At the time, scientists did not know very much about the behaviors of our DNA. It makes sense, too. How can you understand how something works, or better yet explain it, when you don’t even have an idea of what it looks like? While some who quested for this knowledge did purely for the good of humankind, many others were far more egocentric. Scientists, then and now, can be a very ego-oriented group. Sure the knowledge mattered, but it was about being the first to find the answer (and get the credit) that truly motivated many.

It lead James Watson and Francis Crick to King’s College and the lab Franklin worked at. At the time, she was working on a technique called X-ray Crystallography. In short, it is a technique using X-rays that helps analyze the shapes and structures of crystals. Franklin was using is to take images of DNA. These pictures contained the crucial data for Watson and Crick to pose their theories on the shape of DNA.

However, it appears that history can glaze over some of the finer details, and this usually happens when it’s not as pretty a picture. Franklin’s work and papers were given without her permission to Watson and Crick by her advisor, Mark Perutz. These papers showed that Franklin independently and correctly theorized the structure of DNA along with many other properties the molecule has. While Watson and Crick are scientists in their own right, they “relied” heavily on the data in Franklin’s works. Interestingly enough, Franklin only receives a small footnote in Watson and Crick’s papers even though it wouldn’t have existed (at least at that time, or perhaps ever) without her knowledge.

Within the scientific community, some did call Watson and Crick rogues for their behavior. Even using Franklin’s work, they did not offer her co-authorship and they minimized the contribution she and her college had on the discovery. Instead, they offered it to another man, Maurice Wilkins, who did not contribute much to the model Watson and Crick created or to the data beforehand.

Yet, a true scientist, Franklin would continue to work and contribute to the world of microbiology, such as studying Tobacco Mosaic Virus, which affected damaged tobacco crops. She would continue to move up in the scientific community, but it is speculated she would have been given a higher station if she were male. Still, Franklin helped pave the way for future women of science. Despite hardships and difficulties, Franklin pursued her interests and made many important contributions in her field. She did not let people discourage her due to her gender and she still contributes to the future generations by showing women around the world that, yes, they can do it.
Tags:
Views: 1222