The Shaky Bridge Experiment and How It Relates to Your Life 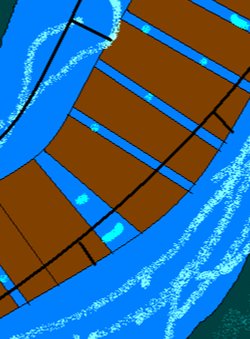 Image Courtesy of Badass
If you've ever wondered "What did I ever see in him/her?" this might be the answer.

"Beneath the layers of linens that cover our beds, there lies a shaky bridge, ready and waiting for high-stakes action."

The Shaky Bridge Experiment took place in 1974 over two days and was run by Donald G. Dutton and Arthur P. Aron, two well know psychologists. On day one, an attractive female stood on one side of a rickety old suspension bridge. This bridge was made of boards and cables and hung above a ravine. It was one of those bridges that, no matter how brave you were, you literally think about your death as you cross it. When males crossed the bridge, the attractive female experimenter would introduce herself as a college student and ask them to take a survey for her psychology class. At the end of the survey, she gave the males her card and told them they could call her in the evening to get the results.

On day two, the attractive "college student" would again stand by a bridge and wait for males to cross, but this time she stood at the end of a sturdy concrete bridge much closer to the ground. She introduced herself the same way and again gave the males her card to call her and get the results if they wanted.

Little did the men know that it was who would call that they were interested in. It turned out that more men from the shaky bridge called her than the men from the concrete bridge. What the experimenters were trying to find out was how many of the men from each scenario would call her and ask her for a date. They wanted to know if the arousal from crossing the scary bridge would make the woman more attractive. They were right. Way more men called and asked her out from the scary bridge than the normal bridge. But why? It's called attribution of attractiveness.

When the men called and asked for dates, she asked them why they wanted to take her out. All of the men gave reasons attributed to her physical beauty, but none of them attributed their attraction to her to their just having crossed a very scary bridge and their arousal level being up from being anxious.

But how does this relate to you?

I found this study to be very interesting, but also very entertaining. When I first read of this study, I related with the men in the experiment and the traumatic experiences in my life. Shortly after my father passed, I dated this guy and I thought he was the bees knees, the answer to my sadness, so to speak. Six years after the break up, I'm embarrassed I dated him and can't for the life of me figure out why I thought he was attractive at all. Now, I can blame it on my personal shaky bridge, the loss of my father. I bet you can sit back and think of a few instances where you dated questionable characters during high times of emotional distress in your life. Hell, let it be your new excuse. It's scientifically proven and junk.

Then, I turned it around. If I'm having a hard time finding a date right now...perhaps I should find a shaky bridge in Michigan and pull the same game. We women need to quit moping about not having a date, get fake college IDs, and go stand by shaky bridges with notebooks. When you try this, you can be as selective as you want. Only ask the handsomest fellows to answer your questions, and since he is anxious, you'll be miles more attractive than you actually are. So ladies, get out there to those shaky bridges, or find a man in emotional distress, and pass out your digits.
Tags:
Views: 2942

Badass
It is what it is, I do what I do. I am a nice lady who likes to surround herself with nice people. I would love to get to know you, if you would love to know someone nice. Love it, or learn to like it.

I don't believe humans should have sexual orientations and do not have one myself. I have always believed that love is love and love is blind..

I have been involved with the Edenfantasys community for quite sometime now and if you happen to be a new comer feel free to ask me the "how to's" of nearly anything on Eden.