Are We Being Overexposed to Sex? 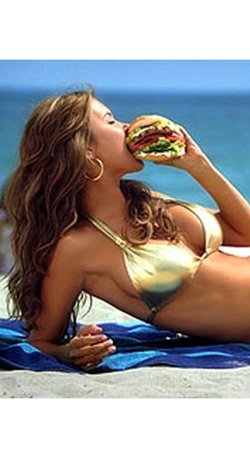 Screenshot from Carl's Jr TV Ad
Are we all becoming sex addicts or are we just really hung up on getting, having, and experiencing sex?
EdenFantasys recently tweeted a question and it got me to thinking about sex in the media. So first, I’m going to par it down to the core of what was being asked, which was basically: is there a difference between being obsessed with sex and being addicted and if so, has our modern society created an over exposure to sex that is depicted in current media or is the way we view sex just representative of our sex drive?

I would generally answer that there is a difference between sex addiction and just being obsessed with sex. Addiction is defined as the continued use of a mood altering substance or behavior despite adverse consequences. You can be obsessed with something and not have it affect your overall behavior. However when someone is addicted to something they tend to change behavior to get what it is they are addicted to, and to the more extreme example will put themselves into dangerous situations to get what it is they want.

Sex addiction is real. I’m not going to say otherwise. However as with any addiction, it’s something that requires that the individual that has the addiction to be able to manage it, and be able to see when that behavior is becoming an issue with daily life. Is that person starting to miss work and family obligations? Is that person starting to change their daily routine to accommodate their addiction? If so, then yes, it’s an issue and that person needs to get help.

However if you’re thinking about sex a bit more than normal because you just started a new relationship, or it’s just been awhile since you've had sex of any kind, then no, it isn't an issue and it’s perfectly normal. You also have to take into account that some people just have a bigger libido then other people tend to have. It’s up to the individual to decide if that’s the case. I will use myself as an example. Although I am exploring my sexuality as someone who is Pansexual, I've never been all that interested in pursuing sex for the sake of sex. I would much rather have a more connected experience when I have a partner. I do consume a fair amount of sexually explicit content. I'm able to focus on other things when I'm not looking for content to feed my libido.

The media does use sex a lot to sell everything from cars to hamburgers. So to an extent I do think that depictions of sex or sexuality have gotten to a tipping point. However mainstream media in and of itself has relied on creating a sense of want for the product they are trying to sell. So they tend to go for the most basic human emotions to create that connection to their product. Obviously with EdenFantasys, sex is the product so in that environment this is rather moot. However does Carl’s Jr. need to use sex to sell their latest version of a hamburger? I don't think so. Hamburgers tend to sell themselves, so what Carl’s Jr. is really selling is the emotion of eating the hamburger and when people make that connection they want to repeat that experience. I personally think they are just going to for the sensationalistic nature of what such images create when people see the ads on TV.

I think that we aren't overindulged or even over exposed to images of sex, at least in America. Mainstream media has a love/hate relationship with sex. If there is money to be made, they are all over it. However if it challenges the mainstream perception of sex, or even sexuality, mainstream media wants nothing to do with it. You don't have to look any further than the differences with cable and network TV. On HBO you have generally graphic sex happening, however on NBC you get heavy kissing and maybe view some sexy underwear. The broadcast network show will fade to a new scene or go to a commercial just when things start to get interesting. I've been rather vocal that there needs to be more equality with the way nudity is handled in mainstream entertainment. I think the amount of effort that is expended to hide male nudity is rather remarkable. However there is just as much effort to show female nudity whenever possible. I think that is slowly starting to change. The HBO Series Game of Thrones has shown quite a bit of male nudity in the past. However there is still a long way to go before there is any real equality to how male and female nudity is shown on screen.

The human sex drive is very powerful, and the more you feed it the more you’re going to want to engage in sexual activity. However the line between generally healthy obsession and addiction is very thin. It is something that a lot of people struggle with on a daily basis. Sex is a primal need that everyone has, and it’s a need that has to be taken care of in one way or another. I think that as we continue to advance the conversation about sex and sexuality. We will be able to have a better grasp on what is healthy and what is destructive to an individual.

So to consider the question we now have to ask ourselves is: how do we define what is too much and what is just right? This is then compounded by the fact that it’s different for each person. While one person might be ok with watching a full 90 minute adult film, another person might think even one scene of semi-graphical depictions of sex is too much for them to handle. So what this really comes down to is personal preference and how much each individual is able to tolerate at a given time. The main deciding factor is the individual, which really is what this is all about.
Tags:
Views: 1858