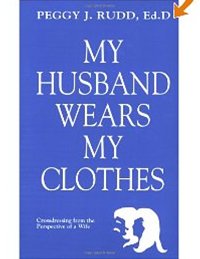 www.books.google.com
I will discuss how cross dressing came into my life, why it grew on me and my advice for coming out to the important ones in your life!

"If you judge a book by its cover, you'll never know its true story."

So, you may be wondering to yourself why cross dressing happens, how it happens to you or the one you love, and how you can deal with it and bring it up to your partner without embarrassment or worse, a rift in your relationship. In the length of my article, I will tell you all about these questions and my takes on them, and how they led to my present day experiences.

Why does it happen? More often than not, I read about young children, most often boys trying on their mother's clothes or making improvised clothing like dresses and other outfits. I for one started off being a silly, five year old boy who tried on his mother's pantyhose when she wasn't looking. But being five years old, why would I know any better as to what they were other than mommy's clothes? So I tried them on and just embraced the rush of an unknown feeling I was experiencing. I loved how cute I felt and how pretty I thought my legs looked. Yes, it sounds crazy, but this is what happened on a long road to where I am today.

A few years later, my curiosity struck me again. I was about ten or eleven at the time. I knew my mom always had a bathing suit she never wore, so I was curious yet again after a few years of dormancy. Once again, to hide my secret obsession, I had to hide it when she was away. I loved every minute I could get wearing it, and wished I had one of my own.

Most recently, as a joke to surprise my girlfriend, I tried on her boy short panties to surprise her after work and make her laugh after a long day. However, I had a secret obsession with these now as well, and hid in her bathroom to steal the seconds and minutes away that I could wear them and just admire myself in the mirror.

Now onto how it happens. As I explained, it often starts at a young age out of curiosity, and for me it kind of stuck through the years. At a young age, you're very impressionable and prone to wanting to be like your parents, and that was how I wanted to be like my mom, just secretly.

Here comes the hard part: opening up. It is easier said than done, let me tell you. I hid it from my girlfriend for a few months that I admired the wonderful feeling of her underwear on my body, and that I wanted to feel the same way she did more often. Then, I opened up to her and told her that I simply loved her underwear, as well as her sister's yoga pants that I tried on as well with the help of her sister. Then, I came out to one of my best childhood friends, and he was wildly surprised that "masculine, football playing Cory" was that open to being feminine and exploring the other side of the gender world. This led me to my quote: "If you judge a book by its cover, you'll never know its true story."

She then assured me everything was ok, and she even assisted me in acquiring her style of underwear as well as some yoga pants. My interests escalated even quicker knowing I gained acceptance, and began trying on makeup and other things of that nature. But the thing about it is, there is nothing wrong with it. This is something that grows on us from a young age. Not everyone experiences this, but for those who do it can be a rewarding experience. I can say this truthfully as being a Divison 2 college football player who uses his cross dressing as a release from the stresses of everyday masculine life to lay back and feel pretty and know it is ok to be yourself and express your inner being. How you do this is entirely up to you, but if you're hiding your desires, open them up! Whether it is to me or your S/O, I assure you either would be just as understanding. This has been my story of how I first started cross dressing, how it has grown on me today, and how rewarding it feels to open up and be myself.
Tags:
Views: 1936