I Am a Woman Who Has No "Window" 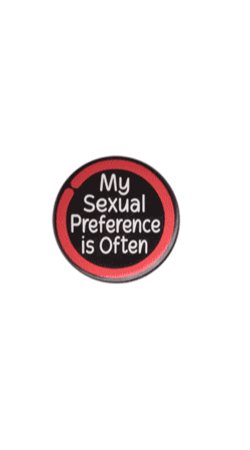 http://i1165.photobucket.com/albums/q582/nicejne/BM-SexualPreference.gif
As I get older, I find that more and more women are disinterested in sex. I however, have the opposite issue.

"Stop fooling yourselves and start pleasuring yourselves! JOIN ME in the NO WINDOW WOMEN group- it's quite awesome and we have cookies!"

I'd heard rumors when I was younger that being multi-orgasmic wasn't "the norm" and to enjoy it while I had it, rumors that sex dwindled once married and especially after kids, that as you grow older, the desire for sex just kind of went away. None of this sounds appealing and frankly, none of it has proven to be true, either.

More recently, when speaking to other wives, I find myself to be in the minority in terms of sex and sex issues. I heard a comment about someone's "window closing" and was very confused. When I asked what they were talking about, I was informed about this "window." Needless to say, I was even more confused!

Window? Never in my life have I had a "sex window," nor do I view sex as a chore. I am finding that the older I get (which, I am NOT old at all!) the harder it is to find people who are just as excited about sex now, as they were as teens! WHAT is happening?

Before I had sex with my now husband, yes, I had other partners, as did he. To say I faked sometimes would be an understatement. I had that sh*t down PAT! Look, I didn't have many partners- a couple- but still, no girl should be without climax! However, what that taught me was a lot about what didn't do it for me and a lot about what did!

The first time I had sex with my husband, I climaxed and was SHOCKED- not only because it was damn good, but because it was our first time. It was great AND I got off! I get that as a woman, it's generally a bit more work...but geez, it's not as if I'm as complex as a 500 piece erector set!

Needless to say, that opened the gateway to so much more. I think over time and several learning curves, struggles and communication issues- we've learned to communicate very effectively, sexually. We've tried new things and continue to, gotten new toys and continue to get more. Neither of us refuses to try something different. Rarely does either of us refuse anything, period!

Anyway, back to the chatter. When I ask why other women have this window, why sex is a chore, their answers are baffling. They're tired. It's too much work. They're just not interested. OK, tired, I get- but I've had sex plenty of times while tired. Sometimes it's simply about pleasing your partner. It doesn't always have to be about getting off- just get them off and watch them enjoy the treat. Too much work? This one is beyond me. Unless your man is extremely difficult to get off- or you simply have no clue what pleases him- sex should never be too much work! Not interested? Well now, this one is a bit more interesting to me. How on earth is any human NOT interested in sex? Our natural instincts say to procreate and reproduce, but generally speaking, humans have a sex drive for most of their lives- if not their entire lives. In addition, the desire to procreate is there even without the desire or need to reproduce. People in general love pleasure, love feeling great- honestly I feel quite bad for those who don't get that from sex.

After a medical procedure I found it difficult to climax, but once that was dealt with- all was awesome again! I would (and sometimes do!) have sex multiple times a day! I wish it was every single day! If it gets past two days I feel like I'll explode at the touch of skin! My husband can walk by and I feel my parts tingling, wakening and preparing for him! When he travels for work, I debate between taking advantage of toys or saving it all for him- either way, as long as I'm ready when he gets home, he's perfectly happy.

Did I get extremely lucky in finding a sexual partner who can satisfy me without issue? One whom my body craves day and night? Have we worked hard to create this insatiable sexual appetite or have we simply been able to tune into one another and are therefore appreciating nature's gift of pleasure?

I believe we did a lot of work to create a well balanced sexual relationship. We love to please each other, as much as we love to be pleased ourselves. We don't fear change or new things, but take from each the good parts and leave the rest. We're connecting on a level so different from when we were teens- it just flows. When he moves a certain way, I know what he wants. That look on his face and I know he's coming. By the same token, he knows when I'm there, what signs I have and what to do to bring me right to that point.

If you allow your relationships to dwindle down to nothing or get to the point of simply "Eh, we have sex sometimes," you're missing out. Change it up, mix it up, try something new. People can say all they want that sex doesn't matter and I'll openly say I think that's a lie! If we, as people, are unhappy sexually, how can we be happy in general? How are you happy lying next to a partner who doesn't please you? Stop fooling yourselves and start pleasuring yourselves! JOIN ME in the NO WINDOW WOMEN group- it's quite awesome and we have cookies!
Tags:
Views: 1307

Nice
Married mom, but certainly far from the days of no sex! Refusing to lose the desire and craving for more sex (not less, as many assume) isn't proving to be a difficult challenge ;) Keeping the husband coming back for more (pun intended) is just as much fun as chasing it out of him!

I find women who don't want sex to be confusing and I often find myself to be the minority. O, well...not my loss ;)

Other articles by Nice