Two Gays and A Girl 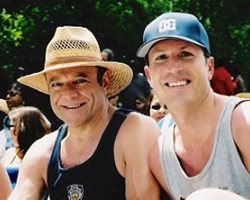 My childhood was that of a straight family with a foot in religion. It was tumultuous and two-faced. It wasn't until after the divorce and my father coming out, that I realized what a real loving family was.
When my parents divorced, the reasons were skewed. We were Jehovah’s witnesses and kids were low on the totem, when it came to divulging certain truths. It wasn’t til later, after my dad had met and moved in with Steve, that I figured things out. I mustered up the courage and said, “Dad, are you gay?” The only thing I had a “problem” with was that I had always wanted a step-mom, and I got over that in about two seconds. I consider myself lucky. My dad introduced my sister and me to Steve in 1996, within the first month of meeting him. Theirs was a whirlwind romance and we were included in almost everything. If it hadn’t been for Steve, I truly doubt our first Christmas wouldn’t have been as magical as it was.

After my dad and step-dad moved to the San Francisco Bay Area, I decided I wanted to go live with them. Things were out of control between my mom, my sister and I. I hated where I lived, who I lived with, and myself. I’m a daddy’s girl, through and through. Fortunately, I had two waiting for me.

I moved in with them in the winter of 1999, and started the eighth grade in the second quarter. It was difficult and I didn’t have an abundance of friends. My bio dad was very strict and didn’t like the idea of people being in our house when he wasn’t around. So, there went my social life. I was alright with it though. We were a happy household. Yes, there were occasionally fights. The fights always involved me and were quickly resolved. It was mainly because I was “disrespectful” in some way or not doing my chores to the level of my fathers’ expectations. Normal teenager stuff.

School was a bit of a snake pit at times. I would sometimes get teased for having two dads. Rumors would start flying about my sexuality or I would be called things directly to my face. It’s amazing how remarkably dim A+ students can be. I never came home crying from things kids said. I would tell my dads about some things kids would yell or say. Either we would laugh at their ignorance or they would say something memorable. Usually it was something to think about if what someone says to me is hurtful or upsetting. Things like, “That is their opinion and unfortunately there are people out there that think that way. Pity them, and don’t take what they say to heart.”

One thing that was hard, was being a girl going through puberty. My dad tried to give the religious version, before he came out, and it was a horrible failure. I couldn’t stop laughing. I knew about sex. We did AIDS walks, my step-dad help found the AIDS Support Network in the area where we used to live. I was educated in safe sex, STD’s, STV’S, pregnancy, all of that. What was difficult were the little questions. Is this normal? Am I normal? Are my nipples supposed to look like this? Not really things I could ask them. So I would wait to ask my mom, when it was time for my monthly trek back down the coast or call one of my aunts.

High school had the same kids from middle school, and for the first two years not much changed. I avoided certain kids and cliques (the top tier kids), and had some good friends. Nothing life changing, but then I preferred the staff to the students. I didn’t have sleepovers or many friends over. If I did, it was when my parents were home.

I went to more concerts than most of the kids in my class, went to amazing musicals, and many great events. One, in particular, was an outdoor R&B festival in Oakland. Here’s how awesome life can be; there was a raffle for a cruise to Hawaii and I put in multiple entries for my dads and myself. Sure enough, they call Steve’s name. Turns out it was the first time he’d won anything! Wait, it gets even better. When my dad and step-dad are in Hawaii, they get married! They got matching tattoos, the whole bit.

My step-dad was a great man. He changed my life. He was from Wisconsin and grew up in a Lutheran family. He was spiritual, but not religious. He was a disciplinarian, but not mean. He was a great cook and loved to garden. A handy man of sorts. He was the one I told when I had my first hit of weed and offered to give me advice about blow jobs. I never took him up on it though. A little too much information, for me. He was the yin to my dad’s yang. I know it sounds like I’m romanticizing him, but if you were to ever to talk to someone who knew him, they would all say the same thing. Steve was a beautiful person. Don’t get me wrong, he had his faults, but they paled in comparison to his loving, kind nature.

Junior year of high school, my dads sat me down for a talk. They had been hiding something from me. Steve was HIV positive. Not only that, he had cancer and was going to start chemo therapy. I was hurt, scared, and fearful. All I could do was hold on to Steve, and ask “Why? Why didn’t you tell me?” After the initial “hurt” went away, I could feel the clock ticking.

My step-dad powered through it, and for a while things were pretty much like normal. School was the same, my dad and I still kept with our routines. I played sports and was a part of multiple extra-curricular activities. I got a part-time job. The facade of normality, soon started to crumble.

Steve was starting to show his sickness. He developed Bell’s Palsy, and was losing his hair. He was tired and in pain. My dad was very doting and helpful. I helped where I could, but they wanted me to get out of the house and live life. I talked to my step-dad about death, and he told me how he believed in spirits, in souls, but not in heaven or hell.

The last weekend was as perfect as it could get. It was Gay Pride 2003 weekend in San Francisco and we were going as a family. The first day, my dads renewed their vows in front of San Francisco’s City Hall. The second day, we watched the parade and I never left Steve’s side. He was extremely weak, but refused to miss out on the fun. That night was bad. The chemo had killed the cancer, but it brought Steve to his knees. He was tired of the pain killers and weaned himself off of them too fast. He spent the whole night sweating and in pain.

The next day I went to my friend’s house to hang out. I got a text to come home, and walked home to find two of my dad’s closest girlfriends arriving. When I walked in the door, my dad’s face said it all. I collapsed on the floor crying. Steve had died. It hurt more than I ever thought. I’d lost people semi-close to me, but never someone that was this close. When I went upstairs, I cried by his side and childishly begged him to wake up. My mourning moved quickly from pain to acceptance pretty quickly. I think it’s because Steve prepared me for the loss, but talking to me about death and his own acceptance. I am truly grateful for having had that man in my life. My family was torn and he brought love back into it. He meant a great deal to a lot of people in the older gay community in San Luis Obispo County, and the AIDS Support Network. After Steve died, they named a small walking park “The Steven Weiss Living AIDS Memorial Grove”.

After Steve died, my dad and I were broken. We didn’t know how to function. I was starting my Senior year and, to make matters worse, my little sister moved in with us. I love my sister, but we were two teenagers that did not get along. We were all emotional, but for the most part it was misdirected. My sister soon moved back in with my mom and it was just me and my dad. We were both lost. He was trying and failing at dating. It seemed to be his way of blocking out the pain. I smoked weed and slacked off at school. My dad was still strict though. If I were a minute after midnight, I would wake up to a club on my steering wheel. That was how he “parented”. We survived. We still had a pretty close and open relationship. When I lost my virginity, I told my dad within the week. He, honestly, didn’t know what to do or say. I reassured him with the truth; I had been safe and used a condom.

My grades dropped significantly and I was struggling to care. It wasn’t until the last two months before graduation, when reality hit that I might not graduate. That’s when I pulled failing grades up to passing ones and graduated with my class.

I spent the next few years bouncing around and living life. During that time, I accepted myself for being bisexual, had good relationships, bad relationships and multiple one night stands. Now, I’m married to a wonderful man and we have a son together. My dad doesn’t live in California anymore. He and my little sister moved to Chicago seven years ago. We see each other multiple times a year and talk on the phone several times during the month.

I feel like after the divorce of my parents and when my dad met Steve, I was given a “second chance” at a family. I love my mom and see her every other day, but I mean a normally functioning family. My childhood was filled with fights, alcohol, lies and hate. After the divorce, seeing my dad happy with another man, was where we saw real love and happiness. I would give anything to go back to when I was in high school, groaning about the rules that were in place in our home and tell that girl to shut up and enjoy it.

Whenever I hear someone talking about gay rights or gay marriage, and not in a pleasant tone, I think of my family. I know what the truth is. I’ve seen it work. Sometimes I tell my story and it lets them know where I stand, and that I know differently than they do. Other times, I let them go. I’m not going to share my story where it is not heard, or where stones can be thrown at it. My story is of love and that’s how it shall remain.
Tags:
Views: 1405

TJtheMadHatter
Bisexual mother of one, happily married in a hetero relationship.

Use the code Y2B at checkout and save 15%