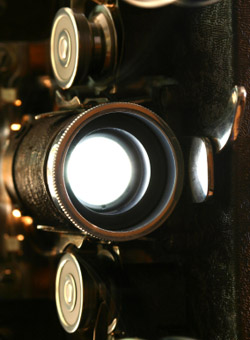 Today on Sexis, we’re pleased to launch a new running column, SexVoxing. SexVoxing will feature Sexis contributors and staff sounding off on a varia of issues, from the pointed to mundane. To kick it off, we thought we’d start with something everyone has their own list for: What is your favorite sex scene in mainstream cinema?

Does Jason Statham’s shirtless oil wrestling scene with a bunch of burly men in The Transporter count? No? Okay, then I’d have to go with any scene from the 2005 movie Lie With Me, starring perfectly chiseled Eric Balfour (Who stole a corpse’s foot and stuck it in Claire’s locker in the first season of Six Feet Under). The characters played by he and actress Lauren Lee Smith in Lie With Me spend pretty much an hour and a half on celluloid completely naked in the heat of a sexual affair. The movie is incredibly erotic, and nothing is left to the imagination, with neither the director nor Balfour having any qualms about showing full frontal nudity constantly.
—Daniel W. Kelly

Technically it isn’t even a sex scene, but the smokin’-hot makeout session between Elias Koteas and James Spader in David Cronenberg’s Crash wins this hands-down for me. I love the mixture of clinical exploration and passionate face-sucking, and the eye-fucking doesn’t hurt either. There’s oral worship of a fresh tattoo—painful and fucked-up and perfect for these two characters—and no dialogue whatsoever. In fact, there is no background music, and no noise at all aside from heavy breathing, zippers, the slick sound of one mouth against another...um. Where was I? I also appreciate the way this scene intentionally fucks with cultural tropes; it happens in a classic convertible, recalling the whole fifties prom-date scenario, though the scene itself is highly transgressive in its depiction of a different and somewhat distant kind of loving far removed from romance. Though this scene ends with Koteas rolling over onto his knees for the fuck and I’ve never quite forgiven Cronenberg for not letting us see at least a couple of moments of actual fucking, it still riles me up far better than most full-on sex scenes.
—Kal Cobalt


I admit it. I have a thing for adrenaline. Not the bungee-off-a-bridge kind so much. Something primal, uncontrollable and (a lot more) dangerous. Of course, if you can have all those things with a hot, dirty French guy, all the better. Submitted for your approval: Olivier Martinez and Diane Lane in Unfaithful. Which romp? Take your pick. But that scene in the open landing of his Soho apartment building … she storms out, he follows, and so ensues a short, hot fight that quickly turns lustful, breathy, desperate and ends with her keening for him, jeans and panties at her knees, to give it to her. There. Now…. That one’s a breath-holder. Few things are as alluring as something you really shouldn’t have. Especially when it looks like that.

Because I also have a thing—a very big thing, actually—for inappropriate comedy, honorable mention goes to Team America: World Police for proving that you can get just about anything past censors by using action figures devoid of genitalia. Puppet sex? Dirty, filthy, nasty puppet sex? That’s good stuff.


The movie: Baby Boy. The scene: after a rip-roaring fight about him cheating and her not taking care of him and making him feel like the man of the house, main characters Jody (Tyrese Gibon) and Yvette (Taraji P. Henson) have what can only be considered make-up sex. Make up sex does it for me just about every time.

It’s not only an arousing scene—arousing enough I’d have been a little uncomfortable in a public theater—but it’s also filled with an amazing feeling of love and tenderness and letting go of anger that you don’t normally see between two actors. It gives the impression of down and dirty sex between two people who love each other instead of some romantic, clean and tender, vanillified drivel. It’s got moaning and grunting and dirty talking, which never hurts. I mean, come on, dirty talk is hot and mainstream film totally avoids it for the most part.

But the best part, to me, has to be her eagerness to cook and clean and generally take care of him when they’re done. I can totally relate! Loving that good leaves you doing just about anything with a smile.
—Carrie Ann


Attention: the following digitized scene queued for recall may be fake, incorrectly credited, or otherwise confused by the author’s self-pleasuring imagination. Please silence your critic, step into sensation and experience the moment as I do.

Yes, the illicit love between Ralph Fiennes’ character and Kristin Scott Thomas as someone else’s wife in The English Patient yields vaguely satisfying onscreen chemistry, but nothing as relentless as the pull of shifting sand. The poetry of passion captured not in the frantic disrobing of two stylized actors, but in the tease of a warm wind building to a tempestuous crescendo—a blur of form and force merged—that leaves behind an irrevocably altered landscape, settled again into the stillness of climax.

Why tempt yourself to compare curves with Kristin or lovers with Ralph? In my archive of celluloid sex worth replaying, metaphor mainlines a lust undiluted by detail.
—Page Nolker


Definitely the scene between Salma Hayek and Antonio Banderas in Desperado. Aside from the fact that they are probably the two most beautiful people who have ever lived, the scene feels very realistic to me. The characters interact with passion, humor, and creativity. They change positions acrobatically, they incorporate props (remember when he runs the spur of his boot up her calf?), and they take their time—they’re at it long enough for the candles to burn down. It’s a great example of what sex should be.

Most striking, however, is the Hayek/Banderas scene’s juxtaposition with the scene that follows, between the “bad guy” and a woman who can only be assumed to be somehow in his employ. She is straddling him, screaming wildly while he passively smokes a cigar. She climaxes, leans forward to kiss him, and he blows foul smoke in her face. Then he pushes her off his lap and makes a phone call. It’s the ultimate in what sex shouldn’t be, and his callous attitude towards sex establishes his character quite effectively—and highlights the opposite qualities in Banderas’ character that make the “good guy” seem like a genuinely good guy. In short, probably the least gratuitous use of sex in film I’ve ever seen.
—L. Jade

I have several. Nudity is not a requirement as far as I’m concerned. Some favorites: Lauren Bacall propositions Humphry Bogart in To Have and Have Not. Jane Fonda seduces Donald Sutherland in Klute. Meg Ryan enlightens Billy Crystal at Katz’s Deli in When Harry Met Sally (“I’ll have what she’s having”). Jeremy Irons takes Meryl Streep in The French Lieutenant’s Woman.
—Luxury Holmes

As far as classics go, Fritz Lang’s Metropolis features one of my favorite nude scenes. It isn’t a sex scene, but the nude dancing is fantastic and surprising—bordering between hilarity and eroticism.
—Mrs. Melee


Oh man, there are so many, where do I begin? I have to say it’s a three-way tie between The Notebook, The 40-Year-Old Virgin and Mr. and Mrs. Smith. Each of these sex scenes brings something totally different to the table, satisfying my need for romance, tenderness and beating the shit out of each other during sex.

The Notebook sex scene is passionate and loving, the result of years of lost love and unrequited passion. I am a true romantic at heart and just thinking about this one gives me goosebumps. And nothing is more sweet and tender than when Steve Carrell’s lovable, endearing, virginal character finally breaks his cherry with his new wife in The 40-Year-Old Virgin. As for Mr. and Mrs. Smith, who doesn’t love a sex scene that involves oversized weapons, shattered glass and head wounds? ’Nuff said.
—Wise Young Mommy


The “I’m sexually interesting” answer is the 2006 film Destricted, a short film collection that combines art and sex from a bunch of ultra-hip directors and artists. The “wish it weren’t the real answer but it is because I’m secretly a bit of a goober” answer is Notting Hill. I’ve been obsessed with Julia Roberts ever since we literally bumped into each other in Heathrow and I saw how amazingly slinky and long her legs were up close. Yowza. Sure, she’s been in other movies with hotter sex scenes, but Notting Hill makes me think a mere mortal may win her over, so it works for me on that level too.
—Hungry4more


Since I’m queer, I’m going to pick two. First off is the scene from Bound where Gina Gershon & Jennifer Tilley’s characters seduce and screw each other for the first time. I love that this plays on the more stereotypical butch / femme roles, but Jennifer definitely expands the range of the usual “blushing femme” – and even if you’ve never had an attraction to butch women, Gina Gershon is hotter than a Reno brothel in August. My second favorite sex scene is the one between Brad Pitt and Angelina Jolie in Mr & Mrs Smith – it takes the adrenaline and violence of a to-the-death fight and converts it into what looks like the fuck of a lifetime. A close third is the interrogation scene between Demi Moore and Viggo Mortensen in GI Jane. Again, I’m a big fan of butch women, and throw in some rough trash talk and violence? Pass me the remote, please.
—Sarah Sloane


A few things spring immediately to mind—feel free to laugh along:
1. Ornella Muti’s whipping sequence in Flash Gordon (1980, d. Mike Hodges). I was but a wee young misanthrope when, in the dark of a Queens theater, I got my first whiff of Enhanced Interrogation Techniques—of a quasi-sexual candor. Of course I am referring to the infamous torture/interrogation sequence involving Klytus (a dude clad in black with a gold mask), General Kala (Klytus’ right-hand dominatrix), and the poor Princess Aura (daughter of Ming the Merciless and intergalactic space-hottie). Said interrogation techniques consisted of:
a. bondage by golden hand-manacles
b. whipping
c. “Bring me the bore worms.”

3. Okay—it’s not terribly mainstream, but I’m putting it here anyway: Conspirators of Pleasure (1996, d. Jan Svankmajer). A feature film which features no dialogue, Conspirators examines (in the strangest ways possible) the lengths people go to in order to find gratification. It’s not sexy in a smash-mouth sort of way; rather it slowly seduces one’s senses with its extravagance of weirdness.
—Misanthrope