Just How Tough IS It, Being a Straight Guy? 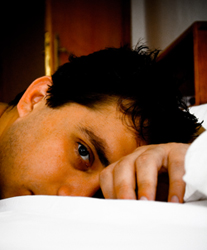 Oh, the plight of the poor, straight male! “Pity me,” he cries, “for the weight of my entitlement is mighty, and I am weary from too much testosterone.” Wait … What’s that sound we hear? Why it’s the world’s tiniest violin… playing just for you.
Okay, heterosexual guys, listen up. You’ve seen that hunk on the horse in the Old Spice ad, right?

You do not dare to say this out loud because it will elicit a major eye-roll from any women within earshot, all of whom know that it cannot possibly suck to be a heterosexual male—since it clearly does not suck to be the guy on the horse, or George Clooney, or Johnny Depp, who all naturally ooze precisely the amount of testosterone, at any given moment, that the average woman can imagine licking off their bodies.

We imagine, right then, that women want us to ooze similarly. For just a second, we contemplate buying the Old Spice, and then we remember that her dad uses it, and he is 50 or 80 or 100 years old—whatever it is you think is old—and we hastily set the thought aside. Ewwww.

So Kornheiser is out of the hetero guy club, as far as you are concerned. Tiger, also, is out, though not for the reasons you are hearing on the radio. You certainly do not kick a man out of the hetero guys club for sleeping with a porn star. You do not kick him out of the club for sleeping with … what … 15 other Tiger groupies, even if he is married with two kids. You kick him out for being such a complete world-class, lying dork about it. If you are a MARRIED straight guy, of course, you have to kick him out of the club for EVERYTHING, unless your marriage is non-monogamous by mutual agreement. You may even have to agree to help beat Tiger to death with a two iron should you ever have the opportunity, but the married with kids/straight guy club has tougher rules than the regular straight guy club, which is what we are more generally concerned with here. Married straight guys with kids could not watch the Masters this year without swearing an oath to root for Phil Michelson. Though that is not, by itself, enough for them to whine that it is tough to be them.

Here are the top three reasons we might think it is tough to be a straight guy these days, along with real, actual straight guy reasons why we would be wrong. The percentages are digital and highly scientific, having been made up by me, a heterosexual guy who has slept with the three women who told me they thought I might be gay when they first met me, one of whom occasionally still has her doubts.

Survey says: It is tough to be a straight guy because …

And—let’s face it, if the reason you are not having sex is because you cannot get a date, that does not mean that being a heterosexual male is difficult. It could be, simply, that you are not very good at it. Try losing some weight, going to the dentist, getting a haircut and expanding your range of approaches from your tried-and-failed “U make me so hot. Want to fuck” sent to random w4ms on Craigslist.

I go out on lots of dates but women won’t have sex with me (23 percent): This situation is almost enough to make a straight guy wish he was a woman, frankly, and is therefore a good reason to think that being a straight guy is really, really difficult. After all, women clearly can have sex whenever they want! They just have to go out with you, and there it is for the having! However, think about it. If you were a woman, would you have sex with you? Try putting yourself in her shoes; black pumps with three inch heels will do. Put on some lingerie and makeup. Now look in the mirror.

It’s amazing what guys will do when they are desperate, isn’t it? This kind of desperation is not pretty, and it will not get you laid. At least try to LOOK like a straight guy, for godsakes, and work from there.

My wife/girlfriend/FWB wants to have sex all the time, even during important televised sporting events (9 percent): Much as the rest of us would like to sympathize, we do not. This, too, shall pass. We look forward to meeting your lover on AshleyMadison.com someday soon.

So, you might ask, what about the rest of us? If we do the math, this leaves us with 21 percent straight guys who could complain about something, but realize we get laid more if we just keep our mouths shut and go about our straight-guy business. We laugh at the straight–guy jokes on TV. We don’t make excuses for straight guy bad behavior. We think that it is still probably harder to be a woman than it is to be a man and so we are feminists, or try to be. We are certain that it is more difficult to be gay or lesbian or queer than it is to be us.

We almost feel guilty about all of this, in fact. And, in conclusion, I know I speak for straight guys everywhere when I ask: “That guy on the horse—do you think he has a bigger dick than I do?”
Tags:
Views: 1378
Related articles

Other articles by Jeff Schult