Love, Wanting and Arousal: The Left Brain Lusts for Knowledge (Luxuria Part One) 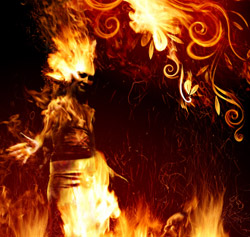 What DO women want, anyway? It's all chemical, baby - and complicated. K. Page Nolker pokes about in the left side of the gray matter and sees what's what.

What do Freud, Joni Mitchell and the scientific community share in common? They really don’t know love at all—much less desire. While physicists grope for a unifying theory of everything, sexologists, psychologists, anthropologists and neurobiologists mount their own search for the equally ineffable, grinding data in hopes of comprehending the brain’s role in both our physical and emotional experiences of love, lust and arousal.

Clinical conjecture and inconclusive data: why do you and I care? Let’s start with the joy and merits of sex. From Glamour and GQ to Forbes and Newsweek, the general consensus agrees safe sex not only feels good, it’s good for you. A quick Google search and you’ll learn about benefits ranging from the more obvious cardio fitness and stress reduction, to migraine relief, (correct, the headache no longer suffices as a valid excuse), immune enhancement, anti-aging skin benefits, improved sense of smell and a personal favorite, prevention of tooth decay. What better reason to engage in more sex than fewer trips to the dentist?

Health incentives aside, consider the vagina precedent. Once an uncharted black hole, plumbing its mysteries revealed a treasure trove of potential that launched a revolution and empowered women of all ages to seek satisfaction. Now imagine the possibilities inherent in knowing our own minds.

Weighing in as the largest sex organ in the body, and undoubtedly the most influential, our brain is of two minds. The left-brain, the hemisphere that obsesses over structure and reason, dominates the field of science, and provocatively both flames desire and erects our discussion. Expecting complexities, contradictions and only half the story, let us then plunge ahead with a left-leaning look at how science toys with the concepts of arousal, lust, attraction and attachment.

After their rousing success with male impotence, Pfizer, makers of Viagra, turned their attention to the second sex. Estimating—and by some accounts inflating—that some 30% of women complain of deficient desire, the company spent nearly a decade testing thousands of women only to conclude that sparking arousal does not start a fire.

Scrutinizing the same body-mind split demonstrated, to one degree or another, in 130 studies by other scientists, Chivers theorizes that evolution may explain women’s reflexive sexual readiness. In automatically lubricating to any hint of sex in her surroundings, the ancient female protected her vagina from potential injury. Influencing her theory of two distinct systems, Chivers cites a body of evidence reporting that many assault victims note lubrication, with some claiming orgasm, despite the unwanted nature of their physical attack. Certainly, one may assume that women correctly know their own minds when they claim an absence of lust in response to viewing amorous apes, and yet their physiological reaction to the bonobos spiked slightly stronger and faster than to the Adonis beach walker, suggesting yet another possible site line for understanding the gulf between body and mind. Lacking an erection, the man on the beach offered no visual clues of sexual intent.

Fisher’s research includes studying marriage and divorce in 58 societies, adultery in 42 cultures, patterns of monogamy and desertion in birds and mammals, gender differences in the brain and behavior, biological personality typing, and the brain circuitry of infatuation and rejection. Beyond emotion, romantic love, according to Fisher, operates as a biologically based addiction with an agenda. Involuntary, tenacious, exceedingly difficult to control, and obsessively focused on a single reward, intense romantic love outstrips even the most robust sex drive as a primary motivation system.

Humans, according to Fisher and her colleagues, exhibit three distinct brain systems, circuitry evolved over millions of years designed to choreograph our mate selection and reproduction. Kicking into gear first, our libido propels us out into the world to canvas a wide range of potential partners. Filtering according to looks, socioeconomic background, intelligence, religious values, humor, social goals and even scent, once we narrow in on our target, chemistry takes over and reason gets sidelined. Characterized by a burning, all-consuming passion, brain system two—attraction—evolved to facilitate and focus our courtship time and energy on a specific someone.

Performing functional MRI brain scans on 39 people—17 newly in love, 15 recently dumped, and 17 claiming to be still in love after an average 21 years of marriage—Fisher and her colleagues confirmed their hypothesis that the universal experience of romantic love activates neural mechanisms in regions of the brain rich in dopamine, a neurotransmitter associated with reward and motivation. Physiologically functioning like an addiction, the attraction system creates a homeostatic imbalance, distorting reality and increasing our tolerance for risk in the pursuit of our prize. Operating well below our cognitive and emotional processes, this goal-directed circuitry, unfortunately for the unrequited, revs into overdrive and goes for broke when thwarted.

Then again, “there are two great disappointments in life: not getting what you want—and getting it.” Never truer than in love, biology evolved our third brain circuitry—attachment—to fire into action as the ardor of courtship cools with conquest. Triggering a new region of the brain, the attachment system stimulates increased production of oxytocin and vasopressin, hormones associated with deep emotional intimacy, calm and security, qualities that enhance relationship stability and, Fisher conjectures, motivate couples to continue tolerating one another for the sake of parenting.

Craving and Intimacy: A Sticky Wicket

Dr. Meana disagrees. In Meana’s view of the complex and idiosyncratic nature of lust, intimacy frequently douses desire. Researching and working directly with women who suffer dyspareunia—vaginal pain associated with intercourse—Meana sees a pattern of women in long-term relationships losing interest in sex sooner than their male partners. According to Meana, the desire to be desired penetrates the truth of a woman’s pleasure—the narcissistic yearning to be the object of her partner’s erotic drive and sexual need. In the context of a long-term relationship, choice becomes assumed, and the passion stoked by pursuit diminishes. Augmenting her theory, Meana’s studies of visual attention found that while men ogle their gender of choice, women gaze equally at both sexes, processing the facial expressions of the male lover while studying the female body for clues of what makes her alluring to her partner. What a woman wants, according to Meana, involves being wanted.

Meana’s assertion fits with Chivers’ more recent findings that women—subjectively—appear more turned on by audio scenarios of sex with strangers, than with friends or long-term partners. In addition, both Chivers and Meana cautiously discuss the prevalence and significance of submission fantasies, with research showing that between one-third and one-half of all women report entertaining the imagined thrill of being ravished. While supporting the theory of narcissism, both women stress the difference between the real terrors of aggression and the private domain of fantasy.

When even celebrity sex icon Madonna makes tabloid headlines with her flagging sexual relations, it seems hard to dispute the gulf between lust and love. Coined “bed death,” sexless relationships appear epidemic, popping up everywhere, from Madonna and Guy to The L Word. Could Meana’s theory be right, without the stimulus of pursuit we prefer to cuddle and tuck in? Dr. Pam Spurr takes a different view of the situation, and holds both parties responsible. In a sample of more than 400 respondents gathered over a three year period, Spurr found that once the erotically-charged honeymoon phase ends—what Dr. Fisher would likely term the obsessively-focused attraction system—couples resume their former activities, such as exercising and socializing, and fail to find balance. Spurr observed that 90% of couples discontinue experimenting or incorporating any new sexual experiences into their repertoire around the one year mark, and past what she calls the “two year turnoff” abandon erotic exploration entirely. Routine and uninspiring, motivation dwindles, dopamine dips, and the sexual relationship flounders.

The Long and Short of What a Woman Wants

It seems transparent enough, despite the tangle of data, that a woman wants it all, and why shouldn’t she? Mutual sexual gratification, not reproduction, according to British zoologist Desmond Morris in his seminal 1967 book The Naked Ape, explains our wild urge to copulate. Given that modern intimacy both stimulates and diminishes longing, and arousal too often fails to get its message through, how do we harmonize the yen and yang of our bodies and minds? Instead of asking what a woman wants, let’s get down to business and uncover how we get it.

Part Two of Luxuria will follow next week.
Tags:
Views: 1448

K. Page Nolker
A writer and consultant, Page waxes poetic on the subject of sex as her pro bono plug for a carnal cause.

Other articles by K. Page Nolker