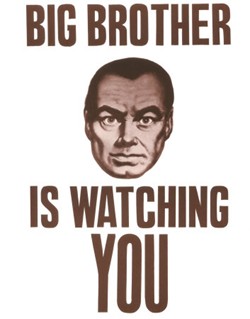 What is sex itself were hauled before the FCC and forced to defend itself? G.L. Morrison considers the twists, turns, and inherent satire of such an eventuality, in Act III of this three-part satirical (we hope!) look at freedom of speech.

Announcer: We will return to the special three-part episode of Law and Odor: FCC after this message from our sponsors.

Leering Actor: Enhance your, um, maleness. The bulge in your confidence will improve your golf game, get you a promotion, impress your friends and intimidate your enemies. No longer be afraid to wear tight pants and leave your zipper down.

Voice Over: Side effects include baldness, halitosis, impotence and death. (Fade out.)

F. Lee Bailey stands and points his ass at the bench.

A voice from F. Lee Bailey’s back pocket: I object.

Justice Judy-Scalia-Vader: Counselor, is there a litigator in your pocket or are you just happy to see me?

F. Lee Bailey: Like I always said, Your Honors, the Law is an ass.

Justice Judy-Scalia-Vader: (The Scalia head) I think it was Shakespeare that said that.

F. Lee Bailey: (Modestly) He was quoting me.

Fuck: (Aside, to Shit) It was Dickens…

Justice Judy-Scalia-Vader: Do you or your ass have a point or are you objecting to stay in practice?

F. Lee Bailey: The point is if you mean what you say but don’t say what you mean, then soon we’re all living in looking-glass land.

Justice Judy-Scalia-Vader: Words mean exactly what I tell them to. No more or less. You’re clearly undisciplined.

F. Lee Bailey sits on his ass to muffle any more of its objections.

Atticus Finch: (Rising Peckishly) What is objectionable about a cuss word, exactly? Is it the word or what the word is meant to describe that is obscene? Can an arbitrary collection of syllables be obscene? May I respectfully remind the court that Judge Judy herself has written a book entitled Don’t Pee on my Leg and Tell Me It’s Raining, and yet Piss is on trial today.

Justice Judy-Scalia-Vader: (The Judy head) That depends on how it’s done.

Justice Judy-Scalia-Vader: (The Scalia head laughs) For many years I protected individual states’ right to outlaw the obscene acts of sodomy.

Atticus Finch: We’re talking about the words now, Sir. If the act is too obscene to speak of, then why can you say sodomy but not assf*ck?

Johnny Cochrane: Look at the words on trial here today. Five of the seven words are four-letter words. You can say Vagina all day long but not one C-U-N-T. That’s profiling, plain and simple. Four-letter words—you’ve condemned them before you even heard them.

Justice Judy-Scalia-Vader: (The Vader head) The fours is strong with them.

Johnny Cochrane: Except for Shit, you must acquit.

Beaver: (In the gallery) Where?

Fuck: (Looking around) Is Damn here?

Shit: No, you asshole. (Giggles) I said asshole.

Tits: You realize that all toilet humor is basically the same joke over and over.

Tits: Jerry Lewis is big in France. Still not funny.

Bailiff: All rise. Their Honors will take a short break for station identification and to watch the outtakes from last week’s episode.

Cocksucker: (Whining) I don’t understand why I am here with these motherfuckers. I’m not four-letter freak. I’m as white, Protestant and American as the apple pie that teenagers shove their dicks in. I’m not a bad word. I’m a good word. A really good word. Without cocksuckers, there would be a lot of unhappy dicks in the world. I should get a medal for bleeping community service. I’m a freaking ambassador for world peace.

Motherfucker: You say motherfuckers like it’s a bad thing. You and Freud with your cigar-nibbling Oedipus complexes. (Adjusts her wimple.) It’s Holy Motherfucker to you. Or you can call me Motherfucker Superior.

Cocksucker: (Snaps) I’m not calling you at all, girlfriend. Give your digits to someone who gives a fuck.

Cunt: Me. Give your digits to me. Mmm, Mama, you know how I like it.

Bailiff: Court is once again in session. The honorable Justice Judy-Scalia-Vader presiding.

Senator McCarthy: I’d like to recall The First Amendment.

Justice Judy-Scalia-Vader: (To The First) You are still under oath.

The First nods, and re-takes the stand.

Senator McCarthy: Do you recognize this? (He flourishes a gun dramatically.)

The First: No. You want my brother, the Second Amendment. I don’t know a derringer from a double entendre. I’ve never seen that before. And no it’s not my gun.

Clarence Darrow: (Swooning) He killed her! He killed the First Amendment. Your honor, I object!

Justice Judy-Scalia-Vader: I thought you might. Can the Prosecution explain their actions?

Senator McCarthy: It was self-defense.

Senator McCarthy: She was poisoning the minds of the jury and the nation with her honeypot.

Senator McCarthy: And her rabble-arousing ideas.

Fuck: I think he means me.

Senator McCarthy: It was inevitable.

Clarence Darrow: Your Honor, this is outrageous.

Justice Judy-Scalia-Vader: Senator McCarthy does have a point. She irritated a lot of people. One of them was bound to put a bullet in her.

Clarence Darrow: What are you saying?

Justice Judy-Scalia-Vader: (The Judy head) The tramp was asking for it.

Justice Judy-Scalia-Vader: (The Vader head looks around the courtroom meaningfully) One down.

Senator McCarthy: (Waving the smoking gun) It’s not relevant to the case at hand.

Senator McCarthy: As the defense pointed out earlier, The First Amendment wasn’t on trial here.

Clarence Darrow: You executed her anyway!

Justice Judy-Scalia-Vader: What’s done is done. Let’s move the show along, Gentlemen. Since no one has any more questions for this witness. (Bailiff removes riddled corpse of the First Amendment.) Prosecution, you may call your next witness.

Justice Judy-Scalia-Vader: Defense is up to bat.

Clarence Darrow: Recent developments put a major hole in not only our primary witness, but our case. The Defense requests a continuance.

Justice Judy-Scalia-Vader: Denied. This is a one-hour show.

Defense team mutters amongst itself. Defendants are surprisingly subdued, watching McCarthy playing with his pistol.

Clarence Darrow: We need a strategy.

Perry Mason: I need a cigarette.

Ben Matlock: We can have a strategy meeting at my club. Put on our thinking caps and golfing shoes.

Johnny Cochrane: You mean THEY wouldn’t like me. You racist son-of-a…

Perry Mason: Anyway, someone has to stay here.

Johnny Cochrane: And that someone is me because?

Atticus Finch: You’re the best man for the job. Give ’em shit ’til they acquit.

Johnny Cochrane: Don’t bullshit a bullshitter. (To Shit) You stay out of this.

Shit: How can I when you keep dragging me in?

Justice Judy-Scalia-Vader: Gentlemen, do you have a witness, or are you ready for my verdict?

Johnny Cochrane: We…by which I mean “I”…call the High Commissioner of the FCC to the witness stand.

The High Commissioner is seated without swearing. No one would dare suggest it. Or could afford it.

Johnny Cochrane: Your High-ness, how do you know something is obscene?

High Commissioner: You just know an obscenity when you see it. It’s like a second sense.

Johnny Cochrane: Would you take a look at this document, Sir? (Hands him paper) Do you know what this is?

High Commissioner: It’s our statement of revenues collected from fining TV stations, radio stations, musicians and entertainers who aren’t fast enough with their bleep buttons. We call it The Naughty List. They’ll be getting coal in their stockings.

Johnny Cochrane: Coal that you turn into diamonds. This figure is in the millions, isn’t it?

Johnny Cochrane: Morality is big business. And this is just one annual report?

Johnny Cochrane: Doesn’t this amount of money strike you as…hmmm…OBSCENE?

High Commissioner: (Takes out his checkbook) How does this amount strike you?

Johnny Cochrane: Like Sugar Ray Leonard. Is that a decimal?

High Commissioner: (Scribbling on the check) Not any more. Now, it’s a comma.

Johnny Cochrane: (Takes the check) You fucking with me?

High Commissioner: This shit’s for real.

Johnny Cochrane: Your Honor, the Defendants would like to change their plea to Guilty.

Justice Judy-Scalia-Vader: So noted. Then the Defense rests?

Johnny Cochrane: (Fanning himself with the check) Rests? Sweetie, with this, the Defense retires!