How to Write Smut 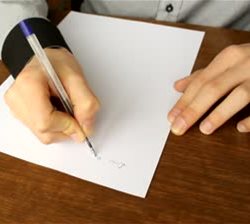 The first step is to think of a scenario. Written erotica is a great way to explore fantasies you don't want to, or don't have the ability to, act out in real life. Just make sure, if you're sharing with a partner, to make it clear whether or not this is really something you'd like to try.

Once you know what you're writing about, it's time to put pen to paper, or fingers to keyboard.

It's also how I can write things I wouldn't personally do. For example, I once wrote a story that was mostly about rimming- something I'd never do in real life, and don't find all that arousing. I wrote it off a prompt. What got me into the story was exploring the psychological element of the characters I was writing for- the dominance and submission aspect, the intimacy, the pleasure that comes from pleasing a partner. Because these are all things I can relate to and understand, I was able to get into the swing of writing the story. This way, I don't have to be into every single aspect of what I'm working on- in fact, if I was I probably would never get anything done because I'd get too turned on!

It's getting into the process behind something- behind why something is desirable- that takes a fantasy and turns it into something I can write up and share!

Getting the words down

This can be one of the hardest parts. We have a culture that really stigmatizes talking about sex. It can often be hard to even find words to talk about intimate body parts that don't seem gross or obscene.

For example, many romance novelists refer to the penis as the "member"- among many more, often really amusing, bits of purple prose for the private parts. I personally find this a bit of a turn off, not to mention a bit cringy to read as someone who usually tries to write things that are readable as fiction, not just as erotica. It's up to personal preference. Try some different things and choose what works for you. I find "cock" the best word, followed by "dick" and sometimes "erection" (obviously depending on context). That might not be the same for you! My biggest piece of advice is not to be afraid of repetition. You do not have to find a different way to refer to genitals every time, just like you do not have to find a different name for your character every time! Just repeating whatever word you find best is completely fine.

As for other parts of the writing process: when I'm writing a story, I usually start with the two characters discussing the sex they're about to have. Some people don't like this, but I like to make sure consent is clear. This isn't a must, though- if your fantasy involves somebody being suddenly shoved up against a wall, start there! Fantasy is fantasy!

When I'm sexting, it usually starts pretty simply- me and my partner lying around in bed together, and then progressing much the way sex does when we actually have it.

Another good way to get started is with the moment of arousal- that is, you can start by expressing that "I saw you doing/wearing/saying x and couldn't stop thinking about doing y to you" before going into all the ways you'd like to do y, exactly.

Getting it out there

Then it's time to send your work on! The only thing I have to share for this part is to remember that it's not that important- this is for fun and arousal! If you don't get the response you'd hoped for, remember this can be a low-stress way to put your fantasies out there. Everything doesn't have to be riding on it.

And either way, keep trying. Writing smut, like writing anything else, is a learning process.