Sex and Babies: Can the two co-exist? 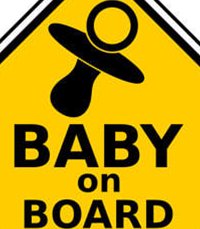 "Having a child is surely the most beautifully irrational act that two people in love can commit."

Sex before babies, and sex after are two completely different creatures. Before our daughter we were limited to how many hours a day we could stay awake (and often, how easy the other person was to rouse when we were awake and they were not!) Since her birth, there has been a need for planning, frequent interruptions and adjustments to our expectations and desires. It's taken some time since having our daughter, but we have managed to get back in to some sort of routine, and I'm confident you can still have a healthy sex life after having children.

For most, healthy and normally progressing pregnancies, sex is not only okay, it's healthy!

Some women feel beautiful, radiant, and glowing! Others spend much of their pregnancy praying to the porcelain gods and cursing their partners for putting them through this "wonderful" experience. Some women cringe and recoil at the thought of being touched, other's can't get enough.

I was the latter. I became a sex kitten for my entire pregnancy. Our sex life was amazing, and probably the best it's ever been. I'm pretty sure about 75% of the reason I want to have thing #2 is for the great pregnancy sex.

Not all women feel this way though, and not all men feel comfortable having sex with their partner while they're pregnant. The belly can be awkward, it can be daunting when baby kicks at just the right (wrong!) moment and things down there can be... different. Sometimes for medical reasons women can not engage in sexual activities during pregnancy, either because they or their baby are at risk of complications.

Fear not though, for most couples there does come a time where sex can be enjoyable again, and in the meantime it's important to keep the connection and intimacy in other ways. Spending quality time together, massages, cuddling. Whatever makes you and your partner feel close. This is especially important for the women who have been placed on bed rest, or pelvic rest for the remainders of their pregnancy.

The first 4-6 weeks after a baby is born, women should refrain from intercourse and penetration. The cervix is still open, and introducing foreign objects or body parts can lead to infection of any tears, surgical sites or the uterus.

After 6 weeks, the couple may feel wary of engaging in sex again. The thought of potentially making another baby may be terrifying. The woman may be afraid it will hurt, and the man can sometimes be a little shell shocked after witnessing a delivery. We again attempted to maintain intimacy, and we found other ways to pleasure each other without engaging in intercourse during this time.

Once you are ready to have sex, when do you find time??

We made time, but not often. To be honest sex was more on my radar when I couldn't do it than once I could. We were tired, often taking shifts. Our daughter was a very easy newborn, but we had struggles with breastfeeding that required a lot of time and effort on my part, and not a lot of sleep. With so much to do and so little time, it's important to prioritize sex, and occasionally let some other things go. I assure you, the house will still be just as messy and the laundry unfolded tomorrow, but your bond with your partner may slowly fade if the effort to maintain a connection isn't there.

The funny thing about having a newborn is that you learn to run off some sort of new parent euphoria, combined with a delirious lack of sleep, topped off with some sort of foreign adrenaline. Quickies on the living room floor while baby napped were fairly common. We never knew quite how long we'd have, so we always made it quick. We most often had sex in the middle of the night after one of many night nursings, though, somehow running off the aforementioned adrenaline and euphoria.

And That Brings us to Sex and Breastfeeding...

If you choose to breastfeed, you should know this: Orgasm can turn your nipples into geysers. It's not unusual for a woman to lactate at least a little bit while aroused and that can be off putting for either partner. Some women are uncomfortable (some literally, the girls can become quite sensitive!) with having the ladies touched when they belong to baby, and some men aren't quite sure what to do with them when they're making milk. Other couples find it quite erotic and sensual. Either way, it's completely normal. Discuss what concerns you have with your partner, and work together to find something everyone is comfortable with. My partner wasn't overly uncomfortable, but he was reserved. He refused to use his mouth on me anymore, but was still open to stimulation. I didn't mind it, but I did get a shot of milk in the face once or twice!

Somewhere in the haze of newborns and sleep deprivation, things start to calm down. Baby is older now, in general sleeping a bit better, or at least more predictably. Things are starting to find a new normal. It's at this point that many couples resume a more normal, routine sex life. (Ladies, at this point if it is still painful I highly suggest you seek a doctors guidance - there are many conditions, most easily treatable, related to birth and breastfeeding that can cause pain during intercourse.)

But, sex is still different. Your time is limited. It's hard to feel sexy when little Suzy has been hanging off you, snotting and spitting up all day. When you do have sex, you have a 50-50% chance of making it through an entire session, and you still feel rushed. The first few times baby wakes, or makes a peep, will be incredibly off putting and can ruin the mood, even if you don't end up having to tend to baby. I can't tell you how many times we had to quit because I could hear her making noises in her sleep, and it just ruined my concentration and desire.

You eventually learn what noises mean baby is up, and what noises are just sleep noises. We have learned to turn the monitor down so it's at least not as jarring if she does wake up! You learn how to adjust to baby's schedule. You may however still be learning to enjoy sex again as well. I felt uncomfortable with my postpartum body, and because of some complications many of my favorite positions were still some what painful. We struggled to keep our connection strong, and at times it felt like we were teenagers fumbling around in the dark again, instead of long term lovers.

Suddenly You Blink, and Baby is 8 months old!

They're on a more reliable routine now that they're older, you can plan around feedings and naps for the most part, and most days bank on a certain amount of free time while they sleep. But, baby is mobile (or almost) now, sleeping longer but less frequently and eating solids. This means dishes to do, food to make (if you make your own baby food) and less time to do it! My daughter was crawling at 5 months, and walking just after 9. To say she's been busy is an understatement. Some days I didn't (still don't!) even manage a shower, let alone sex. I thought it would get easier as she got older, but I lucked out with a super active, although incredibly well behaved kiddo, and my free time is even less. But, she's for the most part incredibly predictable. If I need to, I take a bath after she goes to sleep, and then the fun begins. I can usually depend on at least a good 4 hour chunk, if not the entire night. It's only been in recent months that we've really been able to take our time, and explore each other again. Sex has been getting better and better as she gets older.

But, now she plays when she wakes up. She has this darn stuffed puppy in her bed that sings and talks. Old MacDonald on more than one occasion has interrupted our sex life. With a woof woof here, and a woof woof there. We lay there, quietly, trying not to laugh and trying very hard to keep our head in the game. We wait...silence....WOOF. Crap, still awake. 5 minutes pass, not a peep. We're back in business! It's taken a lot of time to get to the point where we can be interrupted by nursery rhymes blaring through the baby monitor and the occasional baby conversation with herself and keep going afterwards, but we're there.

Once you get comfortable with the fact that there is a little person in your house who may at any moment interrupt anything you're doing (sex, showering, sleeping, playing Candy Crush) it's a lot easier to deal with those little interruptions.

Over the past year we have often had to schedule sex in, to make sure the other person was on the same page and that we both made a point to keep our eyes pried open long enough. It was difficult to do in the beginning. It felt forced, and the anticipation wasn't there. We've worked on it though, and found ways to make it fun and just as exciting, even if it's planned. I do think it's important to make time for sex, even if it means scheduling it in. There have been periods of time where we have gone way too long without, and it's had a very direct effect on other areas of our relationship. We are parents, but we're still lovers, too!

Our daughter is now nearly 13 months old, and we are beginning our adventure into toddlerhood. New challenges to our sex life are to come, but I feel confident that if we made it through the baby stage intact, we can face whatever else comes our way!

* I feel it's important to note that some couples take much longer to resume a normal sex life. Postpartum depression and other complications can cause a the woman to have a very difficult time with sex and intimacy. Men can also experience some trepidation when it comes to sex. Sometimes the desire is just simply over-ridden by all the new demands of parenthood, or a colicky and fussy baby. This is entirely normal, too. But it's important to keep communication clear and honest, and find other ways to connect during this time. A hefty dose of understanding and compassion is also essential. And, if necessary, consult a doctor or other professional for help with whatever issues may be causing problems in the bedroom or otherwise!
Tags:
Views: 1504
Related articles

Munko
Stay at home Mommy to a one year old looking to get my groove back (If I can stay awake long enough!!)

Other articles by Munko