Submission in a few of its forms. 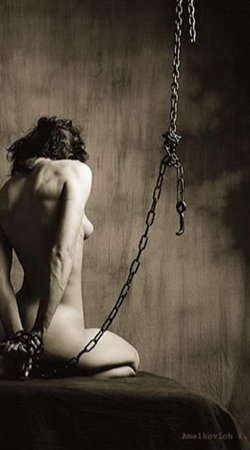 Igor Amelkovich Photography
There are as many ways to submit as there are people in the world submitting, but there are a few different ways that these get lumped together.

Submissives are those that are the ones being dominated. They give up a certain amount of control, whether physically in the case of bondage or psychologically, to another person. This loss of control is negotiated and has boundaries. A submissive is typically in or seeking a relationship with a dominant. The exception to this rule is switches, but that is another article. Submissives may not be submissive outside of play. In fact, some submissive I know are loud and in charge until they are in a scene.

Slaves are submissives that have given a large majority of power over to their dominant, or in this case master. They negotiate a contract that lists their terms of service before entering the relationship of master and slave. Sometimes this means that they have absolutely no rights to an opinion at all while some relationships aren’t quite as strict. Slaves typically wear some kind of collar or necklace at all times to symbolize their slavery, but some submissive do this as well, so just because you see a collar doesn’t mean you are talking to a slave.

Oh, brats. I am a brat when I am submitting. Actually that is the wrong word. Let’s try that again. I am a brat when I am bottoming. Brats don’t submit like other submissives do. They act out. They insult or yell at their dominant. They break rules. They don’t submit prettily or cleanly. They make you work for it. They force you to prove why you are dominant over and over again.

There are two loose reasons why they do this from what I can tell from talking to other brats. Some act out because they simply enjoy being punished. They are disrespectful to their dominant because they like what the consequences are. They test limits and boundaries because they are driven to by whatever powers their submission.

The other type of brat may not really even be a submissive in the classic sense. In this I am speaking from my own experience. I challenge my dominant because I need them to prove to me every time that they are more dominant than I am. I walk into play fairly certain that my dominant is going to “win”, but I also walk in intending to make him earn that win. That is also a brat.

There are other terms. Bottom is a generic one, but one also used by gay men to describe who is the recipient of sex. Bottom means the person that is giving up control, much like the meaning of submissive. There are also categories for pet play like puppy or kitten. This is when people are interested in tapping into their animal side. There is age play in which consenting adults engage in role-play in which one takes on a child role while the other is the parent. This is only done by ADULTS. This isn’t an excuse for pedophilia. People who engage in age play are not pedophiles. There is a dynamic of domination and submission that is unique to this type or role-play. It’s really not that different from teacher and naughty student role-play that is a bedroom staple for many.

There are so many terms used to describe submission. These are just a few of them.
Tags:
Views: 2264