You want to do what? 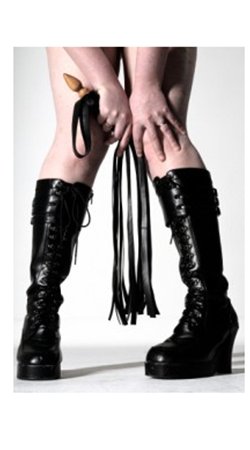 "If you come to a negotiation table saying you have the final truth, that you know nothing but the truth and that is final, you will get nothing."

The first question that should be asked is, “would you like to play with me?” Without that, there really isn’t a reason to negotiate. Once you have that out of the way, you will want to discuss what exactly you both would like to do together. Do you want to spank each other? Talk about it and create a rough list of things you would like to use and do.
I will always list what kinds of pain I prefer here. I like thuddier pain rather than stingy pain, and I inform the possible play partner of such.

I won’t do XYZ

Everyone has limits. There is something that deep down makes them feel ick or there is something that they just can’t physically do. I was beaten with a leather belt as child, so I have a deep instinctive fear of the sound of a leather strap against flesh. One of my hard limits is that sound. I will not play with a person that demands to use a toy that makes that sound. Additionally, I have a chronic pain disorder, so some days I can’t do or handle certain types of play.

I need purple monkeys to wank me while I spank you

I have a very strong desire to be put into bondage by whoever is topping me. It totally helps me get into the right space for play. I don’t HAVE to have it, but it helps a lot. I know of other subs that require it. Some dominants require their subs be bound. Some subs require that they have genital stimulation or no genital contact at all. Some subs require that they be flogged until they can’t stand. I know of a dom that hates having his subs act like they don’t like it. I couldn’t play with him because I am a brat, and I don’t really want it. This is important to discuss so both parties know what is needed. If you can’t agree, it is fine, but you probably don’t want to play together.

Many people will pick a safe word. Sometimes the sub picks, sometimes the dominant does. Sometimes they pick something together. This is a whole other discussion really that I covered in its own article, but the important thing is that you set a safe word. Something other than "No." No is something that needs to be respected in many contexts, but too often a scene may involve a level of roleplaying that blurs that line. A safe word has to be something that won’t be said normally in a scene. My dominant and I don’t like using the ever popular “red” as a safe word because he uses it to describe what he is doing to me all too often. Instead, we picked a phrase from a web series that we both love. Whatever it is, both agree to it verbally.

At this point, you can still decide not to play. Let me say that again. YOU CAN SAY NO THANK YOU. The other party needs to do something you aren’t comfortable with? Say thanks but no thanks and move on. You don’t have to agree. That is the important part of negotiation. If you are comfortable, verbally agree to everything you have discussed. Be clear.

Pushing the limit or not?

If it’s your first time playing together, don’t feel the need to run all the way to the line. I recently played with a good friend of mine. We are both very comfortable with each other and know our play styles. They aren’t a perfect match, but they do overlap enough for us to have fun. I bottomed for her. She didn’t restrain me, and I didn’t ask for it. She knows it is a component of my submission, but I don’t need it, and if I am in bondage, it puts more pressure on her as my top. She picked toys that weren’t going to inflict a lot of pain because she didn’t want to go too far with my health issues until she got a better idea of them. I scaled back my brattiness so she could get a better idea of how that would work between the two of us.

Did we each get the limit pushed? Not at all, but we did get a good feel for each other for future play together. We still had fun. It’s okay not to go all the way to the max. My dominant and I like to play on 11. In fact, we as people do everything on 11, but sometimes, in a new environment, with a new toy, or trying a new act, we scale it back and feel things out.
Tags:
Views: 1779