Capturing the Face of Orgasm: In & Out with Richard Lawrence, Founder of Beautiful Agony 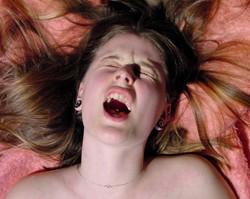 Beautiful Agony
Real people, having real sex… by themselves. On camera. On the Internet. From the neck up. Each video is an intimate portrait of individual orgasm, and it’s the stuff that Beautiful Agony is made of. When it comes to “the money shot,” can reality be more erotically charged than fantasy? According to BA founder Richard Lawrence, yes, it can indeed.

What is the appeal of Beautiful Agony over offerings from more traditional studios?


Let’s talk a little about your business model and content. I’m assuming the overhead is extremely low?

The contributors are all paid, and the site gives the details where you’re invited to submit your own Agony. I don’t know that Agony even makes a profit. It’s hard to say because it’s one of several sites we run commercially and they share overhead, but there are significant expenses and not all that many members compared to what I imagine mainstream sites might have. We have a full-time editor and people doing admin, and we still loan out cameras to local contributors where we can, so there’s probably a lot more going on behind the scenes than you might imagine.

[My partner, Lauren] goes through the process of sorting the videos, and some people, despite their best intentions, seem unable or unwilling to let go of the idea that this is documentary rather than performance. So, the choice is subjective to some extent, but if you were to look at the videos at the back of the drawer you’d probably agree that they don’t capture the rapture of the human face in orgasm.


You say that these videos are documentary, rather than performance…

There is a whole other side to Beautiful Agony that many people overlook, the section called “Confessions.” In these interviews or self-filmed revelations, the “Agonees” tell us—usually very frankly—all about their sex lives, and their stories are often remarkable.
One of my favorites is the well-spoken 20-something who decided to try out her new sex toy on the commuter train home, only to find that the lock on the bathroom door didn't quite work, much to the astonishment of an older lady passenger… After listening to a few of those stories you start to take a bit more notice of, well, things.


I’ve noticed in the sequences I’ve watched, that although the people seem very “real,” each video seems to have such a soft, ethereal look to it—a consistent one. Is that your doing?

Not at all. If you go through the process yourself, you’ll find it’s a bit like getting gassed at the dentist: you’re flooded with a sort of warm feeling of liberation. It’s hard to describe. Try it. Then send us your tape!
Tags:
Views: 3651
Related articles