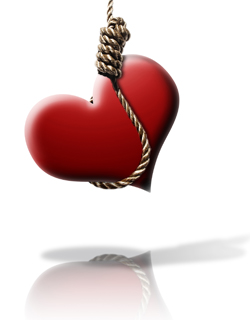 Dateless? Don’t sulk. Buy yourself an Oreo cheesecake, a pair of shoes or a night at the girly bar and count yourself lucky this stuff isn’t happening to you.
Valentine’s Day can be as polarizing as politics. Sure, there are extremists on either side of the fence, rabid lovers and haters of all its Hallmark accoutrements, but most of us fall somewhere in the middle. Being the small, gooey ball of nougat I am, often strategically encased in a sleek, protective candy shell, I’ve spent a few V-Days past casually not caring about it. And mostly I don’t (though the guy who bought me 50 tulips and a ridiculous-good bottle of tequila totally got lucky). It’s not that I don’t like candy or jewelry, but if you really want to wow someone, conceive of buying those things—or a gift you know he or she would really love, something intimate, thoughtful, personal – when it’s not Valentine’s Day. Do that more often and any reasonable human being should embrace the idea of staying in, watching action-thrillers and eating Chinese out of the carton instead of demanding four courses of overpriced fondue. And whatever you do, try to avoid most of the below.
***
“I’ve always kept my bikini line in check with a razor, but last year, for our first romantic weekend away as newlyweds – our wedding was right around Christmastime and we were going on one of those two-night cruises for Valentine’s – I decided to go to get a Brazilian and surprise him. I’d never been waxed before and in hindsight should have asked some friends for recommendations because it was a disaster. They didn’t give me proper post-wax instructions and I ended up getting these nasty, red bumps that hurt like a mother! They were also pretty hideous to look at. I managed to find a cute pair of board shorts to salvage my sunbathing time – and we got pretty wasted on free umbrella drinks – but sex was relegated to multiple blowjobs for him and extra dessert at the buffet for me. You know, now that I say it out loud, it really wasn’t that much of a nightmare, was it? Especially for him.”
Janine, 32

“Valentine’s Day has been kind of a sore-spot for me since college, when a girl I’d been dating, and was totally nuts about, told me she was also seeing someone else and he’d already called dibs. She actually said that, totally casual. And we’d been going out regularly for two months. Isn’t that something you should share with someone you’re seeing? Anyway, I always think about it whenever I see those chocolate heart boxes in the store. I had this huge, expensive one on the table in front of me when she dropped this bomb on the phone. They remind me of what a chump I felt like. I gave it to my mom.”
Michael, 36

“You know, when I was younger and single, I always felt like me and my friends should go out on Valentine’s and whoop it up. But when I think about it now, we always drank too much and got too loud. I think we were trying to convince ourselves we didn’t give a shit.”
Sarah, 45

“If I don’t have a date for Valentine’s, I get a bottle of red wine and a couple of non-romantic movies I’ve been wanting to see and chill at home on the sofa. I even buy myself a box of chocolates and eat it myself. So what if I don’t have a girlfriend; who says I can’t treat myself?”
Jenn, 39

“Does it count if you’re pretty sure you got the crabs on Valentine’s Day, but didn’t find out until about a week or so later?”
Mike, 42

“How about a Valentine’s Day where you’re out with a new boyfriend at a local hangout, playing pinball with all his friends – who you’re mostly meeting for the first time – and you realize, only when a passing waitress takes pity on you, that they’ve all been laughing at the fact that you came out of the bathroom with your dress hung up on the back of your underwear? Thank God I got better at choosing men after college. Now that I think of it, maybe that ass was my turning point.”
Carole, 58

“It was a terrible Valentine’s Day in that I couldn’t get a cab because it was raining. My shoes got wet, my hair got wet, I looked and felt awful by the time I finally made it downtown to the restaurant. I complained and whined and bitched for 10 straight minutes from the second I sat down. And when I finally shut up to take a sip of my wine, he smiled and slid the little box across the table at me and said, ‘I will always love you, even if you look and smell like wet dog.’ We have been married for almost 20 years. And I love it when it rains on Valentine’s Day.”
Jodi, 50
Tags:
Views: 1900
Related articles