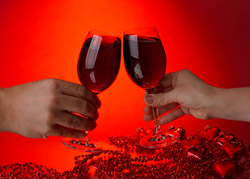 Mr. Sexsmith ponders the implications of giving more than a relationship is ready for as we approach Valentine's Day. Is there such a thing as giving too much too soon?
Personally, I'll probably end up at the Nerd Love event in New York City this year, because as people say “New Year's is drinking for amateurs,” Valentine's Day is dating for amateurs. Kristen and I have an ongoing date night on Fridays, where we try to set aside our week and do something fun together, or have a little mini-New York adventure, or just go out to eat and enjoy each other. It hasn't exactly been romance-central around my apartment this past month (mostly because I have been sick, and then she caught it too, of course), but I think it's important to keep up the small romantic gestures and statements of gratitude.

But still, regardless of whether Valentine's Day is a cheesy version of what you do frequently, or if you see it as a waste because you celebrate your love every day, or if you use it as an excuse to get extra-sappy with your partner or your lovers or your favorite pet. Or if you love it because it reminds you to express your feelings, or if you're single and celebrate it as “single's awareness day,” or if you take part in the feminist V-day campaigns, there's usually some reason to celebrate something on Valentine's Day.

And me, I like the excuse to make grand gestures of care and affection and adoration. I like giving gifts. Probably more than I like receiving them, actually. (Go figure; that aligns quite well with my service top identity. So I'm a gift top too? Ha.) I love it, really. I am one of those overly-observational people who constantly takes mental notes on all sorts of conversations with all sorts of people, and I keep lists in my notebook. Sometimes I go overboard, especially when I can afford it and when I'm inspired, but usually I try to keep it within what the relationship can hold.

But in the beginning, it cannot hold many things. It can't necessarily hold grand gestures. It isn't strong enough, even if the two individuals are incredibly strong (and in love, and committed, and certain of the longevity of the relationship—all of that). The relationship itself needs time to grow before it can receive big things. So big gifts—whatever that might be in your love language, be it monetary gifts, acts of service, quality time, physical touch, or words of affection—might actually be too much for the relationship to handle, and it will sag and bend or break under the pressure of a gift that it cannot hold. Make sense? This is why declaring undying love or buying diamond rings too early on in a relationship can actually cause more damage than good, at least in many cases.

So, though I have a tendency to give big and impressive and well thought-out gifts, I try to also keep it within the scope of the relationship, whatever that might be. I've certainly over-gifted in the past—and under-gifted, for that matter. But now that my relationship with my other girlfriend, Kristen, is pretty steady, and we just hit our two-year mark a few months ago, the grand gestures are pretty welcome as we are settling in to building a domestic life together. The mundane day-to-day has to be offset with at least occasional romantic gestures.

This year, I keep telling people to get online queer porn memberships for their honeys for Valentine’s Day. I think it’s a perfect gift: It will last, for a month or for a year depending on what kind of membership you get; it will lead to some fun and sexy evenings while you’re sorting through all the various kinds of content on the site and figuring out which parts are your favorites and which are your lover’s favorites and where the overlap is; and it’s a great way to start having deeper conversations about things you might want to explore in bed. And what better kind of gift to give on Valentine’s Day than something which enhances and infuses passion into your sex life?

Isn’t that what most of the romantic gestures are for, anyway: To get laid?

If you want to go the traditional romantic route, there are always some classics that are effective: flowers, lingerie, chocolates, jewelry. And for the masculine types, I have some suggestions too—I frequently get asked for advice for what to give someone on the dapper side of the gender galaxy. I suggest belt buckles, ties, tie bars, cuff links, monogrammed handkerchiefs, a set of appropriately colored hankies for your particular kink (look up the Hanky Code if you need to), collar stays with secret romantic messages ... And us boys like flowers too, you know. Something with just a little touch of “I love you,” or “I know you and I know what you like,” will go a long way.

I always turn to Etsy for inspiration for this. It’s so easy: Does your honey like bicycles, and wear belts? Look up bicycle belt buckles. Or bicycle cuff links, or recycled bicycle tubes that are remade into belts or suspenders or all sorts of useful, cool things. You can often find really gorgeous hand-made items for less than $20, and if you have enough forethought, they’ll arrive in plenty of time before the holiday.

I used to be more into celebrating “Single’s Awareness Day” or whatever else on Valentine’s Day, but as I get older I appreciate romantic gestures more and more, and I like the excuses to celebrate love and romance and infuse relationships with a jolt of passion and fire.

Whatever you’re going to do this Valentine’s Day, I hope it’s a good one, I hope you find some good ways to express love to the special people in your life, and I hope you get the kind of lovin’ you most want in return.
Tags:
Views: 1805
Related articles