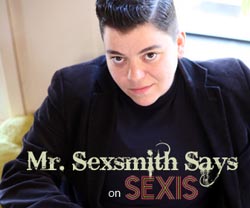 Stepping out into the world of dating at the age of 18 is scary enough without adding the worry that your kinks will make people think you're a freak. Mr. Sexsmith offers some sage advice on coming to terms with who you are and building up the courage to step off the dating curb.

I feel very comfortable with being a lesbian, but I'm still really shy and unconfident about being submissive and interested in kink. I'm basically terrified that every woman that I date is going to think that I'm crazy, or be unable to top me because it goes against their general morals. I'm sure I'll feel better about this once I get older (I'm 18 and still haven't dated any girls), but for now it would be really great to be able to come into this identity without feeling guilty about what this means for me as a feminist that preaches nonviolence against women, yet wants to be spanked in the bedroom.

Meanwhile, though, here’s some ideas to start chewing on.

You gotta start chipping away at that internalized guilt about the supposed “conflict” between being spanked (or receiving any kind of physical sensation in the bedroom) and feminist theories of nonviolence. BDSM, kink, and sensation play are not violence. Violence is defined as “Behavior involving physical force intended to hurt, damage, or kill someone or something,” and while yes, sensation play is done to cause pain, it is not done with the intention of hurting or damaging someone. In fact, the intention is the opposite: it comes from loving care, from consensual exploration. Okay, maybe it doesn’t always come from loving care, but in an ideal world I believe it would.

— Negotiation occurs before an SM scene to determine what will and will not happen in that scene. In a violent act, one person determines what will happen.

The people you date may or may not judge you for being submissive and kinky in the bedroom, that’s true — I won’t pretend no one will judge you. Dating is hard, and putting yourself out there with your desires is a vulnerable position. But remember: vulnerability comes from strength, not weakness. It takes strength to put yourself out there honestly. It is a risk to show your true colors because you could be laughed at or dismissed or called crazy. But the rewards are massive: You may find someone with whom you could play. 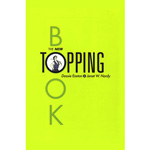 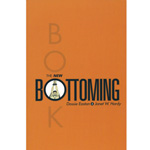 There are many, many skilled tops out there who would love to take you down, show you the ropes, and explore with you as you’re continuing to discover what it is you like and what really works for you.

I hope that helps begin to undo some of the terror you’re feeling. Part of why it is terrifying to reconcile being a feminist and being a kinky bottom is because there is a real stigma in lesbian worlds against kink and against giving up power as a submissive, particularly because there is a lot of second-wave feminist theories that our communities are based around, like the idea that we must always be equal and never above or below each other in the bedroom. But there are also many, many communities which will help you explore the submission and the bottoming, and there is much room for overlap, and there are a lot of people inside the lesbian and queer worlds who have done a lot of this work already.

All kinks, all fetishes, are born from conflict — it is rare to have fetishized a scenario which is completely, one hundred percent all good (or one hundred percent all bad). I know for example one of the reasons I have a gender fetish is because I spend so much of my time studying gender, experiencing the ways that my own non-normative gender gets marginalized and devalued in this culture, and listening and working with other people’s gender pinprick moments; moments which aren’t sledgehammers of wrongness but little pricks of violence and anger. It works for me — one of them feeds the other.

• Listen to the Savage Love Podcast. Sure, there are many problematic things about what Dan Savage says (he can be transphobic, fatphobic, and sexist, for example), but he has incredibly good advice about getting what you want in bed and being unapologetic about your fetishes and kinks.

• Read The Topping Book and The Bottoming Book by Easton & Hardy. Much of my own philosophies about topping and bottoming come from these books and they’re brilliant, clear, easy to read, and spot on.

Keep working on that “I’m basically terrified” thing. You don’t have to be terrified. There’s a huge world of people out there who love playing with sensation, power, and intensity in the bedroom, and there’s someone for you.
Tags:
Views: 3947
Related articles