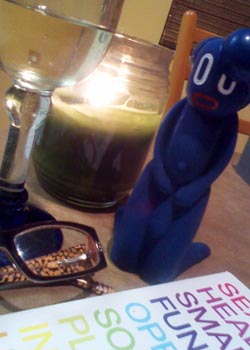 She sends me an animated laughing emoticon.

Granted, I’m chuckling, too, but journalism is journalism. (Somewhere, my favorite and almost-certainly-dead professor is rolling his empty eye sockets at me; I can practically hear him. “You were supposed to be Carl Bernstein, not Al Goldstein, schmuck.”) Jim O. is sort of cute in a Mr. Bill-meets-R. Crumb kind of way; an unassuming little guy with a 70s game-show host hairdo and a bouncy, decidedly feminine badonk and a pretty impressive if scaled-to-size dong, but he doesn’t look particularly insertion friendly to be honest. He’s kitschy. He’s pop-arty. But he’s also phthalate-free and comes in a box with a lube sample, so the question really should be answered. I press on.

“Seriously, are people going to put this thing in their ass…?” I think for a second, realizing my vagueness, and continue typing: “What I mean is: yes, of course they will – but are they SUPPOSED to?”
More LOLing. Business meeting time of death: 4:57 p.m. Just in time for happy hour. But still, the question lingers.

Jim O. comes in colors – lots of them. Aesthetically, I liked the brown one best; it is the only model with contrasting black hair (the rest are monochromatic save those SNL-reminiscent “Oh, noooooo!” facial features). Alas, they really mean it when they say supplies are limited. I ended up with my second choice: dark blue. I contemplated him by candlelight with some wine in an artisan-crafted glass. And as I perused Hoppek’s website and a multitude of works all at once whimsical and controversial, Jim O. and I bonded.

The German-born Hoppek was hatched as a graffiti artist about 20 years ago, but his work has evolved over time and travels to include painting, sculpture, photography, video and installation art. His signature, according to all the information available (and discerned by my own perusal of his various projects) appears to be the oval shape, often in threes, which I have come to know as my Jim O.’s endearing expression of perpetual surprise. I have taken to calling him Herr Blau as a nod to his father’s ancestral roots. And because saying things in German tends to amuse me.

Hoppek’s works, though often cartoonish, have been considered controversial – even racist. Many depict explicit sex acts and exaggerated renderings of genitalia. To be honest, the first time I saw what is called “the Obama beach ball” on Hoppek’s own site – a shiny, black-plastic inflatable with that same little Jim O. face on it – I, too, was taken aback by minstrelesque properties I failed to connect to the wondrous and vaguely smiling expression on the Jim O.

His collection of “bimbos,” handmade rag dolls of sorts, has a few stunners among them, as well. Several have helped Hoppek achieve a considerable level of fame via their animated presence in some popular European commercials for the Opel Corsa; you might find them reminiscent of the Kia Sorrento ads here in the States, where “Yo Gabba Gabba’s” own Muno goes on a Las Vegas joyride with a few of his plaything pals. (Unlike Jim O., Muno conjures an immediate and reassuring safe-for-insertion aesthetic.)

The “Michael Jackson” bimbos, for instance, get progressively lighter in shade depending on model year. And truly, what edgy German’s art collection would be complete without at least a smidge of Hitler? Hoppek’s “Adolf,” is available in both original and negative, a reverse-color dolly, each complete with a swastika-emblazoned SS armband. In the product description, Hoppek calls it, “soft and cute … the perfect cuddly toy,” He also admits it wasn’t one of his best ideas.

I will not condemn Hoppek for any of it. At this point, I’m smitten with Herr Blau. And besides, art is not merely a vehicle by which you’re meant to retreat to the comfort of the womb in the form of vacuous, giant-eyed kittens that evoke the aroma of your Gram’s toll-house cookies. Some of it should make you think. And if art is to be any kind of expression of the human experience, those thoughts should probably be ugly as often as beautiful, if not more so.

Also, some of it should definitely be painted on velvet. 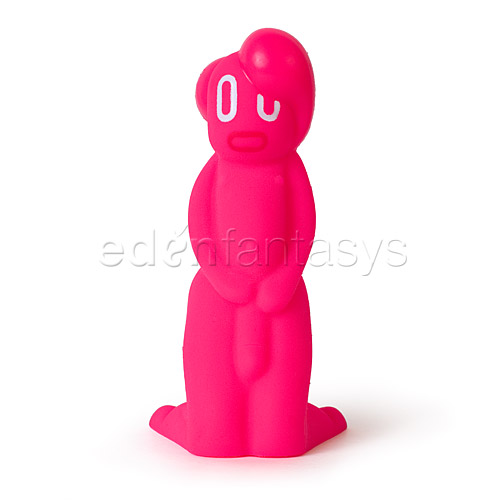 Get your own limited edition Jim O. on EdenFantasys.com

“I am staggeringly intrigued.”

I pose the question again, this time in discussion with Emilie Rosanvallon, Fun Factory’s communications manager, who also informs me that James Brown was likely the artist’s inspiration for the look of the piece. “You could play with the head for sure,” she says of Jim, “but really, while it’s made of the same body-safe silicone as our sex vibes, it’s not optimally functional. It’s more of a collectible.”

And so, I have my answer.

Jim O. is art imitating life (and apparently, the late, great Godfather of Soul). I am almost relieved. I’m no prude, but I don’t want anyone subjecting Jim to the love that dare not speak its name. I have become somewhat protective of his wide-eyed little face. I imagine the muffled Mr. Bill lament, perhaps in German, as his head disappears. “Ooooh, neeeeeiiiiin!” It’s too disturbing to think about, to be honest.