Pornography in the UK!!

Have you heard of JoyBear Pictures, the self-described “definitive raunchy film production company for her and him?”

Well, if you’re from the US and a consumer of adult content, the answer is likely “No.”
UK-based JoyBear Pictures has been around since 2003; however, because of international distribution deals, only two of their films “Street Heat” and “The London Sex Project” are available in the US. And only since last year!

“It ticks all the right boxes for girl-powered filth.” — Forum

I gotta tell ya — cultural differences and market variability aside, I found these fully charmed bits of press to be pret-ty interesting…

Justin was minding his own business, fresh out of college and working in a mainstream sales position in the early 2000s, when a friend pointed him towards a Playboy-sponsored, reality-TV show contest. In it, contestants were given £8,000 (roughly $13,000) to make their own adult film in an apprentice environment. On a semi-whim, Justin, who had studied film and photography as an undergraduate, decided to give it a go. He won, and JoyBear Pictures was born.

Justin tells the story of his transition from “civilian” to “pornographer” :
Not one to fall victim to the contestant curse that plagues most reality show “winners,” Justin parlayed his winnings and dove headlong into adult production. His company has been growing steadily, but slowly, ever since. Currently JoyBear consists of Justin, three additional full-time employees and a collection of regular contract crew workers — a “small, but formidable” team.

Justin seems very committed to maintaining this steady-yet-slow process. This includes consciously refraining from producing too many films too quickly. His philosophy of “sell the films you’ve made,” rather than keeping to a production schedule that may contribute to an overabundance of product, seems to have worked well so far — JoyBear has only produced a handful of titles, but those wares are in consistently high-demand. 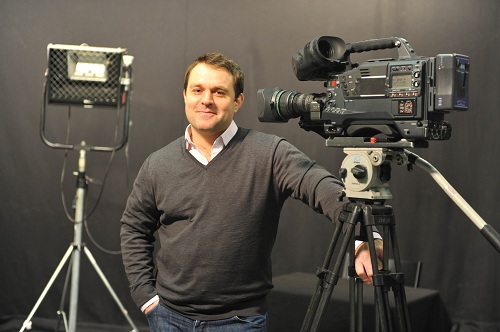 According to Justin, the UK market was predominately driven by DVD sales when JoyBear first came on the scene. And although much lip service has been paid to the specter of web-based platforms, online consumption has not replaced DVD sales in his experience. Consequently, JoyBear has placed less emphasis on its online presence in lieu of developing international markets and distribution. This is why we US consumers have access to the afore mentioned films, “Street Heat” and “The London Sex Project.”

Justin talks about JoyBear’s structure and growth:
As I mentioned, JoyBear films are described repeatedly as being “girl-porn,” which I take to mean women* focused and friendly. But what specifically constitutes this sort of content?

It also involves a certain amount of instinct.

Regarding marketing, casting, and even production decisions, I get the impression that Justin often goes with his gut, a tactic that has been resonating positively with women in the UK since he made his very first adult film:

Justin is not content to let JoyBear rest comfortably on its laurels though, and he is constantly looking for ways to improve his products by seeking feedback from consumers. And he occasionally gets some surprising results!!

Case in point: he recently surveyed JoyBear customers about “bi-curious” content featuring men* performers. How did people feel about it? Specifically, how would people feel about it being included on the JoyBear site? He found that 70% of respondents were either indifferent about or in favor of seeing gay content on JoyBear.com.

Surprising results? I thought so, given JoyBear’s bread-and-butter offerings… but that’s why Justin runs a successful production company, and I just conduct the interviews!!

So although JoyBear has no plans to move into gay content production, they do have plans to add a discreet “Gay Curious?” button to their main navigation bar in the near future…

Who would have thought a reality TV show “winner” would make good on his commitment to create something new?

* The author purposely uses “men” and “women” in lieu of “male” or “female” (respectively) in order to refrain from conflating gender and sex. Please direct any questions about this decision to Dr. Chauntelle.
Tags:
Views: 1663

Dr. Chauntelle holds a PhD in sociology and blogs at PVVOnline.com - visit her there for more porn-edification!!