Beyond Bromance – Women Getting Off to Guys Getting it On 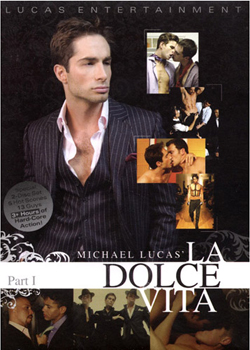 It's said that men like nothing more than to watch two women going at it. So what about the reverse: women getting off on watching two guys getting it on?

Bromance. It’s so hot these days. Just look at classics like Butch Cassidy and the Sundance Kid or recent hits like Pineapple Express. Films love to focus on intense friendship between guys.

All that male bonding is nice, but when it comes down to it, I prefer seeing that bond taken just a little further. (Please, hold the Brokeback Mountain jokes.)

Once in a while my preference slips out in conversation. “Personally, I’d rather see Hugh Jackman make out with Brad Pitt.”

Still with me? Don’t worry, I’m used to the looks, the awkward pauses.

Prime time television can run promos for Desperate Housewives with a hint that Terri Hatcher might kiss one of her costars—but if you let it slip that you’re a woman who finds gay male sex and romance arousing, eyebrows are raised. They’re raised high.

The thing is, some—dare I say many—straight women and lesbians find gay men attractive. And we’re not talking, “Oh that token gay friend in that popular romantic comedy is a cutie.” We’re talking shirts off, pants down, dicks out, and the kind of make-out sessions that leave bruises.

(What kind of reputation do I have anyway?)

I brought a like-minded friend for moral support and we showed up to find more than twenty young women assembled in a small apartment in front of a huge television set. Everyone looked a little nervous, fingers clasped around the stems of wine glasses or the tassels of the cushions spread out across the floor.

Christina, the hostess, opened a rental DVD and popped it in the player. I never caught the title, but it was a hardcore European flick. The actors were in their late-twenties, built like soccer players, and all inexplicably clad in white socks.

Then, as the action onscreen became more intense, the room grew silent.

I sensed a current of arousal. It was a little unsettling to find myself in a room full of girls I didn’t know very well—each of them riveted by a hardcore male sex scene. Then I realized I had finally found my people. And my people were everyday college students.

After that happy incident, I made it my personal mission to drop my filter when talking to other women about sexual likes and dislikes—specifically liking or disliking dude on dude action.

Not every woman I spoke to agreed, but more often than not, women seemed pleasantly surprised that someone else felt the same way. Conversations often turned to how unfair it seemed that men were practically required to lust after lesbians.

Just last month I attended a book club meeting with a group of mothers. We discussed Twilight. (I know. I’m ashamed.) When it was my turn to bring up a discussion topic, I took a gulp of red wine and blurted out, “Don’t you think it’s a little homoerotic that this hot young doctor vampire guy chose a hot young man for a companion first? There’s nothing familial about their relationship to me. It’s just hot.”

My cheeks burned as I waited for responses. While a few of the women immediately cringed, another sat up straight. “Holy shit,” she exclaimed. “You’re right.”

They all eyed me, so I went on. “It’s actually pretty common for women to be aroused by homoerotic themes in literature and film.” (Okay so I had my filter up at half-mast.)

“Interview with the Vampire was hot,” one of the ladies volunteered.

“I like Queer Eye for the Straight Guy,” said another. (I’m not counting Queer Eye unless I missed the very special episode where Carson goes all Bend Over Boyfriend on a hot fireman.)

Confused? Me too. When it comes down to it, arousal is a very personal thing.

If you think I sound like a frat guy salivating over two blond co-eds about to make out next to the keg, you’re probably right. You’re not going to see my version of that scene on the front page of Digg, but the foundation is basically the same. Taboo. Beautiful. Unnatural. Natural. Shocking. Sexy. The sort of train wreck that gives you a boner.

There’s no one definitive way to enjoy or explore this kink. Maybe you’ll find subtle homoeroticism in mainstream film titillating and exciting. Maybe you enjoy hitting the local all male revue. Or maybe you’ll subscribe to a hardcore gay website.

And remember, not every woman finds gay male action attractive. You’re not weird or judgmental if it’s simply not your thing. A quick and informal “Gay dudes, hot?” poll amongst my acquaintances recently got responses like, “No. No to the 100th power.” Unenthusiastic responses aren’t discouraging. Like any kink, a huge part of the excitement is being different, enjoying something special that makes your individual sexuality unique.

Just know that if the subject matter resonates with you, you’re not alone.
Tags:
Views: 2367
Related articles

Other articles by Mrs Melee