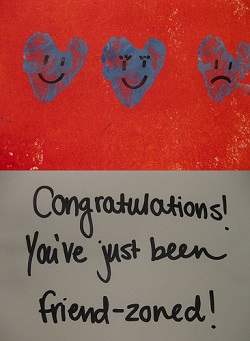 http://www.flickr.com/photos/cali4beach/
You know how it goes. Man meets woman, man befriends woman, man expects that friendship to blossom into something sexual, and when it doesn't, man complains that he's been friend-zoned. This scenario can play out between any two people, regardless of gender...but it seems that man versus woman is most common, and in each situation, it seems to be the same complaint: "I was so nice to her. She led me on." But how often do we really hear her side of the story?

— Millions of "nice guys" all over the world

The concept of friend-zoning is very gendered and very misogynistic in nature. It operates on the assumption that if you treat a woman well, she owes you sex, when in reality, no one owes you sex, regardless of what you do for them. It creates a situation where sex becomes currency, rather than a choice that two people make out of mutual desire and comfort, and when these sorts of pressures are introduced into a friendship, that friendship tends to dissolve. Rather than focusing on the pain of the rejected, we ought to think of what caused that rejection in the first place...and the emotional toll it takes on someone when they lose a person who they believed to genuinely value them as a friend, as opposed to a potential lay.

But, I have a confession to make. I am a hardened friend-zoner. If you ask any of my "victims," they'll tell you I am one of those wretched women that dates the jerks and leaves the nice guys in the dust. But is that really what happens when someone is friend-zoned?

The first guy I friend-zoned was one of my closest buddies back in high school. We really clicked right off the bat. We'd drive around in his parents' car, chow down on fast food, and laugh until we felt sick. We would spend weekends playing video games and lighting off fireworks in his backyard, and we had lots of mutual friends, so even when we didn't have plans to hang out, it just kind of panned out that way. I still look back on our goofy antics with a smile...but it took only one night, and one remark, for everything to change.

It was after a particularly long movie marathon and most of our friends had filtered out of the house. Only the two of us were left, sleepily sprawled across the couches in his living room. The other handful of times this had happened, I (and whoever else was "left over" after the festivities) would just curl up with a pillow and head home in the morning. This time, though, was different. There were no other people "left over," and I was, for lack of a better word, stranded.

This had never been an issue before. I figured I'd just fall asleep as usual, but then he placed his hand on my thigh. "We should go sleep in my room," he said.

I was so tired that I could barely keep my eyes open, and as anyone who's been low on sleep can attest, the idea of sinking into a bed is just about irresistible when you've gotten to that point. I'd fallen asleep in there before, and it was no big deal - he shared a room with his younger brother. I climbed in so that we were lying head to foot and dozed off.

After I got home the next day, he suddenly stopped talking to me. Stopped answering my phone calls, would roll his eyes when I tried to talk to him in the halls or get his attention at the lunch table. I was left wondering what I did wrong. What did I do? What happened to my buddy?

A few weeks later, I overheard him talking to some of our other friends: "Why did she even do all that stuff with me if she wasn't interested? I tried to make a move and she rejected me. I don't know what her problem was. I was so nice to her."

Our entire friendship had been built around his desire to get into my pants, and I had no idea. It took over a year for me to find out, and even then, it was through his complaints to mutual friends rather than something he said to my face. When he had suggested that we lie down, that was it - that was all he'd said. If he meant to suggest some other activity, he did a very poor job of it. This was the first time that anything like that had happened to me. I thought I had found the best of friends in him, but he was only taking me out because he secretly wanted to bone me, and somehow, that was what he considered to be "nice" behavior.

Does that sound nice to you?

Foz Meadows, in "The Creepiness Question," writes:
"[W]hen I was twelve or thirteen, a boy at my high school developed a crush on me. He asked me out; I said no. He asked me out again; I still said no. One would think that my feelings had been made abundantly clear by this point, but apparently not: his next step was to follow me around every lunch and recess for over a week declaring that he loved me. During this time, I told him repeatedly to fuck off, go away, I didn’t like him, he was making me uncomfortable; on multiple occasions when he came too close, I even resorted to physically shoving him back. When that still didn’t work, I started running away, literally running, right to the other side of the campus if need be; he wasn’t fast enough to follow in the moment, so he started sending messengers after me, other boys who, amused by the absurdity of the situation, thought it was great fun to track me down, wherever I was, and tell me that this boy loved me, and wouldn’t I come and speak to him, go out with him? So then I had to hide from them, too: the only place I was safe was the girl’s toilets, where they were forbidden to go."

Perhaps these sorts of shenanigans are permissible in your teenage years, when you're still figuring yourself (and your friends, and the rest of the world) out, trying desperately to make all the pieces fit in just the way you want them. Perhaps. But this is only one example, and this kind of thing happens well into adulthood for many women. I asked every woman I know, and while that's not exactly a professional study, I think it's telling that each and every one of them could recount at least one story of a time when they thought they had made a friend and he turned out to have had ulterior motives the entire time. That doesn't sound "nice" - it sounds predatory.

Women have been painted as cold-hearted witches who "only date jerks" seemingly since the dawn of time. These sob stories are always the same: He met her. He thought she was great. He went shopping with her, was her shoulder to cry on, spent long nights talking to her, and when he finally mustered up the courage to confess his love for her, he was rejected. Often, we commiserate. Oh, how cruel she must have been. So very, very cruel. How couldn't she see how lucky she was to have a guy like him in her life?

And therein lies the problem. She probably did see that. She valued him as a friend. Is it really so much more believable that she knew his intentions all along and used him like some sort of she-devil than it is for her to have been taken aback by one of her close friends spontaneously proclaiming their love for her?

It hurts to find out that you meant nothing more to someone than a potential lay, and to lose a friend you adore, because that "friend" was only talking to you in the hopes that you'd let him in your pants. For me, for countless women, the pain of losing people I had bonded so closely with was much worse than the pain of spurned advances.

It can be heartbreaking to genuinely fall in love with your friend and learn that love will never be returned in quite the way you wanted. Of course it can. But if you are a genuinely good person, that friendship ought to be enough. If it isn't, then perhaps you aren't as nice as you claim.

Friendship should not be a source of resentment.

It's time we address the entitlement exemplified in the complaints of the "friend-zoned" and start regarding friendship in its original, positive light, as something to be revered, cherished, and treasured...