Do Men Fake It Too? 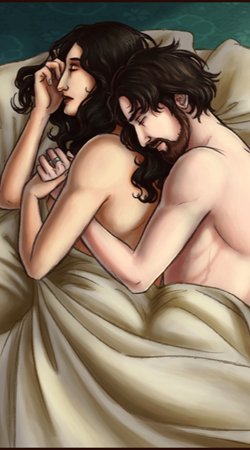 http://temiel.deviantart.com/
When I think of faking orgasms I think of Meg Ryan in "When Harry Met Sally," not a man faking it.

""You can fake an orgasm, but you can't fake laughter.""

We all know that some of us women fake it in bed. There are many different reasons for this, but did you know that men fake it a lot too. I never really thought of this, nor have I run into this problem if that is what you want to call it.

Some might think it is impossible for this to happen, me being one of them. I know exactly when my husband lets go, not only can I feel it, but he makes the same cute face when it happens. He has become aware of this and when he lets go he tries not to make that face but it comes out in the end.

A lot of women fake orgasms to protect their partner. They don’t want to hurt their feelings because they didn’t get off. Some women also do it because they think that they can’t have one, since they have never experienced one before. So this got me thinking, what possibly might be the reason for a man to do this?

One reason that keeps coming up to me is that, they just want to get it over with. They just might not be into it that time. Yes it does seem hard to believe, but some men say they do it just because we want it. They say to keep you happy they will give it up even when they don’t want it. My husband wants it all the time so I know it is hard to believe this one, but I guess there are guys out there that don’t want sex all the time.

Some men fake orgasms to hide the fact that they have a problem with premature ejaculation. This could really wreak havoc on a man’s libido, and to avoid the embarrassment of having to talk about it they fake it. I think that this is a sensitive situation and you need to be careful when talking to them about it. If not done with the sensitivity they need, it could turn into a really bad situation in your relationship. Some men could resent you for even bring up the subject.

Alcohol can be another factor in his faking an orgasm. If he is too drunk, he may not be able to finish let alone keep it up. So instead of just stopping in the act he fakes it. Sometimes too if that last shot just so happens to kick in during sex this could wreak havoc on his man hood too.

Sometimes a guy spends so much time and energy seducing a woman. When he actually gets what he wants, the reality is so much less than the fantasy he has been wanting. So instead of continuing the act he fakes it to get out of it.

He could also fake it due to the fact that he is bored. Yes, I said bored. Doing it the same way all the time can get boring. You have to liven it up a bit. Try new things; get out of the rut before it is too late.

If you do find your man faking, there could be so many reasons. Just remember it may have nothing to do with you so don’t hold it against yourself. I am no expert at sex or anything and I don’t claim to be. I just found it amazing that there are actually guys out there that can fake it. I hope you have enjoyed reading my article, have a great day!
Tags:
Views: 1908

LostinLife
I am a mother of three just trying to find where I belong in this place we call life. This site has helped me make new friends and really get to know what I like. I love to explore and try new things.

If there is anything else you would like to know just ask.