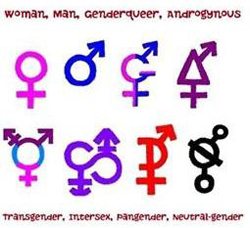 I'm married to a man...and a woman. No, I'm not a member of a religion that believes in multiple marriages. Nor am I in a polyamorous relationship. My spouse is bigender, both male and female in one body.

"Male and female represent the two sides of the great radical dualism. But in fact they are perpetually passing into one another. Fluid hardens to solid, solid rushes to fluid. There is no wholly masculine man, no purely feminine woman."

My husband, and I do use this term to illustrate the male persona, is completely straight - he likes women. Not only is he straight, but he's very straight-laced. En femme, or girl mode as we call it, she is straight as well, as in she likes men, but has a singular attraction for me. Confused yet? I was at first too.

Like many people, I assumed plumbing dictates orientation. It doesn't. Sexual attraction and gender identity are both concepts of the mind. As hard as it can be for people who are at ease in the physical gender they are born with to understand, you aren't male or female because of what's between your legs. You are male, female, or whatever gender you are because of your brain. If the two match up, consider yourself lucky.

I get THAT question way too often. If you're in a relationship with someone who is non-binary gendered, or whose gender identity doesn't match up with their physical gender, and they're open about it, you probably know the question I'm referring to. For those of you that have no clue what I'm talking about, it goes something like this:

That last one is likely to get you punched in the face. Twice.

Considering how few people know, the fact that I've heard these questions and their many variations multiple times is astounding. Of course, some of it has been from complete strangers who feel the need to walk up and be rude, but I've also heard these things from friends and family. The problem isn't really that you're curious, but the accusatory, narrow-mindedness behind the question or the form of the question itself.

Assuming it's a complete stranger, realize that what you are asking equates to walking up to a random person and asking them their favorite sex positions and what toys they like to use and whether or not they like having their hair pulled when they're doing it doggie style. Would you really answer a complete stranger? I wouldn't. For all others, a good rule of thumb to remember is if you'd be uncomfortable talking to that person about private things, they're probably feeling the same way about you. If you absolutely MUST talk about it, and you aren't super close, trying asking if you can ask first.

If you open your mouth to say "How can you stand --?", "Doesn't that gross you out?", or "How can you love that?", just shut your mouth and go put on a pair of blinders. You need them because, obviously, you aren't capable of functioning in the world at large. Yes, that's callous and bitchy and probably rude, but it's also true. If looking at a male body in a dress or a female body with a bulge in the front of their pants bothers you, don't be rude or nasty, don't act all holier than thou, just look away and pretend you never saw it. It'll save all of us a lot of time and trouble.

If your instinct is to say "How do you do it?" or "How do you live with --?", stop for a second and figure out what you're asking. If you're thinking "How do you stand that?" or one of the other questions, then see above. Otherwise, express curiosity, not accusation. "What's it like to live with someone whose gender identity doesn't match up with their physical gender," is a good opening question. You still may get a curt answer, but these things are pretty private for most people, so expect some resistance if it isn't a close friend or family member.

The problem isn't that we aren't willing to discuss it. The problem is all the narrow-minded bigots who like to act like we're dirty, hell-bound whores start their rants in that exact same way. If you really want answers, there are many communities online that will answer questions openly, partially because they want to educate and partially because the anonymity makes it easier to be open and honest with no fear of repercussion.

My day to day life is ordinary. I'm married, I have kids, a home, a ferret, and a job. I cook, we clean, we take the kids to the fair or the zoo or the park, I do the grocery shopping because he loathes it, we clothes shop together, he fixes the house stuff, I fix the computers, we both have jobs. Your life is probably pretty similar to mine, except that my husband has 2 dressers and one of them is filled with adorable skirts, silky dresses, and tops with lace and frills. My husband is a very cutesy girl.

For me, a bigender spouse is the best of both worlds. Being pansexual, I'm blind to gender identity where attraction is concerned. I don't care what plumbing exists on a person I'm attracted to; I just care about the person. So, for me, it's great. I have a husband who is strong and good with his hands, a man who is witty and comical, a man who loves me and our family with all his heart, but I also have a wife - a woman who is sweet and submissive, a best friend for girl talk, a woman who loves to shop possibly more than I do, a woman who loves me in ways I cannot begin to describe even though I wasn't born with the parts she craves.

Is this for everyone? No, it's not. For one, you have to be comfortable, or learn to be comfortable, with things many consider abnormal. I learned to enjoy being the "boy" in bed. Two, you cannot take hate to heart, and you cannot give others' opinions weight in your life. People tend to criticize and demean what they do not understand. They will drag you down and make you miserable if you let them. Three, you have to commit to this life - it doesn't work if you just accept it, you have to embrace it. You cannot just love them in spite of it, you must love them for it, because it is as much a part of them as the color of their eyes or the way they play footsie under the covers or the way they look at you from across the room and you know they're thinking things that shouldn't be said in public.

It isn't the easiest lifestyle - it comes with its own set of problems (and double the clothes bill!), but it's really no more work to have a solid, happy marriage with a bigender spouse than it is to have one with a straight opposite gender spouse.
Tags:
Views: 2937
Related articles

Jesyra
I'm a writer with a science degree, currently working as the Lead Quest Designer for an upcoming MMORPG. Writing+Sci-Fi+Game = A dream come true! I'm a gamer, I play everything from computer MMO's to console FPS.

I'm a pansexual woman with a bigendered husband. Ahh, life is good.