What Hollywood Teaches Us about Being a Daddy 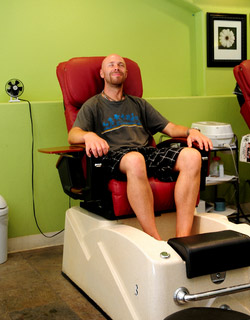 Or, how to successfully combine parenting, fatherhood, and sex...

I’ve got two daughters, ages two and five, and once they arrived, I encountered three parental shocks that no parenting how-to book warned me adequately about. Just in case you’re a father yourself or might know a father-to-be, here’s what you need to be warned of. (Brace yourself!)

• Shock #1. No matter how carefully you play with them, your kids will ALWAYS manage to kick you in the balls. I mean jackhammer-hard right in the family jewels. Ooof!

• Shock #2. Any day that mommies have to clean up poop, pee, vomit, ear wax, or snot, they have absolutely zero interest in sex. I mean no racy HBO shows, no under-the-covers late-night heavy petting, no dirty talk—nothing!

• Shock #3. Mommies are cleaning up poop, pee, vomit, earwax, or snot just about every day until the kids are six. (And by “six,” I mean “sixteen.”)

So in an effort to bring some zippe-de-doo-dah to my own sex life and still remain a passable father, I turned to the guru of all things. No, not God. Hollywood. TV and movies, specifically. As Americans, we’ve learned to find our role models on screens both great and small. Where the heck else are we supposed to find them?

In no particular order, here are eight fictional fathers who all have fictional daughters. Each dad has his own parenting and love-life secrets (explicit or implicit), and I’ll do my best to convey the finest of those to you. I call this my “Hollywood Fatherhood Master Class for Dummies” (like me):

Example #1—Noah Bennet from Heroes. When he’s trying to hide his secret job as a quadruple-crossing assassin/kidnapper from his wife, he gets his Haitian friend with the magical mind-wiping ability to put the whammy on her. Yes, his daughter Claire hates him for that manipulation (and a host of other questionable behaviors), but way deep super-down in his dark Grinch core, he’s doing it all for her. Or at least that’s what he keeps saying.

Real Fatherhood Advice Quote: “You'd be surprised what a father will do for his daughter.”

Imagined Sex Advice Quote: “If your lover doesn’t remember what you did to them the night before, it doesn’t count.”

Bonus Real Sex Advice Quote: “You know how this works: the less you know, the better.”


Example #3—Al Bundy from Married with Children. Yes, here’s the master of self-loathing and the poster child of marriage resentment. If you can get past his anger, angst, and attitude, he’s Yoda-wise in his own bumbling way. Plus his IQ 70 daughter is Christina Applegate. Not too shabby!

Real Fatherhood Advice Quote: “This is my week off, so pack up, get the kids, and I'll see you in a week.”


Example #4—Danny Tanner from Full House. If you’re into Martha Stewart-style clean freaks who seem so warm and caring that they’re probably all mushy inside like a microwaved brownie, he’s your daddy! He’s the guy grandmas want their grandkids to bring home. Like a slobbery puppy. Safe, relatively clean, and completely harmless.

Imagined Sex Advice Quote:“How about a nice game of Scrabble instead?”


Example #5—Robbie Stewart from Hannah Montana. This one’s weird because Robbie is played by Billy Ray Cyrus, who is Miley Cyrus’s (who plays Hannah) real dad. In the show, he’s a country bumpkin and ex-music star. Since his wife died three years ago, he’s focused everything on making his daughter happy. Awwwwwww. Gotta love those self-sacrificing types.

Real Fatherhood Advice Quote: “It’s a lot cooler when the Jonas Brothers do it.” (Okay, okay—maybe this one is sex advice instead. Thanks to The Cougar TV show, we’re all starting to wonder if it’s only teenage girls who are drooling for teen idols.)


Example #6—(And speaking of Showtime. . .) Tony Soprano from The Sopranos. Here’s a man who has his cake and eats it too. Yeah, his kids aren’t too fond of him and his wife comes to detest him, too, but lordy, he gets a lot of sex despite being irritable, overweight, and psychologically unstable. High marks for being the boss of the DiMeo crime family and still trying to be a father.

Real Fatherhood Advice Quote: “Even a broken clock is right twice a day.”

Bonus Real Sex Advice Quote: ““What use is an unloaded gun?”

Real Fatherhood Advice Quote: “This was the moment I’d been dreading for the past six months. Well, actually for the past 22 years.”


Example #8—Darth Vader from Star Wars. For about a million years (the time it took George Lucas to get out Episode I after the original 1977 film), we all thought Darth Vader was some kind of evil robot-man. Then we find out he once loved a woman (Natalie Portman, no less!) with cosmic passion best reserved for Harlequin romances with Fabio on the cover. But like so many good romances, once the kids came around, it all went in the crapper, he was on his own, worlds got destroyed, the kids came to hate him, etc. Sigh.

Real Fatherhood Advice Quote: “You are unwise to lower your defenses!”

Real Sex Advice Quote: “You don’t know the power of the dark side!”

Bonus Sex Advice Quote: “What is thy bidding, my master?”


Okay, okay, maybe Hollywood doesn’t have all (or even any) of the answers. But here’s the frightening truth—we real dads don’t either. We muddle our way through the caffeine-laced haze of days and try not to traumatize our kids by having them walk in during that once-a-month quickie where Daddy’s got Mommy bent over the laundry hamper as he hollers “Slamma jamma ding dong!” There’s no price tag on them, but kids come at a cost, and it’s more or less then same for everyone.

Your sanity. Your sleep. Your sex life.

But you can fight back. No, the sanity’s disintegrated. The lazy-morning ZZzzzzzs, too, most likely. And the kids really will kick you in the balls. Often. But the sex? That’s the one I might be able to help with by sharing a simple three-part strategy I’ve been working on for, well, five years. I’m not guaranteeing against bouts of blue ball or weeks where you want to rip your (and maybe your wife’s) hair out by the fistful, but for now, this is the best I’ve come up with. Give it a chance. (Add alcohol, de-thorned roses, and Viagra as needed.)

1) A (better) lock on your bedroom door.
2) A knee-high stack of Disney DVDs. (No, not to get kinky with while watching them, but to keep the kiddies occupied. Unless you’ve got a thing for Belle or The Beast. Or even Pinocchio.)
3) Lubricant. Foreplay is a thing of the past.

And if that’s not enough to make a difference, take your cue from Al Bundy: “If you need me, I’ll be at the nudie bar.”
Tags:
Views: 1378
Related articles