Just Looking 101: How to Scope Out Guys without Being Creepy or Getting Caught 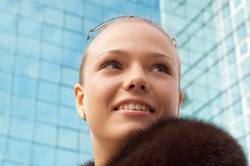 Guys love it when people look. It’s the kind of shock and awe that leaves us riding high on dopamine and suddenly increased self-worth, even if secretly so. But let’s be honest. In a very practical sense, there’s clearly a right way and wrong to way to scope out guys. The right way is flirty and fun. The wrong way? Well, it might just necessitate a visit from Nancy Grace.

The Basics of Just Looking

Here’s the thing—guys like it when people look. Let me offer an example via the saccharine-sweet movie Notting Hill, where Bernie (a loser pal) dreamily says to Hugh Grant’s foppish character, “Well, you know, anybody saying they want to go out with you is . . . pretty great . . .isn’t it?” For our purposes, reduce “want to go out with you” to merely “want to just look at you,” and that’s the kind of shock and awe that leaves us riding high on dopamine and suddenly increased self-worth, even if secretly so. In a world full of sexy movies, sexy billboards, sexy TV commercials, and sexy ads in magazines, to take the time to check US out vs all of that? It’s terrifically flattering.

But let’s be honest. In a very practical sense, there’s clearly a right way and wrong to way to scope out guys. The right way is flirty and fun. The wrong way? Well, it might just necessitate Nancy Grace. Especially if it involves peepholes, super zoom lenses, or miniature cameras.

So before you rush out to get a good dose of eye candy, let’s consider the following “Just looking!” basics.

1. Guys like being watched. Yes, it’s worth repeating. For oh so many decades, guys were expected to do all the watching, the approaching, the asking, and the begging and pleading. These days when the tables are turned, it’s pretty darn flattering. Of course it’s not all that manly to get completely gah-gah over this unexpected attention, but trust me—if we even suspect that someone is checking us out, we’ll strut like Foghorn Leghorn (the giant Warner Brothers cartoon rooster who loves to sing “De Camptown Races”) and be mightily pleased. So don’t feel bad for doing it.

2. “Just looking” is not only normal, it’s healthy. Even if you’re in a relationship already. While overprotective partners and spouses might catch you from time to time in the middle of a peek, as long it’s truly “just looking” versus considering upgrading your current model, there’s nothing wrong with it. We people-watch for entertainment. We do it out of boredom. We do it out of curiosity. If you’re in a relationship where it’s not allowed to at least give a once-over to someone else who sidles by, you better start looking into articles on co-dependency. If you’re NOT in a relationship? Well, just like those buffalo in that famous song, let your eyes roam.

3. Be subtle. “What’s subtle?” you might ask as you spin your head a full 180º as that “Harrison Ford meets Brad Pitt” lookalike saunters past in True Religion jeans and a sleeveless black Diesel shirt which shows off his He-man biceps. “Subtle” is watching in a way that YOU don’t get noticed back. “Subtle” is using peripheral vision. “Subtle” is the type of thing most teachers do with unfairly sexy students who don’t bother to hide that sexiness. “Unsubtle” is Bill Clinton and Monica Lewinsky, or those cartoon characters whose eyes literally pop out of their head, their tongue rolls out about twenty feet, and they start heating up like they’re a supernova. “Unsubtle” is where it can get creepy, or at least make you look foolishly desperate.

4. Use props. Sure, sunglasses are quite useful. But so are laptop computers, cell phones, and any other electronic device you can pretend to fiddle with while your eyes do the boots to hair once-over.

Where to Just Look

Well, fan-freakin-tastic, right? Now you’ve got most of the basics, but what are you supposed to do with them? Or more to the point, WHERE are you supposed to put these ideas into play? Everybody and their ugly cousins are doing the bar/nightclub/pub scene, so who wants that type of competition? Movie theaters are too dark. Churches are wildly inappropriate. Restaurants aren’t great since patrons go as couples—don’t let a partner catch you gawking at their hot man!

So where does a prospective guy-watcher go for some first-rate peeping? Here are five sure-fire venues to find yourself a hot guy to check out.

1. Universities. Urban campus, small town America, or something in between, there’s some kind of main quad area where guys will linger and pretend to do homework. Whether it has actual grass or not is irrelevant—all it needs is a coffee kiosk and a few wooden benches, which is all that’s needed to attract guys who will congregate with the intention of covertly scoping out babes. Turn the tables by scoping them out at the same time. Wear sunglasses if you feel the need to stare. September’s a perfect time to get a good look at those fresh young things who aren’t yet completely jaded by the drunken hookups and dating messes that are part of the college scene.

Recommendation: With Fall upon us, tight-fitting khakis and tank tops are everywhere (except up North, but there’s nothing wrong with a well-filled-out Brooks Brothers V-neck).

2. Shopping malls. This one’s pretty popular with the tween and teen crowd, but let’s get serious—everyone needs to shop. Spend a few extra moments deciphering the shopping mall map while checking out the guys buying brownies at Mrs. Field’s Cookies. Bend to tie your shoe so you can watch the pair of jocks toss an empty McDonald’s bag between them as they race around the indoor fountain. Nibble a biscotti from a bakery-side table while seeing just which guys blow past Crabtree and Evelyn, Benetton, and J. Crew, and more importantly, which guys stop to window shop.

3. Grocery stores. You’d think that anywhere with a freezer aisle wouldn’t be a hot spot for guy-watching, but you’d be wrong. This is also a good chance to confirm that your eye-candy isn’t having Mommy do all the shopping. You never know when watching will turn into dating, and who needs a Momma’s boy?

4. Airports. This one’s maybe not so secret, but it’s so good that I’m mentioning it anyway. Yes, people at airports are often strange, frazzled, and sleep-deprived, but there’s so much variety that it’s hard to say “no” to this people-watching bonanza.

Recommendation: Bring that laptop and pretend to be doing something important. If you sit in one place long enough, it’ll seem like an entire state’s worth of people will stream past you. Drink it in.

5. Starbucks. Sure, we all pop in for a venti Caffè Misto now and then, but how often do you sit and keep your nose out of work papers or The Wall Street Journal? Sip the coffee and scan the crowd. The people in line are too busy to notice you, as are all the other workaholics needing their caffeine fix. Take advantage of their distraction to see what’s what.

Recommendation: Pick a location that has windows looking outside. People-watch those walking past. If there are some park benches or a busy street corner nearby, you’re golden.


A few final thoughts—take a wingman (or wingwoman) with you, so you can pretend to chat while you both scope out the passerby. And if you’re particularly talented at “just looking” (or even if you need some pointers), consider joining an online group like “I Like to People Watch,” where you can read true personal stories, chat, and get advice from people with a similar interest. Lastly, if you ever lock eyes with the subject of your gaze, either smile and wave like you’re communicating with someone BEHIND them, or just fake an asthma attack. If you’ve got a little chutzpah, though, and you’re single, go ahead and wave them over.