Isolation: It Comes With the Territory 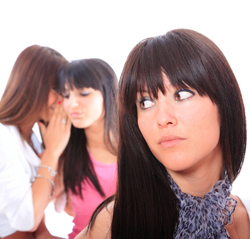 Imagine you’re just meeting someone new. It could be in person at a party, someone you bump into while going about your daily business, on a first date, or it could be on an online dating or social networking site.
We all engage in the cliché small talk that helps us to get to know the other person and ease any awkwardness that hangs in the air. Most of us have no problem with these sorts of encounters and can navigate them with ease. They’re nothing that causes much worry and that we’re often quite comfortable doing. It used to be that way for me, but that has changed.

Whenever speaking to someone new and engaging in these every day conversations with strangers I start to dread a certain question because of how people normally handle my response. “Oh, where do you work?” It seems like an incredibly normal question, but every time I get asked that I cringe. I want to be able to answer that with something of the usual sort that doesn’t cause people to raise an eyebrow and shift the dynamic of the conversation, but it never works out like that. I try to find ways of avoiding that question completely, but it has to come up eventually. “Well, I work in an adult store.”

This completely changes everything in most conversations I have with people I’m just meeting. From that moment on it seems as if people’s opinion of me changes. Some immediately look down on me and question my morals. They see it as a less-than-savory occupation because it’s something revolving around things of a sexual nature and our society has conditioned us to think of sex as a completely negative thing that shouldn’t be talked about, much less talked about openly.

There have been more than a few times I’ve been told that there are people in my circle of acquaintances who make horrible assumptions about the person I am based on this. “You know, she’s that girl who works at a sex shop.”

Those last couple words are usually said with a look and a tone of disgust and disapproval. It’s the same as if this person were saying “You know, that girl who sleeps with everyone she knows.”

On the other hand, sometimes this changes the dynamic of the conversation in a completely different and even more awkward way. When talking to my male peers I often get met with raised eyebrows for other reasons, but stemming from the same assumptions. This makes getting to know people I have an interest in especially difficult.

Sometimes they don’t say anything but I can see the wheels turning in their head and I’m automatically disappointed because this ruins the image they had of me. I see that the interest they have in me has shifted to a much more primal state. I feel they see me as an easy conquest, someone who would sleep with them just because, or someone they don’t have to hide their sexual desires from.

Right then is where all tact and politeness on their end usually get tossed out the window. They begin to tell me details of their sexual exploits and experiences, list their preferences, or generally tell me other things that people wouldn’t ever tell strangers. There have been countless times that they have decided to ask me highly personal questions or make comments on what I do. “I bet you have a lot of toys at home.” “You probably watch a lot of porn.” “What’s your favorite?” “If you’re looking for anyone to help you try things out I’d love to.” Even though I talk about sex constantly at work, it’s not something I feel comfortable discussing with anyone in a personal context and it’s hard for these people to understand that.

These reactions also make it quite hard to be open with my personal accomplishments and interests. I can’t share the fact that I’m a respected sex blogger and have been recognized for my writing talents. I can’t share that I have had several notable companies contact me and offer blogging contracts based on that talent. Mentioning that I’m a sex toy reviewer makes matters even worse. When I’m excited about a new toy I got, a book I’m reading, or anything else along those lines I can’t talk about it even if I think it’s the most awesome thing in the world. Not only do I feel the need to hide my profession from people, my accomplishments and things I take pride in, but I also have to hide something that is a hobby and major passion of mine because people can’t get past that it has to do with sex and I find this quite disheartening.

It’s rare that I can tell someone where I work and not have those types of reactions, and this often leaves me feeling incredibly alienated and socially isolated. What I always hope for is someone to be mature and respectful and simply say “That’s pretty cool. I’m sure it’s an interesting job.”

When people do react in this manner it often earns them a lot of respect from me because they can look past something that’s so controversial in today’s society and see sex as something other than some taboo subject that women should pretend they know nothing about. These people are ahead of the times and can look past the negative attitudes our culture has about sex, and because of this it seems as if they have an incredibly open mind, and that’s something that seems quite rare, but is incredibly valued these days.

If more people were willing to see past the stereotypes and negative connotations surrounding sex I certainly wouldn’t have as difficult time as I do with explaining to people that I have a job I love and find incredibly fulfilling. That same kind of open-mindedness and acceptance would also make the lives of those who are trans, gay, bisexual, polyamorous, or otherwise sexually “unconventional” a lot easier and more peaceful. In a perfect world where everyone had an open mind none of us would have to hide the way we are or what we do because of the fear of rejection or judgment based on these closed-minded views on sexuality.

Yes, that’s right. We want YOU to write something for SexIs! See this forum thread for details and this one for this month's topics!
Tags:
Views: 1397
Related articles

(You may have known me as Miss Debauchery.)

I've been poking around here for over a year now and know the ropes pretty well (in a literal and figurative sense). If you have any questions about the site feel free to ask. I'm always willing to help.

Request Me as a Mentor!