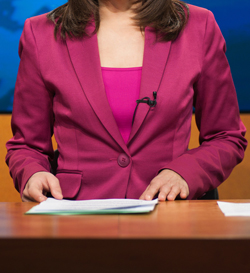 The evening news comes on to report about the protests in New York – the 1% protests. The reporter clutches her microphone as she gestures with her other arm at the crowds behind her with a serious and solemn expression.
She says something about how these protests may impact the 2012 presidential election. At this moment, a sudden gust of wind ruffles her hair and sends it into slight disarray. She stares at the camera and directs the news segment to return to the anchors in the studio.

Will people remember her words about these protests? Perhaps. Will people remember her hair being side-swept by the wind? That’s even more likely, especially for men. These answers may sound silly, but actually reflect the state of our society. Why would anyone care about how the reporter looked if she was directing our attention to the more important riots behind her? That’s precisely a question that we all must take a moment and examine.

No matter how we try to run from it, looks matter, especially for women. Women buy more than enough clothes to keep them warm and comfortable. They buy those I-will-wear-one-time-and-then-keep-in-my-closet-forever dresses which can reach hundreds of dollars. They buy eye-glaring makeup that is supposed to enhance their looks, but may instead detract from their humanity. They spend hours on hair, going so far as to spend an entire day for special occasions. While it is incredibly easy to say that women do these in order to make themselves feel good, the fact of the matter is that at some level, men expect these actions.

Last year, I went to hear a sports reporter talk about her time working in the media industry. She said that it was hard. When she first started appearing on TV to report on the latest football games or hockey matches, more people paid attention to her looks than to her words.

She has stopped Googling her own name now, but at the start of her career, she became quite depressed over all her search results. Men were commenting on whether she looked hot that day or whether she was too tan. No one commented on whether her words made sense in the context of the sports games. Online, she was the quintessential blond beauty without a brain.

The thing about the Internet is that it doesn’t even have to take that many people in order to characterize someone with a certain stereotype. It really only requires one person to write about a female reporter as a visual object, or a sex toy, before that post reaches the top of the search results and future searchers would be ingrained with such notions. Especially since most people are indifferent to how others are characterized, they will not bother to right incorrect information or highly sexist remarks.

Such regards from the audience ultimately affected how this reporter was treated in the studios and during her reports. Her makeup team would spend hours on perfecting her eyeshadow or blush, as compared to a few minutes on a male counterpart. Additionally, her peers and colleagues did not care about the research she had done to make a fruitful report for the upcoming games, so long as her hair was sprayed down enough so it didn’t move too much if there was any unexpected wind.

She later compared her time on TV to on the radio. She is now broadcasting sports information through the radio, and she says that it is much more rewarding for her. Without a visual image distracting her listeners, her words actually manage to sink into the brains and minds of her audience. People comment about her predictions and observations rather than her ability to stand pretty and stare into the camera.

Such an anecdote saddened me. While I never had any interest in pursuing a career in entertainment and visual media, I still realized how many obstacles females have to face if they do want to go into the field. Stories about women needing to sleep with men in order to make their way up the ladder no longer seem surprising. After all, if women are not being recognized for their intelligence, they will only be recognized for their beauty. And as beauty is embodied through the body, women are required to sell their bodies in order to impress their superiors. As these cycles continue and the stories come out, women are demeaned, men expect sexualized women, and it becomes even harder for females to climb the career ladder.

So I ask you to recognize this problem and do something to help fix it. Observe those around you and you may hear many more sexist comments than ever expected. But do not just passively nod along with every conversation. I urge you to point out the comments that people are spewing subconsciously and correct their words. By actually being aware of these problems, hopefully we can show that women are much more than just their bodies.

Yes, that’s right. We want YOU to write something for SexIs! See this post for details!
Tags:
Views: 1442
Related articles

nanamondoute
Just graduated from college and am ready for more of the clubbing scene (rather than just college dorm parties). So, I love reviewing dresses that I can wear outside. :)

What I am currently/will be reviewing soon: