I Am A Patriot 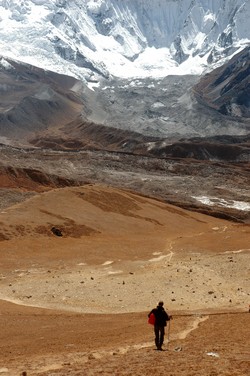 I spent some time watching the beginning of the relatively recent Ken Burns documentary on National Parks yesterday, on the fourth of July, which I felt was an appropriate I-love-my-country type of celebration in which to participate. The origins of the National Parks began with Yosemite and Yellowstone, and correspond to the major push for westward expansion, and any mention of studies, writers, scientists, and military in these times is so full of middle-aged white men, so full of a patriarchal, racist, classist monopoly on property, rights, decisions, and agency.

I love the National Parks. I love the John Muir writings on naturalism and geology, on the formation of rocks by glaciers and the fifty-mile two-day treks he used to take from his tiny cabin.

He built that cabin over a stream, so it trickled in and under one corner of the small rectangular room, which he said lulled him to sleep beautifully. The floor was made of flat stones, spaced far enough apart that ferns could grow through the dirt.

He used to climb to the tops of tall trees during a rainstorm to feel the reality of the storm, to feel what it was like to be a tree in the storm. He was not afraid of nature. He elevated nature to a spiritual status in his writings, and I feel a similar kind of awe when I’m engaged with the natural world, too.

Visiting the Pacific Northwest recently, I had a chance to be out in areas of the country that are still raw, still just earth, without the pavement and roads and grid systems of cities, without the hundreds of thousands of people depleting what natural resources are in the area, without the cars and the freeways and the commuting and the mass transit subway tunnels. I was reminded of what it’s like when the earth is left alone, allowed to simply stand still, buzzing with all of its growth and death and circles and cycles.

The mountains just stand, and the trees grow and fall and sprout and crash on top of them. The bears trek up and down the mountains, into their dens, back out to the rivers to find salmon. The salmon swim in the streams out to the open ocean, then come back, returning to where they were born.

The rocks close their eyes and listen to the sound of the water rushing over them. The silt and sand and pebbles from the insides of the mountains, gutted through the rich history of mining in those little towns, the remnants of the Gold Rush, were dumped into the channels and extended the land into new flat parts for building up the little town. Perhaps those rocks are still unsure of the sunlight and the wind and the elements, having spent so long buried at the heart of a mountain. Perhaps they know that is what they were made for, and from, the elements of water and air, the constant thrust of bare feet on sandy beaches.

There is one National Park in Southeast Alaska, Glacier Bay. Despite growing up just 30 or 50 miles from there, I never visited. There are no roads, the ice fields and glaciers and water and mountains cut off the direct transportation. You’d have to take a boat or a plane, and I never quite had the money to procure that adventure. What amazement, though, it must have been, for an Easterner like John Muir to come up to Alaska, to see this land where the glaciers come right down to the sea, where the ice age is still practically visible if you narrow your eyes and squint a little to make it just a bit fuzzy.

Now that I’m trying to visit all of the National Parks, I’ll have to make a point of visiting Glacier Bay next time I’m there. I love the very idea behind the Parks, that I as a citizen have a right to participate in the most beautiful, rare, extreme, and geologically interesting places in my country. I love that I “own” part of it, or perhaps more accurately, that no one owns it, that it is a place so glorious it owns itself, and everyone has a right to bare witness. It was a new idea, when made, and I love my country for the forethought and respect of nature it (so rarely) exhibits. But I cannot stomach the genocide. I cannot stomach the people who had been living on this land for thousands of years, lost and broken and destroyed.

It is hard to study Native American culture without the deep wound of colonialism, because it is nearly impossible to describe the art and spiritual beliefs without telling of war, famine, murder. I suppose it is much like the history of the gay rights movement, and how it is a great error to fail to include the AIDS crisis and the aftermath of activism and grief. As much as we would like to perhaps gloss over those parts in our collective histories, we were formed by them, forged against them, like a rock smoothed and carved by thousands of tons of ice over hundreds of years.

One could say those rocks were damaged, changed by something beyond their control, violated by this change. But that’s not the way we look at nature. I don’t feel sorry for those rocks, carved out and smoothed over—that’s just what happens when glaciers recede. That’s just the way it is.

So on this Independence Day, I celebrate the people who were in the United States first, the places that they were so respectful of and able to preserve from destruction for so long, and hope that the people living here currently can learn from their examples. I celebrate it not for the winners of the war, and those with the biggest guns, but for the underdogs, those who were and continue to be conquered by this empire. And for all of us coming together, perhaps, to find a new way to celebrate the great things about the independence of our country.

I am a patriot, after all.
Tags:
Views: 811
Related articles