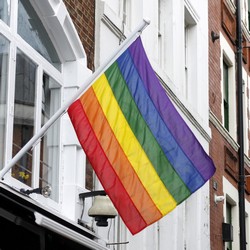 The ninety-degree days are rolling in, and I turn on an air conditioner in my bedroom and in the living room as soon as I walk in the door. The summer blockbusters are starting to be released, the kids are just about out of school, my pets are shedding their undercoats, I’m staring at the weight I packed on over the winter in the mirror and contemplating my swimming trunks.

It must be June.

And for queers and activists and all of those in this underbelly culture, June also means something special: it’s Pride Month.

What began as Christopher Street Liberation Day on the last Saturday in June, commemorating the Stonewall riots in New York City’s Greenwich Village in 1969, has morphed into the Gay Pride Parade, Gay Pride Month, and now, according to Obama’s administration this year, the LGBT Pride Month.

“An important chapter in our great, unfinished story is the movement for fairness and equality on behalf of the lesbian, gay, bisexual, and transgender (LGBT) community,” the White House press release reads. “This month, as we recognize the immeasurable contributions of LGBT Americans, we renew our commitment to the struggle for equal rights for LGBT Americans and to ending prejudice and injustice wherever it exists.”

I’m not sure exactly what the American federal government is doing to “end prejudice and injustice wherever it exists,” but I appreciate that they make that statement. (Of course, what their definition of prejudice and injustice is might not be the same as mine, but that is a side note.) This administration did sign into law the Matthew Shepard and James Byrd, Jr., Hate Crimes Prevention Act, which strengthens Federal protections against crimes based on gender identity or sexual orientation. It has been in progress since it was introduced to congress in 2001, and it is the first federal law to extend legal protections to transgender people, which I’m sure I don’t have to tell you is a big deal.

Aside from the legal activism, for queer artists and activists, this month is full of parties, Pride celebrations, fairs, projects, special events, queer touring artists, friends, picnics, barbecues—our cups runneth over with the gay of it all!

Me, I’m hosting a special pride-themed version of my monthly reading series, Sideshow: The Queer Literary Carnival, which I co-host and co-produce with Cheryl B. But aside from that, I won’t be doing too many special things for Pride. As I have elaborately complained about here in the past, I am pretty sensitive to the summer weather, I don’t particularly like being outdoors in the blazing, oppressive sunshine. I also don’t love the crowds. Sure, it is wonderful to see My People in all our traditional dress of leather chaps, rainbow suspenders, fetish gear, and crossdressing in everything from suits to ball gowns, and it has been formative to witness the sheer number of dykes who end up in Washington Square Park after the annual New York City Dyke March, but in just writing down the description I can feel a wave of exhaustion sweeping over me.

And I’ll tell you a secret: It’s been many years since I attended a Pride Parade. Somehow I feel like it’s my duty, my job, my responsibility, as a queer person, as an activist, to attend, but I always found myself ducking off into an empty coffee shop in the middle and reading a book, trying to get a moment of air-conditioned quiet to myself. (See above re: crowds and heat.)

Besides that, the commercialization of the Pride Parade has never been all that impressive to me. Major beer and vodka companies as sponsored floats? Pride pamphlets full of advertising, not for local queer-owned businesses (that’d be cool and even useful) but national corporations? What happened to overthrowing the binary gender system and the sexual revolution? Sometimes I think I should’ve been thirty in the 1970s instead of the 2010s. Then again, regardless of the hope and radicalism of the early queer activist movements, it is now that we are reaping the benefits of those ideals planted all those years ago, as with the Matthew Shepard Act.

Still, I wonder what the earlier activists have to say about the prevalence of dumbing ourselves down in order to be accepted. I wonder how early activists take the corporate sponsorship of what used to be our freak parade, our protest parade, for goodness’ sake.

But some queer folks just aren’t accepting that radicalism belongs to the good ol’ days, so much so that a new group in Austin threw a second pride parade this year; they are called QueerBomb. From their own description: “QueerBomb is a flash Force assembly of LGBTQIA individuals within the community who have found the current strategy and structure of Austin Pride to be non-inclusive, capitalist, heteronormative, safe and unchallenging. QueerBomb has been assembled with boisterous urgency in organizing a counter ‘Pride’ procession that carries a strong Queer message to the streets of Downtown Austin reclaiming the radical, carnal and transgressive lineage of our ever changing community, while celebrating every facet and form of our people as a unique and vibrant whole.”

Not everyone agrees with this kind of approach, however. Today, when our most visible LGBT organization is the Human Rights Campaign, and activist’s greatest focus is on gaining marriage equality, some queers are opting for the approach of fitting in, not rocking the boat, keeping our (or should I say, their) noses clean and heads down, with hopes that those nice straight people with all the power will see that we are not scary at all and give us some rights.

Me, I kind of like to be scary. Not scary enough that I become the thing that goes bump in the night or anything, but scary because I’m an actual threat to this broken system of gender and sexuality. It’s a challenge for me to embrace it when my work creates controversy, but I’m getting better at claiming to be a rabblerouser.

I guess that is also what some of the Pride events come down to, for me: What are they asking of us? Is it rousing rabble, raising consciousness, or just asking for us to buy a particular product? And who are these events for? Are they celebrations of our unique cultures of gender and sexuality, the marginalized folks who have made our artistic and activist careers out of helping others gain greater agency and sovereignty around bodies, communication, and desire? Or are they encouraging an outsider view of us queer folks as freaks, as weirdoes, encouraging us to go back under our rocks for the other eleven months out of the year?

When I talked to my dad recently, he said he didn’t believe in Father’s Day. Fathers should be appreciated every day, he argued. This is just a Hallmark holiday. I think I’ve inherited some of that attitude, since I too think Pride should happen year-round, daily, for queers and our allies, for those of us struggling personally and for all of us who believe and support what these huge, ever-growing movements are accomplishing. Pride should be inspiring all of us to be more active, more aware, and more incensed with prejudice and injustice, wherever it exists. Because of the way I dress, arguably crossdress, every day, because of my gender presentation, because of who I love, I can’t just have Pride one month of the year. I need it, I rely on it, every day. Because really (to get all Deep Lez on you for a minute and paraphrase Ani Difranco) every time I move, I make a queer movement.
Tags:
Views: 984
Related articles