The Nominalism of Masculinity, Machismo, and Manly-Manliness 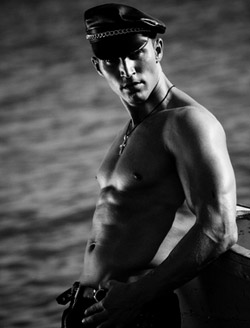 What is masculinity, anyway? Is it a single, inert thing – or is it open to anyone’s interpretation? Can you buy it, steal it, rub up against it, or administer it in pill form?

An excessive endowment; rippling muscles; rugged attire and uniforms; a bearish coat of body hair; loving the ladies. This culturally synthesized checklist of masculine qualities does not apply in a new millennium that has seen the creation of the metrosexual straight man and squelched the gay man’s need to assimilate using ‘butch drag.’ With the modern man relying less on his physical appearance to define his machismo, how does he tap into his masculinity? Heterosexuality has lost its potency as the main criteria for being a manly-man, replaced by a trait that can be found in both straight and gay men. It seems that confidence might be the boost needed to go from boy to man.

My personal life experience has made it obvious to me that to ‘act like a man’ is a learned behavior versus biologically being a man, regardless of sexual orientation. Despite being one of four brothers who was very aware of his status as one of the boys from a young age, I was drawn to Barbie and Dorothy from The Wizard of Oz. I began to comprehend that my tastes were less than boyish as adolescent hormones kicked in, and I became quite fond of GI-Joe and Rambo…in part because they were males. I was simultaneously finding my way as both a man and a man who loves manly men. Yet girls my age were attracted to Andy Gibb and Shaun Cassidy, the types of tender teen angels that generations of boys have publicly denounced as being ‘gay,’ stripping away the masculine identity to (hopefully) make the pin-up boys less appealing to the girls. But to this day, it is still the non-threatening asexuality of youthful icons like Clay Aiken and Zac Efron that attracts fragile young girls, who are not ready to take on the brutishness of full-fledged adult machismo like a fashion conscious pretty boy on the verge of manhood.

Does this mean that tween girls and the grooming sensibilities of gay men are defining the new masculinity? Classic signs of machismo such as excessive body hair have become more a fetish than the standard. The modern male escapes puberty only to immediately shave chest hair, morph scruffy beards into painstakingly sculpted goatees, and pluck unibrows into two individual eyebrows! Designer haircuts, designer jeans, designer earrings—how does an internally heterosexual young man who is externally as beautiful as an Out magazine cover model prove his masculinity and distance himself from the gay label? Current trends dictate that he grabs his crotch a lot, hits the steroids to join pro-wrestling, or if desperate measures call for it, posts a home video all over the internet of him giving an unsuspecting female a Dirty Sanchez. On the downside, frequent crotch grabbing could signify a man insecurely reassuring himself that something is down there, while the wrestling arena celebrates pretty men in speedos groping each other as thousands of cheering heterosexual men watch. And I can’t quite put my finger on the Dirty Sanchez approach, but let’s consider that the act was brought to the forefront of pop culture’s awareness by the Saved by the Bell character Screech, who has spent the remainder of his career trying to obliterate his typecast reputation as an insecure geek by proving his manhood in sex videos.

Remember in high school when geeks, dweebs, and nerds like Screech were bullied, taunted, and nailed hardest with the dodge ball because they were considered to be weak, wimpy ‘faggots’? Low self-esteem made them the targets of boys who built their own confidence by being aggressive towards the passive boys. And to the straight eye, that passivity is equated with the socially ingrained notion that gay men always assume the position (which begs the question: who does the straight man think is on top???). Even a gay man can play into this assumption, as I did upon first seeing the virginal geeks competing on the VH-1 reality show The Pick-Up Artist. I was convinced most of them were gay, but with good reason. Very often a young gay man’s ‘secret’ leaves him walking a not so straight line between gay and geek, appearing outwardly as awkward as contestants on The Pick-Up Artist. I myself was told by a female friend soon after coming out that the bold move made me somehow much less ‘gay’ and much more ‘masculine’ and attractive.

Is confidence the new masculinity? Consider the advice of ‘Mystery,’ the expert ladies’ man on The Pick Up Artist, who could be crowned queen of queens with his glam-rock-meets-Boy-George look. Mystery’s number one rule for his apprentices is to act cocky and uninterested around women. And guess what? Put the contestants in a challenge at a bar, and the geek who plays the ‘bad boy,’ going as far as offhandedly insulting his target, gets the girl! My partner and I were daily ear-witnesses to this phenomenon when we rented an apartment above a twenty-something serial monogamist. Each night’s drama began with her crying her eyes out while begging her boyfriend of the month not to dump her. His screamed response usually went something like “You’re nagging and clingy, and I don’t need this in my life!” Within the hour, she’d be howling in ecstasy as she totally gave it up for the stud. Naturally, we gay neighbors had to see for ourselves the mega hunk who could make a woman squeal like that, so we’d peek out our front blinds when the boyfriend of the month was leaving, only to discover he was nothing more than a cocky pipsqueak. Yet just that assured swagger made us both gasp, “What a man!”

Confidence is clearly a powerful aphrodisiac, so is it any surprise that many younger women find older men sexy? Sure, middle-aged men play the ‘my car is bigger than your car’ game, but generally, social pressures are not as rigid for these men, whose pride in their life’s successes is reflected in the way they carry themselves. They even exhibit old school physical machismo young men have yet to develop: broad shoulders, salt n’ pepper, fuzz above the collar, creases that distinguish hardened features. But with those qualities being shunned in the new millennium, it is the confidence that peaks the most interest, separating the boys from the men. This might explain why young men, unsure of their place in the hierarchy of masculinity, are now becoming willing participants in the cougar movement, drawn to experienced, aggressive and self-assured women twice their age. These generational relationships could also be a result of newly crowned ‘adults’ looking for nurturing replacements for their parents…but that’s a whole different article.

Perhaps our changing society has created this new masculinity—confidence wrapped in a pretty bow—out of necessity. Machismo of the mind has somewhat leveled the playing field for strong, confident women previously disadvantaged by their feminine physicality. It has also reassigned visual traits to all men that were once strictly used to single out gay men, who can now more easily homogenize. And just as society is ever changing, this current form of masculinity is only the next step in an ever evolving male identity.
Tags:
Views: 1024

Other articles by Daniel W Kelly