Love and Sex and Gay Marriage 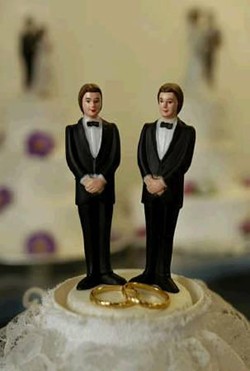 Could there be a better time than right now to be gay in a society on the verge of transformation? We have both the freedom to be out and in love and just enough limits to our rights to keep us from taking them for granted.

Making Love Out of Nothing at All

We get to watch over-the-top extremists on both sides of every issue who are so focused on their own agendas that they blindly support hateful hypocrisies, losing sight of the very humanity they claim to be trying to protect. Most importantly, we are experiencing overwhelming optimism that perhaps great change lies ahead, and that at last, humankind may actually live up to its name.

Still, it’s problematic to reside in a place where we assume that if any straight person so much as utters the word “gay,” his or her intentions are negative. Oversensitivity leads to the wrong battles being fought, which can lead to backlash and negative press. A trivial example would be when gay activists cried homophobia upon the 2001 release of Jay and Silent Bob Strike Back. When I viewed the film, I thought it was one of the most PRO-gay movies ever, filled with one joke after another that basically poked fun at how the comedic duo’s “bromance” is basically a gay relationship.

Or consider the gays who took it upon themselves to sue eHarmony because the dating service didn’t offer partner matching for gays. They must have believed they’d made won a great battle when the court decided that eHarmony did need to create a site for gays, but the eHarmony founders didn’t tap into our market sooner for a reason: they have conservative/religious backgrounds. Now that they’re being forced to cater to gay clients against their will, can we expect them to use their newfound disposable income to fight challenges like Prop8? Or will they hold a grudge, and instead fund legislation forbidding gay marriage? Perhaps the loftier goal for the lawsuit-filing gays would have been to launch a gay-centric dating service of their own.

Another fight for gay love—and marriage—that backfired was the Perez Hilton vs. Carrie Prejean/Miss California debacle. Perhaps Perez wasn’t totally out of line in asking about her views on gay marriage, since she is supposed to represent all people of the state (what-EVER!). Not crowning her the winner should have been satisfying enough for Perez—and sent a clear message that gays can fuck with your life path just as much as you can fuck with theirs. Instead, Perez took to his blog to call Prejean a dumb bitch, which began a name-calling cat fight that led to many to see her as the victim—actually bolstering her point of view!

What Does Marriage Mean to You?

Although Prejean never backpedaled by objectively suggesting that she believed gay couples should have the same protections as straights as long as it isn’t called “marriage,” that actually seems to be the sticking point for many people. There are very open-minded heterosexuals out there who believe gay couples should have equal rights and protections, but get stuck when it comes to labeling that equality as “marriage” (Vice President Joe Biden said as much in a debate with Sarah Palin before the elections).

What are both sides really fighting about here? Is it the right for gays to be legally coupled, or is it ownership of the word “marriage”? Straights continually try to “define” marriage as between a man and a woman, and have it legally interpreted that way. But to suggest that marriage has always been between a man and a woman is to either know very little about history, or to be furiously trying to rewrite it. Marriage has at varying times involved polygamy, child brides, and yes, even married priests…until the church realized it was losing money and land to widows. So should it really come as a shock that a progressive society may once again be redefining marriage?

Can permitting a word to be used by a particular segment of the population really lead to the end of this centuries-old institution? Gays aren’t looking to weaken marriage, but to actually take part in it, support it, and make it that much more of a solid institution. Not to mention, we want payback for all the damn wedding gifts we’ve been obligated to give to others over the years!

There’s really only one type of gay man who can and does undermine the sanctity of heterosexual marriage, and ironically, at the same time, poses a major threat to the gay community. That is the gay man who is so terrified of being gay that he marries a woman and openly lives a heterosexual life, yet sneaks off into the darkest gay corners of society to get the kind of intimacy he really desires. Of course, right-wing extremists often turn this situation back on the openly out gays who fuck “straight” men, pardoning the heterosexual’s indiscretions and pointing a finger at gays for home wrecking.

“Straight” guys suck their sexual gratification out of gay lovers, then leave to go back to their perfect, fake little lives. Sure, they battles their “inner demons” and the lies that attend them, but that’s their own choice. But while they use us to fulfill the emptiness in their souls, we’re also their worst enemy—carriers of their dirty little secret, a reminder of what they really are, and a springboard (and target) for their self-loathing.

They turn on us in an instant: voting against us being in the army, being married, having job protection—because none of that affects their “real” lives. To prove their heterosexuality, they mock us to their buddies, or, if the mob mentality is right, use violence against us. And they knows damn well that no matter how they treat us, when they come looking to get fucked again, there are plenty of us who will sacrifice meaningful, emotional attachments in exchange for that cheap thrill of fucking a straight guy—which puts them in the position of power, no matter who’s on top.

Society, not gays, has been creating this kind of monster for ages, which works to anti-gay propagandists’ advantage as long as the secret is never revealed. Some of the gay community’s fiercest enemies have been the most powerful homophobes. J. Edgar Hoover targeted gays as communists during the McCarthy era, along with his lawyer friend Roy Cohn, a gay Jew who did everything he could to destroy both gays and Jews during the same era. That tradition lives on in men like anti-gay public restroom cruising Republican Larry Craig, as well as those who come out “willingly” (when blackmailed into it), like former New Jersey governor Jim McGreevey. His “brave” move destroyed lives anyway. Can’t say the gay community was exactly proud when he announced that he is a “Gay American.”

The general population doesn’t quite comprehend that banning gay marriage causes problems like the case of the closeted married man. Gay marriage would help foster the tradition of marriage, bringing it back into vogue (as we bring everything into fashion with our fabulousness). Gays should be lauded for so desperately desiring conventional marriage when we aren’t being given many examples of it by heterosexuals! As it is right now, the institution is not doing so well, and gays are not to blame. Mainstream society is losing sight of what marriage actually means. It’s not so much appreciated as it is expected. It’s taken for granted. It leads to ridiculous reality shows where love and marriage are all part of a game.

In fact, on the day that Jon & Kate Plus 8 had its highest ratings ever, because our marriage-loving population was tuning in to see the couples vows go to hell, LGBT people in California were once again reassured that they shall not have the right to destroy the sacred institution of marriage. However, the 18,000 LGBT couples who said “I do” before Prop8 was passed are allowed to remain married. Won’t even as few as 18,000 married LGBT couples destroy society? Politicians argue that marriage is only a between a man, a woman…and God. No separation of church and state for gays, while any heterosexual couple can get married in a way that has absolutely nothing to do with a godly presence.

It is time for gays to play the boycotting games that the far right plays when protesting long-standing traditions like Gay Days at Disney. In California, as in any state that does not allow gay marriage, LGBT people should not get married. And by that, I mean, no more throwing huge shams called “commitment ceremonies,” which are, in essence, weddings without the payoff. The only ones getting paid are the same companies that profit from legal heterosexual weddings—catering halls, photographers, bakers, flower shops, marriage registries…the list goes on and on. We dump millions of dollars into the economy for events that DO NOT COUNT.

One could argue that these ceremonies are about professing true love in front of witnesses. The people closest to us—family and friends—already know we’re committed to each other. The reality is, marriage is a necessity for legal protections we are denied that can absolutely devastate our lives. In fact, the only “mockery” we’ve made of marriage is through all of these mock weddings. It’s got to be all or nothing. Otherwise, we’re just feeding the hands that bite us.

In Order to Form a More Perfect Union

By the hands that bite us, I am of course referring to those conservatives who are 100 percent sure gays are promiscuous demons who, over the course of a lifetime, have an endless array of sex partners. But if what we really want to do is sleep with everyone we can, how then, could we possibly destroy the ultimate contract of monogamy? Wouldn’t it stand to reason that none of us would get married, since we’re not into that whole monogamy thing?

Perhaps that’s the fear. Perhaps if they let us get married and we all start jumping into wedded bliss, there will be a very official record of just how many gays are not promiscuous demons. Have their theories about gay promiscuity disproved, and what’s next? Gays make great parents? Gays do live happily ever after? Isn’t that really what’s at the heart of the urgent religious movement to stop gays from being the humans we are? If they have to accept that the Bible was mistaken about us, doesn’t that unravel their entire faith, and challenge the sacredness of marriage at its very core? Just because religious zealots are trying to prove that homosexuality will destroy marriage, does it mean that society as a whole believes that gay marriage will somehow lessen the worth of marriage? Are heterosexuals going to throw their arms up in the air and say, “Well, since they can get married now, what’s the point?”

The coming universal epiphany is one of the premier landmark moments we’re going to live through in our lifetime, second only to the Adam Lambert/Kris Allen upset on American Idol. And even that managed to work its way to the forefront of this gay acceptance movement, reminding us that it’s now more important than ever for we gays to pick up that phone and call in our vote to make our voices heard, not only on mega-hyped television competitions, but more importantly, on mega-hyped affairs of the nation of which we are a part.
Tags:
Views: 1288
Related articles

Other articles by Daniel W Kelly