Eroticism & the Executive Branch: Sex Lives of the Presidents 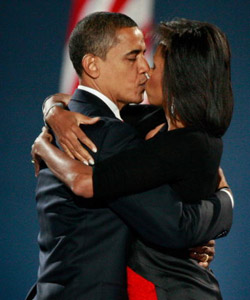 So everyone's all atwitter about the hotness of our new First Couple, right? But we've been obsessing on the sexayness of our Commanders in Briefs since, well...as long as we've had presidents. From the rumors of Lincoln's homosexuality to the derrings do and don't of FDR, to the inherent weirdness of Garfield—Wise Young Mommy takes a fond look back at the sex lives of a few of our presidents.

You know what they say: When the White House is a-rockin’, don’t come ’a-knockin’.

Oh, and how it has rocked over the years. From Kennedy to Clinton, Lincoln to FDR, there has been no lack of presidential nookie in that grand old mansion—and no lack of interest in the lurid details of our presidents’ most intimate (and sometimes controversial) affairs.

But what makes our current president, a.k.a. the “Hottie-in-Chief,” and his equally lusted-after first lady so especially fascinating to us, the American people? The media certainly has picked up on our obsession with the first couple and their celebrity status has risen faster than you can say, “Move over Britney and Lindsey.” But which came first, the media sexualization of the president and his booty-licious wife, or our desire to “read all about it?”

As previously noted, this preoccupation with our commander-in-chief’s sex life is not anything novel. But, somehow, the Obamas have ignited a whole new way of viewing the president and his first lady. From cover shots of bare-chested President Obama in only his swim trunks, to media outlets creating a controversial frenzy over Michelle Obama showing her arms (oh no, not that!) in the sleeveless dress she wore to her husband’s address to Congress, they are making history as the first couple in the White House to be overtly sexualized by the media—and we are eating it up.

There are many hypotheses as to why the Obamas are stirring the pot and becoming sex symbols in their own right. Some say it’s the fact that they are young, black and beautiful, and Americans haven’t had a young, sexy president since JFK graced the oval office. Others still say it is because President Obama and Michelle publicly display their affection more than any other president and first lady, which causes men and women alike to view them in a more sexual light. Perhaps Americans like seeing the president as a human, just like us, who puts his pants on one leg at a time—and screws his beautiful wife every chance he gets. Our enthusiastic fascination could be a way of relating to the president on a more personal level, in order to further trust him with the fragile state of our union. Whatever the reason, it doesn’t seem an interest that will be waning anytime soon.

Hey, did you hear there’s any Obama sex tape? Nah, turns out it’s just a virus that jacks up your computer. But I got your attention didn’t I?

So what did the country do before sex tapes, Internet gossip sites and Star magazine? Well, there was the good old-fashioned rumor mill, for one. In addition to countless “unauthorized” biographies that claimed to have all the kinky details of what happened behind closed doors at the White House. Whether it was a president or first lady’s sexual orientation (a little lesbian action for Eleanor Roosevelt, perhaps?) or an executive “piece” on the side (Clinton, JFK, FDR, the list goes on), there has been no shortage of theories, gossip and controversy. Let’s take a stroll back in history, and delve into a few of the bedside tales of some of the greatest (and not so great) leaders of our country.

We will start with the Great Emancipator. His nickname alone leaves him open to all kinds of sexual innuendo, but we won’t open that particular can of worms. He was a tall man, though. And you know what they say about tall men—big hands, big feet, big…hat (wink, wink). While there is nothing on record about that particularly juicy tidbit, there’s enough about his alleged sexual relationships and proclivities to build a memorial.

Abraham Lincoln may have been known as “Honest Abe,” but some argue he wasn’t exactly above-board about his sexual orientation. Rumor has it that Lincoln had multiple gay partners (one in particular named Joshua Speed with whom he had a lifelong friendship), and that his relationships with women such as Mary Todd and Ann Rutledge were contrived and forced.

Others maintain that Lincoln certainly did have a passion for the ladies, and that back then, close male relationships were commonplace and not necessarily homoerotic. Whatever. Gay or straight, flamboyant or reserved, people are still talking about it, debating and dissecting his sex life to this very day. (Seriously, Google him, people, and you’ll see what I am talking about.) But, no matter what the rumors, Lincoln will always remain a font of American mythmaking and stand for all that we, as a country, hold dear. Sometimes, the truth doesn’t matter. The man is a legend—a 19th Century rock star, if you will. And that will never change, just as our interest in the rumors and theories about which team he was swinging his bat for will never go away.

In The Presidential Cabinet

Another Google-worthy president is Honest Abe’s predecessor, the deadbeat Commander in Chief himself, James Buchanan, who has been touted as (possibly) the first gay president of the United States. Seems like homophobes on Capitol Hill have never been in short supply, and Americans are still fascinated with whether Buchanan was actually homosexual or not. Since pretty much the only thing he accomplished while in office was to lead us head-on into the Civil War—leaving Lincoln to clean up his mess—it may well be the sole item that makes the Buchanan presidency worth talking about.

Considering that Buchanan shacked up with a dude (Senator William Rufus King from Alabama) for many years, who was referred to as his “better half,” “his wife,” and “Aunt Fancy” by many around Washington, there is a lot more evidence to support this theory. Bingo! I think we have a winner—or loser, as the case may be. In the gay plus column, there’s Frida Kahlo and Harvey Milk, but it just stands to reason that the gay community has to lay claim to some dud historical figures, too. Gay rights activists are forced to accept that the first gay president wasn’t the most stellar presidential specimen. But joking aside, you have to admit that it is pretty impressive that a gay man ended up in the Oval office so many years ago, especially since it doesn’t appear as if he was locked up all that tightly in the closet. Progressive? Or were the American people just not paying close enough attention?

Hail to the Chief Chicken Choker

James A. Garfield is yet another president whose sex life (or lack thereof) Americans have had a field day with. Garfield was a wanker. Literally. That’s right, folks, President Garfield—who presided for a mere six months before being assassinated by Charles J. Guiteau—was a compulsive masturbator.

Garfield’s obsession with spilling his seed lead him to embrace theories that claimed too much whacking off doomed a boy to poverty and insanity and created homosexual desires. Pretty bleak for a little self-love, wouldn’t you say? Let’s just say Garfield took a lot of cold baths. The theorists who theorize on such topics suggest that Garfield was completely consumed by the concept of homosexuality, and that he read everything he could on the topic—from the choice parts of the Bible to Virgil and Seneca. Garfield’s diary portrays his insecurity over his masculinity, and contains information that he had a homosexual infatuation with a man named Oliver B. Stone.

Although he reputedly had many affairs with women, and was allegedly engaged to Mary Hubbell, Garfield never did marry, claiming that he was never engaged to marry Mary at all. Denial ain’t just a river in Egypt, Jim…but I guess we will never know whether this particular president was full-on queer or simply bi-curious.

Fast forward 60 years later to FDR, of whom there is no lack of salacious gossip and speculation about his libidinous liaisons. What, you didn’t know Franklin Roosevelt was one of the original “mack-daddies?” Polio couldn’t keep a brother down, yo; he got more trim than Ron Jeremy.

Eleanor wasn’t free from scandal, either. The pundits and public have been crowing for years that Mrs. Roosevelt was a lesbian. There is even evidentiary correspondence between the First Lady and journalist Lorena Hickok that suggests the pair did a whole lot more than dress shop and girl talk during their times together.

FDR was no angel when it came to his ability to keep it in his pants, yet he is still seen as one of most effective and well-respected presidents this country has ever had. And lesbian or not, Eleanor Roosevelt gives Hilary Clinton a run for her money in the powerful, famous First Lady department. This executive couple happens to be a triple threat when it comes to publicity. People have always spun yarns (some true, some not) about this historical couple, and that won’t ever change. Legendary president? Check. Influential and much-adored first lady? Check. Steamy sex lives and bawdy gossip? You got it. It’s not likely that FDR and Eleanor will be forgotten anytime soon, and for good reason.

What’s All This I Hear About Presidential Erections?

The White House has seen its fair share of infidelity and you may (or may not) be surprised at how many presidents actually had extramarital affairs while in office. According to historical accounts and unauthorized sources alike, the list of naughty, unfaithful presidents includes Thomas Jefferson, Warren G. Harding, Dwight D. Eisenhower, John F. Kennedy, Lyndon Johnson, George W. Bush, and Bill Clinton. I’m sure you recognize some of these names and could probably even name some of their girls on the side. Sally Hemmings perhaps, slave and baby momma to Thomas Jefferson? Marilyn Monroe, JFK’s famous tryst? And of course none of us will forget the blue dress and the infamous cigar-toting Monica Lewinski. These ladies have all become the stuff of legend, almost as famous as the presidents they screwed. Why? That seems to be the question of the day.

So which came first, the chicken or the egg? Are we just so interested in who is in the president’s bed (or closet, office, etc.) that the media has simply seen a need and filled it? Or have these journalists and biographers created the obsession themselves with their need to “show ’n ho?” Whatever the answer to that question, it certainly has created a new media outlet into which the American people are pouring time and energy on a daily basis. Unauthorized biographies will continue to sell like hot cakes, and now you can even satisfy your lust for the president with an Obama sex doll, or wear your presidential horniness on your sleeve with an “Obama Mama” or “I Love Michelle Obama” T-shirt.

What has this country come to, you may ask? Well, we only have ourselves to blame. Because if we didn’t read about it, buy it and talk about it, it wouldn’t exist. So until the day when none of us care to read about the sex lives of our presidents, we are going to be bombarded with all the dirty details. So, hail to the chief (and Mrs. Chief, too).
Tags:
Views: 1594