Sex and the Suburbs: Bi-Bi Mommy 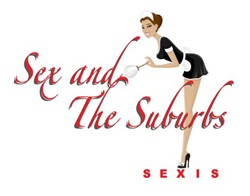 Logos by Melanie Amorim
The last relationship I had before I met my husband was with a woman. Yes, I am a bi-sexual woman, although I am not a great fan of labels and can’t truly, with all honesty, say that I know that I fit the definition of that title to a tee. Nor do I really care.

I Kissed a Girl and I Liked It

It all began back in high school. The lines between friendship and sexual attraction began to blur between some of my girlfriends and I, and I found myself wondering what it would be like to kiss them. Then I did. I chalked it all up to experimentation—you know, the Katy Perry Special. But as soon as the first kiss had left my lips, sweet and soft and so different from any other kiss I had ever had, I wanted more. I wanted to know whether her belly felt as soft as it looked and whether her breasts would feel the same as mine or different. And before I knew it, I had gone from experimentation to something more serious. But what exactly it was, I still didn’t know.

High school brought a few chance encounters with friends who were also curious about the whole girl-on-girl experience, and what resulted was a few threesomes, a couple of girly make-out sessions and a smattering of handholding, cuddling situations that certainly transcended your typical pubescent sleepover party behavior. I felt like I was finally ready to dive into the mysterious world of dating a woman—and Bonnie was the perfect candidate.

We worked together at a bookstore that shall remain nameless, me in the café and she among the stacks. She had long, blonde hair and skin that always looked like she had just washed her face. She never wore makeup and she dressed plainly, in jeans and tee-shirts, but I thought she was one of the most beautiful things I had ever laid eyes on. When I caught a glimpse of her pink triangle tattoo peeking out from under the strap of her tank top one hot day in July, I knew it was meant to be. I was going to ask this woman out on a date.

Am I or Aren’t I? And Does it Even Matter?

Bonnie was my first relationship with a woman. It was exciting, passionate, sweet, soft, and it felt so rebellious. We went on dates, we held hands in public and we got caught by a cop making out in her Toyota Tacoma in the parking lot of the bookstore. For the first time, I actually started to entertain the idea that perhaps I was a bi-sexual woman—that I was attracted to women in the same way that I was attracted to men. But it still wasn’t as simple as that.

Because I wasn’t attracted to every good looking woman that I came across. I didn’t typically fantasize about fucking women; I mostly fantasized about men. And I was fairly certain that I wanted to eventually, someday, marry a man and have children. However, certain women piqued my interest and made me pursue them—usually a combination of personality, interesting features and a tenderness that made me feel safe and cherished like no man had before. And when I was with them, they turned me on just as much as a man could. These chosen few female relationships were each special and exciting in their own way. So I resigned myself to the fact that I didn’t care what I was, I was just me—and I liked to date girls. Was I bi-sexual? Or was I just a very open-minded heterosexual woman? Whatever my label, I was okay with it, and I was okay with liking women. But when I met my husband, I knew that I would never be with another woman again.

Married…with Children (And Fantasies of Strap-Ons)

My husband married me knowing that I had had relationships with women, and that I was still best friends with the woman from my last relationship. But he also came into it knowing that, although I was attracted to certain women, I didn’t intend to have sexual relations with any of them—and he was never going to be able to get me and my best friend drunk enough for a threesome. In my eyes, I had chosen who I wanted to be with, and that person just happened to be a man. Just because I was also attracted to women didn’t give me a free pass to have sex with someone outside of my marriage, no matter how much my husband was dying for me to. Because, yes, my husband would love for me to get down and dirty with some hot, wet pussy while he watched. This is a known fact. But, for me, it just doesn’t feel right, and I am not ready to go down that road within our marriage. Do I still fantasize about women on occasion? Yes. Just like he fantasizes about other women. And, yes, I am slightly regretful that I never got to partake in the only un-fulfilled sexual fantasy of mine—fucking another woman with a strap-on—but I am not about to strap up and go to town, just like he’s not going to do likewise. I guess I’m just that old-fashioned.

So how do you make it work? If you’re a bi-sexual mom and you have successfully brought that sexy redhead from the book club home, or you are allowed to hook up with someone other than your partner, as long as said person has a vagina, I want to know how you do it without creating weirdness, tension or jealousy. In my opinion, there isn’t much room in a marriage or relationship for bringing in “guest stars,” but I want to know how other couples are embracing mom’s bi-sexuality instead of placing it in a little box and marking it as “inactive.” Because once that box is opened, you never know what is going to come out.