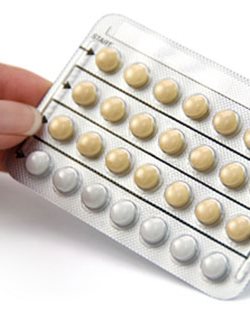 http://www.scientificamerican.com/article.cfm?id=birth-control-pills-affect-womens-taste
Today's article focuses on three other types of contraceptive methods. We will discuss their efficacy, any special features, and their side effects.

Here we discuss the barrier methods.

Condoms
The first of these barrier methods is the condom. There are both male and female condoms, and these prevent pregnancy by preventing sperm access to the egg. They come in three main materials: latex, polyurethane, and lambskin. Condoms also have the added benefit of preventing sexually transmitted infections (STI's), which hormonal contraceptives do not do prevent against. You still can get an STI if you use a condom, though, so still be careful.

Latex condoms can cause an allergic reaction in some people, so you do have to watch out for that. They are also not compatible with oil based lubricants and products. If you get a yeast infection and use an ovule or a cream, this can weaken a latex condom.

Polyurethane is compatible with oil based lubricants and is said to be more sensitive, but it is also more prone to breaking.

Lambskin is actually the inside of a lambs intestine, so it is porous and will let bacteria through. Lambskin condoms do not protect against STI's. These condoms are compatible with all lubricants, though

Diaphragms
Diaphragms are reusable dome-shaped caps that cover the entrance to the cervix. In doing so, they prevent sperm from reaching the uterus and egg.

The advantages of a diaphragm are:
1. It can be inserted before intercourse, and you can leave it in for 24 hours. So, it will not interfere with foreplay.
2. It decreases the risk of pregnancy and STI's.
3. It can be used during lactation.

There are some downsides, though. These downsides are as follows:
1. It requires fitting, so you need to visit an MD to get one.
2. It is made out of latex, so it is not compatible with oil based lubricants.
3. It causes an increase in urinary tract infections.

If used perfectly, it has a failure rate of 6%, but typical use results in a 20% failure rate. Typically diaphragms are used with spermicide.

Sponges
These are sponges that are impregnated with spermicidal agents. They are easily accessible, but unlike a diaphragm, they do not require fitting. They, too, can be left in place for 24 hours, but they are not as effective at protecting against STI's as the diaphragm is. They also increase the chance of a bacterial or yeast infection. If used perfectly, they have a failure rate of 10%, and with typical use, there is a failure rate of 20%.

Cervical Cap
These are smaller than a diaphragm, and they fit over the cervix. They, too, prevent sperm from getting at the egg. They can be inserted before intercourse, and they can be left in for up to 48 hours. They, too, protect against STI's, and they can be used during lactation. They do require a visit to your doctor for fitting, though. They also have to be left in for 6 hours after intercourse, and they are more difficult to insert than a diaphragm (they are made out of rubber). With perfect use, they have a 9% failure rate, and with typical use, they have a 26% failure rate.

Spermicides
These are not commonly used alone, as they are not that effective. They are normally used with a sponge, a diaphragm, or a cervical cap. Spermicides are products that kill sperm. They come in jellies, foams, suppositories, and sponges. They are cheap and easy to use, but they can cause irritation. They are also messy, and have a bad smell and taste. With perfect use, they have a failure rate of 6%, and a typical use failure rate of 26%. Just as a note, adding spermicide to a condom does not make it any more effective. So, if you are using a condom, there is no reason to use a spermicide.

This is contraception that permanently lasts once it is done. What they do is the prevent the passage of either sperm or the egg through the vas deferens and Fallopian tubes.

In females, this is called a tubal litigation, which is commonly referred to as getting your tubes tied. This has a failure rate of 0.5% after one year, and 1.8% after 10 years.

With both of these methods, surgery is required. The side effects all arise from the surgery for these forms of birth control. So, you can get pain, swelling, tenderness, and scarring. You can also have complications from the surgeries, too. If you are thinking about getting either of these procedures done, you should talk to your doctor, though, as I will not discuss all of the details in this article.

Finally, there is the natural family planning method. This method revolves around understanding the timing of a woman’s ovulation cycle, and then abstaining from sex for certain periods to prevent pregnancy. This method has a failure rate between 1 and 20%.

Basal Body Temperature
In this method, you take your temperature each morning as soon as you get up. You track this temperature for a few months to get an idea of your body. What you should see is that once a month, your temperature will elevate by 0.5 degrees Celsius and stay elevated till menstruation, and then it will drop back down. This temperature spike occurs right before ovulation. So, once you see the spike, you should abstain from sex for at least 3 days.

Calendar Method
To do this, you chart your menstrual cycle over a couple of months. It assumes that ovulation occurs 12-16 days before menstruation (as you might remember the luteal phase is quite consistent). So, to determine your fertile period you:
1. subtract 20 from the length of the shortest cycle (fertility begins)
2. subtract 10 from the longest cycle (fertility ends)

Lactational Amenorrhea Method
When you are breastfeeding, the hormones that cause lactation cause you to stop ovulation. So, as long as menses (your period) has not returned, you are fully breastfeeding, and the baby is less than 6 months old, then this method is 98% effective.
Tags:
Views: 1226
Related articles