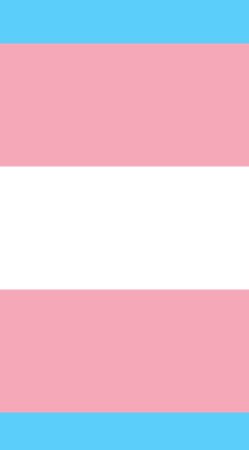 https://en.wikipedia.org/wiki/Transgender_flags#/media/File:Transgender_Pride_flag.svg
Sex with a transman, what’s that like? They have a vagina, right? So it’s like a butch girl?

There’s plenty of assumptions cisgender people tend to have about sex with transgender people, and of course there is no right answer. However, there are a lot of wrong answers.

You’re probably thinking if a transman has the same “equipment” as a ciswoman, then what is the difference in bedding them?

Now dysphoria will play a factor, and each transman is different, so depending where they are on their transition you’ll have to ask their comfort level with their own body before you have sex. Some will want you to touch their genitals, or their chests, or their vaginas, others will not.

It also controls your sex organs. Transmen on hormones tend to have genital growth. Their clits (some of which prefer to call them dicks, t-dicks, etc) extend and grow and look like miniature phalluses. It grows and gets erect just like a cisgender man’s dick, just on a much smaller scale. Enough so that you can perform oral on just the phallus part quite effectively. With the added bonus of not choking, if you like that.

Another difference is surgical. Have they gotten top surgery to reconstruct their chest to a more masculine one? Have they gotten bottom surgery to have a phallus? There’s two categories of bottom surgery too, meta or simple release, or phallo. Meta makes the same result as a small Greek statue penis, and phallo is near identical to a natal penis without sperm. Both if meta is long enough, can penetrate. So there is a lot of physical differences between cisgender women and transmen, all of which vary and can not be assumed by the sole fact you know someone is transgender.

But going back to ‘the obvious answer of “the gender is different,”’ you’re most likely attracted to gender presentation, not genitals. Unless the only way you find a passing man in the street attractive is by stopping him and demanding to see his genitals, you don’t have a “preference,” you’re just unfamiliar and shouldn’t let your own assumptions stop you from making connections. I’m not saying you have to have sex with a transman, no one if forcing you, but don’t believe it’s sex with a woman. It’s very different and the bodies might be similar, but they are not the same and shouldn’t be treated the same.

Besides, if you want to be penetrated and that’s what’s stopping you from sleeping with a transman (if you are assuming he hasn’t gotten some form of bottom surgery) strap-ons exist, with the added benefit of ones that can vibrate.

Though of course, no one is saying you HAVE to have sex with anyone you don't want to, but we're also saying that if the misconceptions on how to have sex with transmen is why you're hesitant then educating yourself on real trans issues is the best thing to do to be an ally.
Tags:
Views: 73

Slinkykinkyduo
Reviewing toys and products that can be used in trans friendly ways to bring awareness for other guys looking at sex toys for our bodies in a mostly cis-girl centric market.