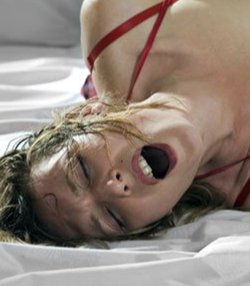 http://yoy50.wordpress.com/2011/04/15/80-percent-of-women-faking-orgasms-says-study/
If you've been having trouble reaching the big "O," it may not be your partner's inability to please you. It may be a misunderstanding as to what part of your lady bits needs to be manipulated for an earth-shattering climax.

"No woman gets an orgasm from shining the kitchen floor."

Welcome To The Wonderful World Of "O"s!

Female orgasm can be confusing for any woman and/or her lover. This is easily understood as many people aren't even aware of the many types of orgasms and stimulations that can be achieved. If you are one of the bewildered, have faith. This article will familiarize you with female orgasm inside and out.

What happens during an orgasm? When a woman reaches climax, her whole body reacts the same way regardless of what part of her body is being manipulated.

During a climax:
-She feels clitoral stimulation
-Her heart rate, blood pressure, and respiration rate increase.
-Tension builds in her pelvis
-Muscles contract in her body, mainly in the vagina, uterus, rectum, and pelvic floor.
-Tension is released upon the orgasm.

Blue clitoris? Yep. Believe it or not, women can get a blue clitoris, which is equivalent to "blue balls" in men. As you may or may not know, the clitoris and the penis are very similar after conception, but males go on to develop a penis. If a woman gets turned on, her clitoris, much like the penis, gets engorged with blood. If she doesn't reach her climax, the blood won't release and she will feel discomfort-just as men do. However, roughly 26% of woman have difficulty reaching orgasm. More often than not, it's a mental block that keeps her from reaching orgasm, not her lover.

Different types of orgasms
Sigmund Freud was the first to suggest that there were indeed two different types of orgasm. However, sex researcher Alfred Kinsey denied Freud's claim, and his view was that there is only in fact one type of female orgasm. Other sexperts claim that women can experience three different types of orgasm: clitoral, vaginal, and blended. I personally believe in the simple clitoral and G-spot orgasm, although I have yet to experience a G-spot orgasm. Clinical studies prove that Kinsey was right. Sexologists now agree that an orgasm is an orgasm no matter what part of the woman's body or genitalia is being stimulated.

Clitoris
The only function for this little piece of erectile tissue is...you guessed it...to provide pleasure! Researchers have not been able to find any other reason for its existence which is fine by me! Note that because the clitoris is so easy to find, this is how orgasm is usually achieved.

Vagina
Inside the vagina, you can locate the infamous Grafenberg spot, better known as the G-spot. It is found on the front wall of the vagina between the opening and the cervix. Theory suggests the G-spot is one of two things: either a bundle of nerves coming from the clitoris or a series of glands that produce lubrication.

Single orgasm:
When a woman experiences one rush of pleasure that lasts anywhere from a few seconds to a minute.

Serial multiple:
Although difficult to achieve, it is possible for a woman to achieve multiple orgasm where several orgasms are had in a row, that is, one directly after another.

Sequential multiple:
These orgasms occur in a sequence that separates each orgasm by a few minutes. It's been described as a roller-coaster ride.

How to get there:
Many woman claim that reaching orgasm is more difficult via penetration than it is via stimulation of the clitoris. Most women actually agree that fingers are the preferred tool. Any type of sexual activity can lead to an orgasm. There are even some women that can bring themselves to climax without being touched, although it's rare. Massage, foreplay, direct stimulation, and even talking can make a woman reach orgasm. Still, most women find directly stimulating the clitoris is the easiest way to get them to climax.

Words from my fiance: "During sex, I make it my ultimate goal to satisfy my woman. With that being said, if I can fulfill my sexual needs, then I should be able to satisfy her first. That means in the rare occasion that I have my orgasm first, I feel like, as a man dedicated to pleasing my lady, I have to keep going until she is satisfied. On a scale from one to ten, getting my orgasm is at a 5, while I prioritize my lover's at 10. But any unselfish man would definitely feel the same.

I could be wrong, but this is only my personal opinion. But, I see a difference in a woman after she experiences an orgasm. A big one. It seems to level out hormones and make their stressful situations easier to deal with. The last thing I want is to add on the stress of not getting good sex on top of the stress of her daily every day life. Women go through a lot in life and satisfying my lady is the least I could do. Respect for women is my inspiration to do right by my fiance because when she is happy, I am."

I hope you enjoyed this article. So until next time, keep it coming!
Tags:
Views: 2059

KinkyNicki92
I am 20 years old. Quirky, fun, and outgoing. I am sexually dominant and i could never have too many toys. I am currently a college graduate with an associates degree in medical science. I am passionate about what I do and I wouldn't change it for the world.

I am new to the eden community and to the toy world in general.I just got upgraded to advanced contributor so yay! Sex toys was originally just a way for me and my fiancé to spice up our sex life by introducing new things.

Little to my surprise I've actually discovered a lot about myself and my own body since then. Ive met so many cool people since Ive joined eden. If you have any questions just ask, my inbox is always open :)

Also, I have finally began marketing and selling my personalized sex toy pouches! Im very excited about it. If you're interested in purchasing one and would like more information about colors and pricing please message me on here or email me at tchilds82992@aol.com :)