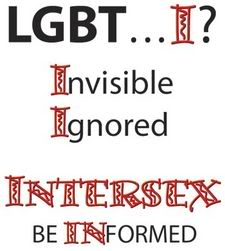 http://s276.photobucket.com/user/feministing/media/intersex.jpg.html
You're sitting in your ob-gyn's office holding your partner's hand. Your womb is full with your unborn child, and you're happy to finally get to see your baby on a monitor. It's your ultrasound, your doctor smiles and begins rubbing that cold sticky gel onto your stomach. Then they of course ask, "Are you hoping for a boy or a girl?" Like any good parent you reply, "So long as it's healthy." But is this really the truth? 1 in 1,500 people is born intersexual.
That's a big scary word, but how many of us can actually say that they know what it means? Intersexual is defined as "the condition of having either both male and female gonadal tissue (testes or ovaries) in one individual or of having the gonads of one sex and external genitalia that is of the other sex or is ambiguous," by the Merriam-Webster online dictionary. Intersexuals are often called hermaphrodites, but this term is incorrect. Hermaphrodites are organisms who are fully male and female, a physical impossibility for humans. This would mean having a fully formed and working uterus, ovaries, vagina, penis, and testicles all at once. No human has this kind of anatomy, so most intersex individuals find the term hermaphrodite to be offensive.

There are several physical conditions which are classified under the title of intersexual. There are three main subsets of conditions. These subsets are true-hermaphroditism or ovo-testes, and pseudo-hermaphroditism of both male and female subsets. In the case of true-hermaphroditism or ovo-testes, the individual is born with both male and female glans tissues within their gonads themselves. These being ovaries and testicles, hence they are called ovo-testes. A ‘true hermaphrodite’ may have a combination of one testis and one ovo-testes, two ovo-testes, or one ovary and one ovo-testes. While both testicular and ovarian tissues are present, they will not function as typical gonads would. This condition may or may not create a level of ambiguously sexual distinction. They may look entirely male or female, though in some cases the ambiguity is still possible. In many cases those who have ovo-testes will need to get tested for testicular cancer and may need to have the tissue removed.

The ‘male’ portioned subset of pseudo-hermaphroditism refers to those with testicles. Other characteristics include the forming of small breasts and less virility, lowered sex drive, and erectile dysfunction. Male pseudo-hermaphroditism is thought to be caused by a reduction in the response of the body to testosterone. Testosterone is a hormone released in larger portions by ‘men’ than ‘women’ which signals to the body how to produce cells in both the testicles, ovaries, and prostate. It also determines other things such as body hair, bone mass, and muscle development. Another possible cause of male pseudo-hermaphroditism could be the consumption of estrogen while pregnant. If you're a soon to be mother you may wish to address this topic with your doctor before taking any estrogen supplements.

‘Female’ pseudo-hermaphroditism refers to those who have ovaries, but may still have other male characteristics, such as a penis. Some causes of this condition may be congenital adrenal hyperplasia. Congenital adrenal hyperplasia (CAH) is when excessive androgens are produced due to a lack of other hormones. The individual will still have the XX (female) genetic coding, however CAH causes the labia and clit to enlarge and physically appear as a penis and testicles. There are higher levels of testosterone in the body than normal, leading to a faster rate of reaching puberty and a heightened sex drive.

AIS or Androgen Insensitivity Syndrome, is an intersexual condition referring to those who are coded genetically XY (male traditionally), and may have testicles present. Androgens are the steroids produced as hormones by testes to develop male sex organs. A person with AIS, rather complete or partial, has a resistance to these androgens so their bodies don't form male sex organs normally or completely. Many times these individuals will have mostly female characteristics physically and still have the male genetic coding. A vagina may form along with breasts, however no uterus will be present, and testes may form internally in non-traditional locations of the body.

Complete AIS is an extreme resistance to androgens which leads to a failure in penile development. This causes the individual to look female at birth and may happen in 1 of every 20,000 births. Along with lacking a uterus, the person will also have markedly less hair on both their armpits and in their pubic region. Having partial AIS can be physically marked many times, as both male and female characteristics are present. They also may have nearly closed outer labia, an enlarged clit, and shortened vaginal sheath. Those who have incomplete or partial AIS may have one or both testicles fail to drop. Other issues they will face are hypospadias, which will be explored further later in this article, and Reifenstein Syndrome.

Most people with complete AIS will not become aware of their conditions until puberty when menstrual flow fails to start, or they have trouble conceiving. Those with partial AIS may have their condition discovered during childhood due to the appearance of some physical traits from both sexes. There are several tests available to aid in discovering if an individual has AIS. These tests range from various blood tests, to gene karyotyping, and even pelvic ultrasounds. If testicles have formed in a non-traditional local they may be removed via surgery, this is important because of the risks of testicular cancer. Another possible treatment that may be prescribed is estrogen replacement therapy.

Other intersexual conditions include hypospadias, Klinefelter Syndrome, Turner Syndrome, and Progestin Induced Virilization. Hypospadias, mentioned before, is the condition in which the urethra, or pee-hole, is located on the underside of the penis instead of at the tip. Another intersexual condition is MRKH or Mullerian or vaginal agenesis. This condition is marked by present ovaries, however the uterus will be absent, misshapen, or very small.

Klinefelter Syndrome is a variety of genetic mosaicism. Klinefelter Syndrome is genetically coded as chromosome 47 XXY and occurs in every 1 out of a 1,000 male births. This is typically found in males and is physically marked by small, firm testes. They will not produce sperm and virility will be lessened. Due to the smallness of their testicles and lower testosterone levels, puberty may arise slowly and body hair will be lessened or absent.

Turner Syndrome is the female karyotype of having only one X chromosome present and functioning. Typically women have forty-six pairs of X chromosomes, so a woman with Turner Syndrome will have underdeveloped sexual characteristics. These women will sometimes be short, have swollen hands or feet, a broad chest, and suffer infertility. Mosaic Turner syndrome, having some chromosome pairs of XX and others with a single X, may also occur. When Mosaic Turner Syndrome occurs an individual may not exhibit the traditional Turner syndrome traits, but may show other intersexual characteristics.

A person born without functional sexual glans, ovaries and testes, has what is called Swyer Syndrome. While some ovarian and testicular tissues may be present, they cannot produce the necessary hormones for further sexual development. Individuals with Swyer Syndrome will look female, however, they will not be fertile, menstruate, develop breasts, or body hair. Often hormone therapy is prescribed.

Finally Progestin Induced Virilization (PIV) is a form of intersexuality brought on by the ingestion of progestin maternally. Mothers taking progestin while pregnant should be aware of the risk of PIV in their offspring. During the 1950’s and 60’s, especially, this was popular as progestin was believed to help reduce the rate of miscarriages; however this is an ineffective method. Instead these children, who are genetically female, will have a virilization of their developing sex organs. This virilization will appear as enlarged clitoris or even the forming of a complete penis. Despite the external appearances of these people, they have ovaries and uterus internally. Although, in extreme cases the vagina and cervix may be absent altogether.

With all these forms of intersexuality and intersexual conditions it's surprising that intersex individuals haven't received more notice and recognition. This is only the first in a series of articles focusing on intersexuality today. Look for the next article in the series on some of the most common religious and social issues facing intersexuals.
Tags:
Views: 1430
Related articles

Other articles by zj22