Domestic Discipline vs. Spanking Fetish: One for each Cheek 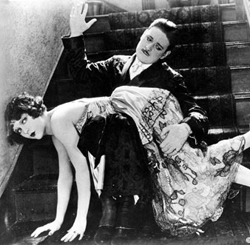 BuenoJoe.com
"Do you need a spanking, young lady?" he would ask me in a firm warning tone. "No sir." Yes.
This wasn't a new situation for me. I am involved in a domestic discipline relationship. The kicker is, I have a spanking fetish as well. So to receive a firm bare bottom spanking across my man's lap is not only a punishment, leaving me in tears, but a source of sweet pleasure throughout my body. The question was, could I find a way to find pleasure in my fetish along with domestic discipline?

I was very young when I first realized my interest in spanking. I was spanked occasionally as a child, nothing serious and nothing memorable.

It started out innocent enough. I would read children's stories with a spanking scene described in it, and feel a strange tingle. I would watch "I love Lucy" on the television, and be riveted to the screen when Ricky spanked Lucy over his lap. I began to engage in spanking play, adding a scenario involved around spanking, whether it be with my barbies or other toys. I knew I liked and enjoyed spanking, but never gave it any more serious thought than that.

As an adult, I did some research and eventually came to learn that I have a spanking fetish. This whole new world of possibilities opened up to me.

Every adult relationship I have been in has involved spanking in one form or another. When I first started exploring my fetish, it was simple role play and swats over the clothing. As I grew older, and started a serious relationship I knew I needed something different.

By this point I had bought spanking erotica, spanking paddles, watched spanking videos, etc. My fetish was very much out in the open and my boyfriend knew it. Luckily, he understood, and I was surprised to find he shared the same fetish as I. That is where everything began. We engaged in role playing, his firm warnings and firm hand on my bare bottom sending me over the edge. I knew I wanted more.

Early on in our relationship, we discussed our preferences and ways of thinking. We both discovered, through each other, that he is dominant and I prefer being submissive. We decided to try a new relationship dynamic that we thought would be good for both of us called domestic discipline. I would be receiving discipline and guidance from my man, and he would be asserting control and dominance. His one basic rule was to obey his wishes, and to trust him completely to guide me. I love him and knew he wouldn't push me past my boundaries, or tell me to do something that wasn't for the best. So it began.

The first time I found myself over his lap, panties down, receiving a firm spanking for disobeying, I was in heaven. I knew I hadn't listened to him, and was now receiving my painful justice.

He could tell I was enjoying it, and began raining harder swats on my already sore bottom. It became a completely different experience for me. As he continued spanking me, I broke down and cried over his lap. I knew I had disappointed him and was feeling contrite for what I had done wrong. I knew he loved me and was doing what was best for me to stay happy. I was no longer feeling pleasure during the spanking because I felt so disappointed in myself for letting him down and having to get a spanking like a little girl.

After every spanking, my man holds me in his lap, cuddling and soothing away my tears. I can't help but love him even more when he is so tender.

I knew in my heart we were happy and fulfilled with our domestic relationship. But that leaves my spanking fetish in question. We had a long talk together, and over the months, I think we have been able to balance my pain and pleasure. I am able to differentiate between the two. I know when I have disappointed my man and am about to get a punishment spanking. I also understand the predatory look in his eye when I'm about to get spanked out of sheer pleasure for both him and my aching bottom.

So next time he asks me" Are you ready to get your spanking, little girl?" And I answer yes, I know in my heart it's true. Domestic discipline and a spanking fetish both belong in my life; one for each cheek.