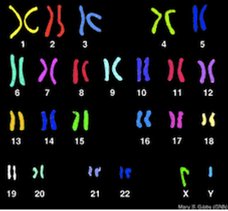 http://scigjt13.files.wordpress.com/2011/03/karyotype.gif
When does the desire for children turn grey? Is it okay if you know you will give your child a disease? Is there a line? And where is it?
Infertility is not a light subject. The chances are that you know individuals who have had trouble conceiving children (or you, yourself may be struggling). While the statistics are a little different among developed countries, it’s a conservative estimate to say that about ten percent of couples will experience fertility issues while trying to conceive.

Usually, a couple will be referred to a fertility clinic anywhere from six months to two years after trying to conceive naturally. This number changes depending on where you live and the age of the female. The clinic will use their resources to determine the cause for infertility and potential ways to conceive a child.

The causes for infertility are plenty, but most issues can fall into one of these categories: age related infertility, congenital defects of one or both partners, trauma and injury, hormonal fluctuations, and anatomical abnormality. The nature of one or both spouse’s infertility will be the core of the battle plan for a biological child.

This is a large and sensitive issue and this article does not intend to declare what is “right” or “wrong." It is simply to create a discussion and ask questions. Given the data and information we have about fertility, sterility, clinics, and treatments such as IVF or in-vitro fertilization, it’s time to think of such questions. One being: is there a point where a couple should not pursue biological children?

Committing to IVF is not a guaranteed success. Sometimes the cycles will fail for multiple reasons. To summarize, IVF is a technique used in which the egg cell is fertilized by sperm in a laboratory environment. Generally, multiple eggs are fertilized and then observed in the lab for progress and vitality. If the eggs remain vital and multiply, they can then be implanted into the uterus. Sometimes the eggs do not grow once fertilized. Many times, the egg will not implant into the uterus and other times it will implant only to stop growing shortly after.

Because of these challenges, IVF leads to more multiple births compared to naturally conceiving couples. The reason for the multiple births is because more than one egg is generally placed in the uterus during an IVF cycle. This lowers the number of cycles a couple might have to go through to conceive, for every cycle of IVF can be very expensive. Yet, an already high-risk pregnancy becomes a higher risk when multiple births are involved. This leads to increased stress on the mother.

Also, once a child by IVF is conceived and implanted, there are other potential challenges. The National Birth Defects Study in the U.S. found that children born to IVF are more likely to have defects such as septal heart defects and cleft palate.

There is also a theory that children born to IVF and similar treatments are more likely to get sick with certain genetic disorders. This theory takes more of an evolutionary backing, but is still more of an opinion as studies are currently being conducted. It is thought that sterility (not in incidents of trauma) can occur for a reason. One reason could be that the resulting children could be at greater risks of certain genetic ailments. It could be summed as Mother Nature being Mother Nature.

Regardless, there are other reasons to look at IVF and such treatments. For example, let’s say the potential father has a spermatogenesis issue. This means he is unable to form healthy sperm. There is a treatment called ICSI, or Intra-cytoplasmic sperm injection, that can be used where the sperm is injected directly into the egg. This form of infertility can be genetic. If it is, a father can pass it on to every son he has. This can create a paternal line of sterile individuals for generations.

Essentially, is there a line to draw on the quest for biological children? No one person should decide for another couple if they can have children. This is not a call to create a stigma around those who need extra help from fertility clinics. However, should there be protocols when a doctor should and should not go forth with fertility treatments? A physician swears to “do no harm.” Can he keep that promise if the children brought into the world have a known chance of being sick or sterile?

Let’s move aside from infertility to parents who are carriers for disease. One such is Lupus. Lupus is an autoimmune disease that can be inherited from one parent having it. There are some patients who can survive an almost normal life with Lupus. Others can have a flare, where their immune system turns deadly, and be left in need of organ transplants. Should a parent with Lupus be allowed to have children and give them Lupus? Should there be genetic screening? Could that screening go badly?

There is also Huntington’s disease, or HD. HD tends to affect people in their midlife, after reproducing children. HD causes brain degeneration and usually leads to loss of motor control and death. While drug advances have increased both quantity and quality of life, HD is still an early death. A little genetics: HD is called autosomal dominant. This means that a person only needs 1 copy of the gene from either parent (you have a total of 2 copies of every gene, one from your mother and one from your father) to have the disease. Should a person who has the HD gene take a 50/50 chance to have a child?

There are multitudes of other disease that have the same inheritance pattern, which leaves a 50/50 chance of all children being affected. Should a parent with this affliction be allowed to procreate?

When does the choice become too utilitarian? It may appear fundamentally wrong to tell a person they cannot do something so very personal. However, is it right to subject a child to such disease and troubles? Should we have genetic screening? Should we give individuals who are carriers or have a disease to IVF to prevent the “bad” eggs and sperm from joining each other? How will a son born to ICSI feel when he discovers he cannot reproduce and everyone knew? Is this even an issue at all? These decisions can and do affect others if you think about the costs and resources affected children may need.

At what point would it be “cruel” to bring a child into the world? One could argue that it is already cruel to bring children into this world given its issues. Is the use of IVF even an issue at all? Is it ludicrous to even think about these issues?