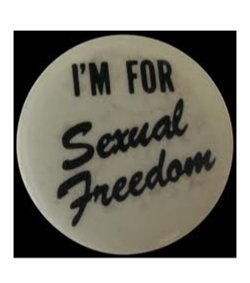 Institute for Ethics & Emerging Technologies (ieet.org)
Just when you think you've gotten your own sexuality figured out, you run into your nosy next door neighbor and come to the conclusion that not only is your own sexuality something that you could never share publicly, but God help anyone who is any different from him. Gossip and closed mindedness are the two worst killers of everything good. Despite how good his lawn looks, he can still be a total idiot.
I live across a man named Old Man Smith who must have fought in WWI because he’s at least 205 years old. Don’t get me wrong. I appreciate the fact that he’s a veteran, but I’m a bit pissed that he comes over and tries to get me to sign up for DirecTV once a month after I've already told him that we subscribe to it. He’s also told me that my Halloween decorations are of the devil. I cannot imagine telling this man that I was a lesbian. First of all, I’m not a lesbian. Regardless, I’m sure that he’d say that I was of the devil if I was. People like Old Man Smith scare me.

There’s a ton of “Old Man Smiths” in the world that don’t make it easy for people to be who they want to be sexually. Gay, straight, bisexual, a swinger, having an open marriage, and more – these are all options that are seriously criticized because they are open about their sexuality. The most important question is, “Why is it anyone else’s business?” If it doesn't directly relate to you, then let people be. Why are people so judgmental? Anyone and everyone should have the right to get married. Who are you or Old Man Smith to tell anyone otherwise? Those who have a sexual preference that differs from yours doesn't mean that it’s wrong; it just means that it’s different from yours. They are the same people who work side by side with you every day. They fix your food. They take your calls. They are in the movies that we watch. They teach our children in our schools. They help defend our country and they die doing so. They are mourned just the same as those who have your preferred sexuality and most of the time you never even know it. It’s time that you did. It’s time that everyone did. We live in a time and place that everyone has the same rights. There’s no reason why Old Man Smith's voice should be any louder than the homosexual man who drives the ambulance to the hospital every time Old Man Smith's heart decides to take a break.

His yard looks wonderful though. No excuse. None. We aren't going to change the minds of people like Old Man Smith, but what we can do is raise a more accepting generation. We can educate them. We can vote into leadership those who are willing to accept the conditions that we set and demand the change that this newer society needs in order to move forward. We can hold them accountable for the things that they promise us.

We can step out into the general population without fear of being judged and hold our heads high when our supporters come to our side. And as supporters, we pledge to come to the aid of those who need us. We can do this. We can fucking do this. We can drag this generation and all of those after this one kicking and screaming into the face of open sexuality by writing, reading, reporting and getting the information out there. No one can stop any of that. It’s up to us. Here we come.
Tags:
Views: 1423
Related articles