The Spirituality of Sex 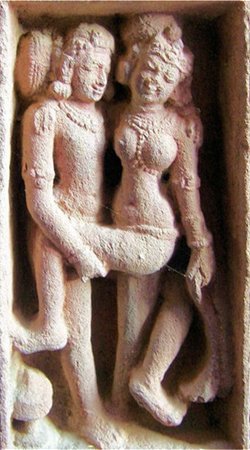 Sujit kumar
Do you like sex? Do you like ambiance? If there's one thing we learned from ice-cream sandwiches, it's that good things are always better combined. (Or, well, usually, at any rate. We received quite a different message from jalapeno jelly beans.)

"By rooting out the false idea of the body being the Self. There is no sex in the Self. Be the Self and then you will have no sex troubles."

There are two types of people who have sex, as far as the pure abstract concept is concerned. Those who are happy with it as a simple cut-and-dry expression and those who seek to make it a unique and changing experience which reflects many things both inward and outward. An experience not necessarily only of themselves, but of their comprehensive place in the world.

Neither of these two types can be said to be lacking, of course. Since after all, if people's goal is to be happy, and they've achieved satisfaction with the schema of action they have constructed for themselves, then what purpose do they have to rock the boat, and to try venturing out into unfamiliar waters, when to them they see those as having not much to gain?

However, of these two types, the latter is undeniably the more adventurous and sexually creative. This isn't a judgment of course, since it's merely rewording the description in the form of an explanation. Many people want their sex lives to reflect an ever growing internal self, and for them to express in a more direct way, their internal mentalities and thoughts. Sex, of all things, is perfectly situated to be a fantastic expression of this, since as humans are evolutionarily designed to base their primary drives in life around it, it correlates, and on another front to their emotional mentality; judged of course by their level of contentment on these fronts.

What this means is simple: the human brain is hardwired to the desire fulfillment of the drives it seeks to obtain. Since sex is such a pressing one, it can reflect, or even make more enjoyable other situations the people partaking may have in other areas of their life.

A quick refresher in symbology will make the point a bit more clear. All (or at least most) people desire some degree of control over their environment. Nobody wants to be the man in the office with the smallest cubicle; the one whose ideas are never listened to, whose opinions are scoffed... the one who is only there because people need menial labor and they're the one willing enough to comply with harsh demands without complaining. Most people want to move up... to be respected. (indirectly if not openly. Do not forget that some people such as introverts may have a hard time dealing with such things when they come. Do not take it as an insult.)

But the office is not the only realm of one's life. The man who comes home from this hard day of work, to a moment of passionate intimacy can use this new situation as an exemplary of the power they have the need to feel in their life. Being driven from primal urges from deep in the history of the human subconscious, the brain can recall the act of penetration as if it was a caveman piercing an animal with a spear. The pleasurable sounds of their partner as the fanfare of a crowd who lauds the victor's ability, and is willing to submit to them, as the victor of their struggle for social dominance. In this way, the one who has a need for power (or any feeling it can easily replace) can use it for their sense of fulfillment. They can use their primary observer of their existence, and their bond with them as a source of proof that they have a right to lay claim to their sense of a feeling of accomplishment.

But don't think that sex is merely a way to replace what one might not find in the outside world. Rather, it is the opposite. It is a valid addition, like salting a meal, which turns bland foods tasty, and ones which were already delicious to such a level of taste that there's no way to deny your satisfaction. It can be used in various means (roleplay, bondage, whatever you choose) to explore not only your relationship, but also the internal workings of the minds of the people involved. It is an access point to the intuitive products of the mind, in one of their most focused forms. It can be used to solidify the mental and symbolic archetypes which exist within all people to a form more readily expressed, and if one chooses, understood.

But how does this tie into spirituality, you may ask?

Since the dawn of human history, the first archaic cavemen have looked to the sky, and tried to find meaning to their existence. The birth of spirituality came with the birth of the human mind. And with this, came the first humans who began to signify what they considered universal archetypes of reality in a symbolic form which would be more readily expresses and understood by others, and ultimately... shared by them.

What some call spirituality, others may call purpose, or drive. Or even, on its other side, ambiance. The terms and functions may differ, but the primal human search for unity and fulfillment has never faltered. Though it is not consciously processed by all, this same drive gets channeled into different forms, which ties it back to the entirety of human existence, from their shared experiences with partners, to their community interactions with the whole world.

As such, you should be already beginning to see the overlapping area between channels for one's drives, and the primal symbolic forms they take place in. Though many, even who search for ways to expand their intimate experiences have never particularly consciously flirted with the idea, sex is actually an optimal way to explore spirituality as well, for the aforementioned reasons. It can be a channel for symbology, and by extension a way for the people involved to become more closely acquainted with even the things in their own heads which they have never seen consciously expressed.

But how can this be so? Of course, I don't mean to tell you what the entirety of your own limitations and how you would explore them are; it would be rather presumptuous of me to do so! But I can at least give you a crasher as to what the ideas might contain. And you can use this as a basis of a new horizon from which to explore your own intimate personal secrets.

In any sexual relation (Or at least the ones which are not very casual) one of the primary basis for the action in and of itself is the relation of each partner to each-other. This much is straightforward. And to those who are more familiar with meditation, the act of such is release from one's self. IT is a sense of diminishing one's own taking in and giving out as waste of individual aspects of the world around them, and rather to become in tune; one with the world itself; a single continuum. But what happens when you combine these ideas together? What you get is no longer an act between two people, but a representation of one's own place in the cogs of infinity. It’s a symbolic physical representation of an act not one for another, but with one's partner as the form of the world, and the self as a form of becoming one with it. As diminishing into the sea of ambiance as an act of unity with one and all. Of all people.

This is of course not limited to an act itself. It can also come with physical symbolic representations in the form of roleplay items. Added mentalities. It can even if one so chooses, carry itself out as a universal mentality, beyond mere sessions, and help positively influence one's own way of viewing their own interactions with the consummate world around them. (But really, now, we don't mean to ACTUALLY envision yourself always having sex with everything you come in contact with. It's more a progressed mentality of unity.)

But yes. The added possibilities for self-review and enlightenment are boundless. This is merely one more among many versions of sexual expression. Perhaps one which many had not yet thought to try, but would be willing, after coming upon the suggestion. Remember. The possibilities are limited by nothing but your own imagination.
Tags:
Views: 1593

Kenneth Fort
I'm no one in particular. A writer, and in school to be a chemist.

Other articles by Kenneth Fort