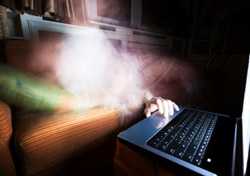 On Craigslist, the user can find anything their heart (or other organ) desires. Is this a healthy thing - and who's doing it? Cherry Trifle finds out.

Am I dating myself with the 1971 Willy Wonka movie reference? Perhaps. But I can hear her voice, her insufferable want, as I peruse the Casual Encounters (m4w) section of Craigslist, from the predictable:

Cool guy looking for a cool women (Sadly, the poor spelling is just as predictable.)

To the niche market: Are you on your period or wanting to be impregnated? (While there was a graphic description of this poster’s desire for “messy sex” inside—“I would love for you to sit on top of me put it inside and we can let it flow”—no further procreative proposition was forthcoming.)

You might have any one of them in less time than it would take to get a pizza delivered. Welcome to the age of (too much?) information.

Just as the ’70s ushered in a jump-cut in sexual evolution—a singles scene rife with newly liberated women looking to enjoy the no-frills pleasure of the one-night stand—so, too, emerging from the primordial ooze of human sexuality, has the age of the Internet spawned another incarnation of the beast with two backs—one that found the atmosphere a hospitable place to raise its young.

The freedom and anonymity of e-mail, IMs and private chat injected the already formidable power of words with supercharged adrenaline. Touted during this new age of HIV as a wonderfully safe way to explore one’s sexuality, Cybersex became a heady elixir to cure the lonelies out there. It was also a powerfully addictive drug. Entire daytime talk shows were dedicated to the casualties: real-world relationships torn apart by disembodied connections that somehow, inexplicably, grew more powerful despite their ethereal nature.

There is something extraordinarily liberating about online chat, it seems. When your intent is pure, particularly when you’re not necessarily planning on taking the relationship into the real world, you are afforded an ability to be completely honest in a way that generally isn’t possible in the realm of traditional dating, in which there’s always something you have to wait on, things that are just TMI, things that you can’t or wouldn’t want to discuss or confess on a first, second, or third date—or maybe ever. Move the small-talk online and suddenly, it’s safe to throw it all out there. People listen to you. You listen to them. Seemingly profound bonds are forged in the fertile fire of shared secrets.
This level of honesty, the idea of laying yourself bare-naked to another human being who wants to listen, who reciprocates with his or her own private dreams and desires, fetishes, fantasies and failures, lays the foundation for intimacy many people haven’t even experienced with a longtime spouse or partner.

But can that intimacy survive the jump to IRL?

“People must be very careful online,” says Jesse, 37. The divorced mother of two is an avid online dater. “We can get very drawn in to great conversations, to how people come off in their writing, chatting, IMs,” she warns. “Yet in real life, they seldom back up what they offer. When you meet and grow a relationship online, it takes much longer to find that out than when you get to know one another in more traditional ways.”
Casual Encounter types, the ones who can read and spell and complete sentences, anyway, seem to concur. They’d rather just chum the water and dive into the feeding frenzy with the rest of the sharks.

A Little Dabble Do Ya

A few months ago, Rob, a 41-year-old graphic artist, thought Craigslist was the way modern-day garage-salers got rid of their old exercise equipment. Then he discovered Casual Encounters on a co-worker’s computer. “The ones I liked were the ‘first-timers.’ Girls who supposedly had never done anything like this before. One that stuck out was a college girl who wrote that she’d been fighting with her boyfriend and needed a good fuck before going back to him.”
Charlotte, 37, has never been married. An attractive, successful medical sales rep, she owns her own home and has a calendar filled with many friends and social events. She has used various internet dating sites in the pursuit of romance, but admits that the Casual Encounters ads “get her going” to a degree.

“The idea of putting it all out there for sex turns me on,” she says. “There is something so genuine about the people. Everyday ordinary folks—little, big, black, white, whatever—nothing fake or airbrushed.” She calls herself a voyeur. “That’s probably why I watch so much porn, but Craigslist is more real. I definitely have been tempted by a few men on the site, but the fear of showing up alone to some random hotel room keeps my butt in front of the computer.”
Even so, her search for love on mainstream sites has led to one feverish casual encounter. “Physically he just wasn’t my type,” she says, though he did show up with three bottles of her favorite wine. “We decide to crack open a bottle, he was really funny. We moved onto the next. By the end of that, by God, I thought he was the funniest, most handsome man ever. Midway through the third I was sitting on his lap, dry humping him. Needless to say, I ended up doing him. He was good and I really enjoyed myself.”

Charlotte admits with a chuckle that she kept the date just to have one. “There is something safe about knowing it isn’t going anywhere that allows me to throw in the towel and just go for it with the sex. There is nothing to ruin, per se. You have no inhibitions if you don’t care.”

Rob, who is married, is no stranger to the casual lay. The pull of the CL classifieds wasn’t quite strong enough to get him to answer, but he confesses the temptation was there. “The thought of showing up at an apartment or dorm and fucking a stranger before going in to work was pretty exciting. Simply visiting a site that is filled with available women and picking who you want is very liberating. It takes a lot of work out of the process. Sometimes you even get a picture.”

Although he doesn’t deny this generation’s propensity for instant gratification, he thinks we’re less guilty than we look. “It’s only unique because we’re the first generation that it’s been available to. If Craigslist was around in 1959, people would have been using it.”

The idea of bypassing the courtship aspects of hooking up, says Rob, “is kind of hot,” something each person I spoke with mentioned more than once. Leslie, 27 and a grad student, was the only avid Craigslister of the bunch. She cites her schedule: “two crap jobs and 16 credits this semester,” along with an above-average sex drive as the mitigating factors that drove her to the Casual Encounters page late one evening.

She responded and the two spent an hour chatting via IM before she agreed to meet him at a bar between their locations. Neither of them drank alcohol—which was mutually agreed upon before the encounter. “His name was Ross. After about 20 minutes of checking him out, we went back to his truck and I sucked his cock with a condom on it, then climbed on top and we fucked like rabbits.”

Leslie and her new friend stayed in touch and are now not only regular “friends-with-benefits”—they’re casually dating. “We go to movies,” she laughs. “Sometimes he’ll make me dinner.” They’re both tremendously busy, but despite all odds have managed to do what most of the lonely folks online are desperately trying to do, just in reverse. She has had a slew of other casual hookups via the CL classifieds, though each was a one-time shot. She considers them equally successful as the surprise lasting connection with Ross. “I’ve had some incredible sex,” she says. “One guy never even took his clothes off. He just went down on me and made me come twice, then left. Very skilled with the tongue. He delivered exactly what his ad promised. If he wrote me, I’d meet him again in a second.”

Leslie doesn’t see the big controversy, though she is keenly aware of the safety risks. She takes as many precautions as possible, occasionally even having a friend tail her to the more clandestine meeting places. “Part of the allure may be the element of danger, but mostly it’s just really nice to be able to cut through the bullshit and get what you want with minimal effort. Life is just too busy to deal with the rest of the human interaction, but that doesn’t mean you don’t want to brush up against another warm body. I’m horny now,” she laughs. “I don’t want to have dinner three times with a guy I don’t even like talking to. I have papers to write. I want it now.”

And as I click my way along, I can hear Veruca mewling for that golden goose.


*All the names in this article have been changed.
Tags:
Views: 1042