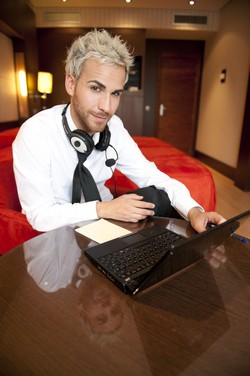 The sea of online love is vast, and there are a lot of fish in the ocean. If you don't want to wind up looking like a bottom feeder, you have to have to dangle the right bait. So, put away those night crawlers and read on.
“Want to see my latest matches?” Heidi asked, pulling up her account on a popular dating site. Having never ventured into the digitized pick-up joint that is online dating, I was intrigued. An attractive divorcee with two teenaged children, a profitable business and a cutting sense of humor, Heidi is a force to be reckoned with and I didn’t understand why the dating website had yielded so few dates since she’d activated her account. After studying her profile, examining her matches and perusing other potential suitors, I understood fully.

To put it lightly, her matches were social lepers.

There were those who used the photo section to display veritable galleries of muscle-shots taken by way of their bathroom mirrors. Others had no grasp of the English language, believing in the liberal and indiscriminant use of apostrophes. The presumably more literate but equally clueless, cited the last book they’d read as some variation of a self-help manual. A narcissistic, mentally unstable misanthrope with the spelling skills of a retriever? What time can you pick me up?!

In the time I spent sifting through the muck that was Heidi’s Potential Love Matches—and later venturing a peek at the profiles of her female competition—I discovered why so many online daters are signing up for their fifth consecutive subscription and decided to compile a short list to help them put their best Internet face forward. Here goes.

Spell Check is Your Friend

There is NO excuse for spelling, mechanical or grammatical errors riddling your profile. The message these gaffes convey is, at best, you are not smart enough to master basic spelling (Beachlor? Attraitive?) and at worst, you are too lazy to run spell check.

While it’s true that refusing to date people with rampant misspellings or grammatical inaccuracies on their profiles might be shallow, consider this: Do you want to get involved, or more importantly, sleep with an inattentive partner who rushes through things just to get to the end result? I think not.

That Picture is All Wrong (A Common Male Mistake)

If a picture’s worth a thousand words, listen to what yours is saying. I could not believe how many men had neglected to inspect the backgrounds of their photos. One man was wrestling on the floor with his adorable dog. Excellent—if you ignore the pigsty living room with wet clothes hanging to dry on a railing behind them. Other shots featured filthy looking bathrooms, which most woman will agree, is a deal breaker. And while we’re on bathroom shots, is that grainy bathroom mirror reflection self-portrait honestly the first image you want a potential mate to see?

You don’t have to be attractive (or even “attraitive”) to have good pictures. I saw a number of excellent photos, many of men who’d be formidable contenders in a John Candy Look-Alike contest. Despite being more Brad Garrett than Brad Pitt, their photos were not only flattering, but even attractive. Posting a variety of shots illustrating their interests was a plus. Some showed their subjects skydiving or skiing, others were hiking or on vacations, and still others were simply hanging out locally. The point is the pictures were candid and sincere, not staged or forced.

Most people have certain parameters that are non-negotiable pertaining to potential mates—usually related to religion, age and children. While preferences make us who we are, many female daters didn’t seem to know where to draw the line.

Surely some have been burned before or have learned over time what they like and have similarly refined their tastes. However, what struck me most weren’t the seemingly endless requirements, which were often:

• Trite: “Must love walks on the beach.”
• Unrealistic: “Must always be happy.”
• Irritatingly specific: “Must love spicy food, but not Mexican food”

And the reason they cited these requirements must be met? “I deserve it.”

This sentiment was echoed repeatedly. Yes, everyone deserves happiness, but these females reminded me of the bratty birthday girl who wants a doll “that makes at least five different sounds, wets herself and closes her eyes. And if she doesn’t cry real tears, I don’t want it. And if you get me something else, don’t talk to me because you’re wasting my time. I want this doll. I deserve it.”

My Hobby is Having Fun

“Having fun” is not a hobby. “Having fun is the result of a hobby. Instead of stating that you enjoy “having fun” (which, by definition, is something everyone enjoys), try listing what you do that is fun.

At a loss? Time to get out more.

Some websites allow people to select hobbies from a predetermined list. I cannot prove this, but based on the elongated nature of the hobby compilations I saw, I suspect some of these daters’ alleged “hobbies” were things they’d done maybe once. Cop a clue. If you once walked your dog off the beaten path of a local nature preserve, “hiking” is not your hobby. If you once painted a flowerpot with your niece, you are neither an artist nor a ceramist. List what you enjoy doing regularly—and you’ll likely attract less skepticism, respect for your honesty and more solid matches.

Ultimately, I am sure the daters with unseemly profiles are, in no way, damaged goods; they just haven’t mastered the art of making favorable digital first impressions.

Hopefully, these tips will give them the impetus to make small changes, enabling potential mates to see their true colors rather than glaring typos and pictures of their messy living rooms.

And maybe, just maybe, Heidi will go on a date with one of her matches.
Tags:
Views: 1093

Lady J
Lady J is a writer and pole dancer with an affinity for Lil Wayne. Her big mouth and lack of good judgement make her a liability in both professional and social situations.

Other articles by Lady J