A Partner's Past: How Much Do You Want to Know? 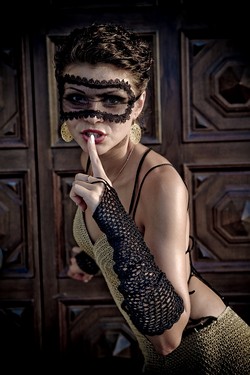 I know how many sexual partners are lurking in my husband’s past. I know one had MY first name. Another is heir to a well-known salad dressing fortune. I know he never contracted a sexually transmitted disease. This is all I know. This is all I WANT to know.
There are those among us who are turned on by all the torrid details of a partner’s past. There are those who, if not turned on, seek all the details out of curiosity, a competitive streak or nosiness. And then there are those people, like me, who want to know as little as possible. As long as I can be assured my health isn’t at risk and I can go to the grocery store without running into someone who’s taken a five-cent pony ride on my husband (save seeing her surname on a bottle of Thousand Islands), I’m content to play ostrich and bury my head in the sand. Fortunately, my husband feels similarly and our sexual pasts have never been an issue. Our “don’t ask, don’t tell” tactic works for us.

But what about everyone else? What factors—if any—shape a couple’s conversations pertaining to each partner’s respective sexual past? I set out to explore how others deal with the complicated topic of divulging (or not) past sexual exploits and what dynamics play a role the decisions to know … or not to know.

… but many of them do NOT want to know about the fun her partner’s had, according to my admittedly unscientific polling of my female acquaintances. A popular justification was these women didn’t want confirmation that there were women before them. “I don’t want to believe my husband connected on a physical or emotional level with anyone else before me,” stated Hannah, married to her husband for five years. “I know he’s been with other women, I just don’t want to know about it. It’s naive but I’d like to believe I’m the only one who ‘gets’ him like that.” When I counter that she must have done something right because he married her, she pauses. “That’s true, but it doesn’t mean I still don’t feel insecure when I think about him with someone before me.” I ask if she’s always shied away from knowing details of boyfriends’ sexual pasts or if her desire to remain in the dark is limited to her husband. “[My desire not to know] is more intense with him, sure, because he’s my husband and the father of my children, but in general, I just never wanted to know. I don’t want to feel that competition, even with nameless, faceless girls.”

For Andrea, a lesbian in her late twenties, there’s little namelessness and facelessness. Her situation is compounded by her assertion that, within our town’s gay community, everybody knows everybody. “If I hear too many details of a girlfriend’s past, I get majorly jealous because I personally know the people she’s talking about lots of times. When I see [a girlfriend’s past partners] out it makes me sick to think about what they did together.” I ask Andrea if it wouldn’t be better to know more details; perhaps it would put her mind at ease. “If you already know who a girlfriend’s exes are, wouldn’t you rather know what they did instead of letting your imagination run wild? Isn’t it possible their sexual relationship was more innocent than what you imagine?”

Andrea chuckles. “Innocent? Not the girls I date.”

Me Tarzan, You Virgin

The majority (though not all) of the straight men I spoke with presented gross double-standards, largely citing they didn’t want to know what partners were doing previously (“Unless”, one eagerly offered, “it’s with other girls”). The twenty and thirty-something men used the terms “slutting around,” “skank” and “whore” liberally, peppering sentences with such unflattering descriptions as “loose” and “dirty.” One referenced Ludacris, claiming to want “a lady in the street but a freak in the bed.” (When I countered that a ‘freak in the bed’ had to learn to be freaky somewhere, he just shrugged.) A few guys let their guards down, providing insight into the preference not to know. It ultimately boiled down to two factors. First, society, right or wrong, frowns upon women as sexual beings. The straight men simply didn’t want to view their mates as “damaged goods,” as one put it. The second factor was male ego and competition. As one subject said, “I want to think ‘I’m the man.’” (Then he clubbed his girlfriend over the head and dragged her to his cave …)

The gay men I questioned were more forgiving of partners’ pasts and much more eloquent in responding to my queries. As Jay wrote, “I think in my experiences, I'm not the type who wants to know my partner's past … I think its slightly (and I mean SLIGHTLY) different for gay couples than straight couples … Because guys are pigs, for the most part. Two guys together means more abrasive sexuality than there would be between a man and a woman (or at least I assume so.) If you're gonna tell, tell only the exploits—but not who with. There's always going to be a sense of competition if you're going that route.”

… And Don’t Leave Anything Out

I had to cast my net a bit wider to find someone who admitted to being turned on by tales of his partners’ exploits—and the more explicit, the better. “I get off on it,” said Dave, a friend of a friend. “It feeds into that whole fantasy guys have of a bad girl who needs to be punished. I like how [innocent she appears] and then hearing how dirty she really is.” Dave also believes it has something to do with his competitive nature. “I played sports all my life,” he mused. “I live to win. This is something else I can win at. I want to hear what he did to you, and how it felt. Then I want to do it better.”

The Expert Chimes In

Ultimately, my unscientific quest left me with more questions than answers. When it comes to learning about the sexual pasts of our mates are we actually the sexual stereotypes often projected onto us? Are men generally chauvinist Alpha males who want to “be the man” and women rife with jealousy and insecurity waging battles with invisible enemies? That my unwillingness to reconcile with my husband’s existence as a sexual being before me (and vice versa) feeds into this stereotype was unsettling. Which is why I may consider being slightly more open-minded when the topic of my husband’s sexual history comes up. Still, old habits die hard; I think I’ll venture in slowly, starting by picking up a bottle of Balsamic Vinaigrette.
Tags:
Views: 1580
Related articles

Lady J
Lady J is a writer and pole dancer with an affinity for Lil Wayne. Her big mouth and lack of good judgement make her a liability in both professional and social situations.

Other articles by Lady J