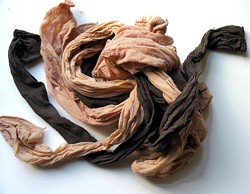 It’s a tradition as old as the internet itself—the act of selling one’s own used undergarments online for a quick infusion of cash. Yvette Safire recently found herself in a bit of a financial bind, and thus began to contemplate the possibilities...

Early in September, hard times hit me with a sickening thump. Due to a mix-up at the bank and sheer bad luck, what savings I had were eaten up. I had just over $17 in my bank account when it was all said and done. It’s a scary thing to be in New York City with just a handful of change in your pocket. It’s even scarier to face the prospect of throwing yourself on the mercy of your up-by-the-bootstrap parents when you couldn’t quite explain why you hadn’t had more savings to begin with.

I turned to Craigslist in desperation, hoping I could spend an hour testing some product and walk out with twenty or thirty bucks tucked into my wallet. No luck. A few months before, though, I’d learned that selling worn undergarments was big business. Find a willing buyer, and your worn Underoos could turn into cash.

I’d thought about selling my panties, but couldn’t bring myself to do it. Before I left the country for four months to study abroad, my boyfriend and I had one last romp on a squashy rug at my parents’ house. I casually wore a brand new sheer g-string under my sleep shirt. He lifted up my shirt and snapped the elastic appreciatively. As he started to pull my panties down, I told him he could hold them for me while I was away. He left them on until the very last second so they would have more of my scent. My heart broke when I watched him tuck them into his suitcase.

Our farewell frolic isn’t the only time panties have been important in our foreplay. Over the past two years, The Boy has in turn teased me through my underwear, pulled them off with his teeth, and torn them right off me. Mailing them to the highest bidder would be like FedExing a raunchy, private memory into a black hole.

Pantyhose, on the other hand, aren’t as intimate for me—or for us. We love how pantyhose cling to the curves of my legs but mostly I just pray to make it through the day without tearing them. We quickly toss them aside, like jeans. They’re a grown-up alternative to the white socks I wear with my Converses.

I settled on selling a pair of my stockings, looking to make easy money off foot fetishists. It made me a little uncomfortable, truth be told. I tried not to think about the recipient sniffing the hose’s crotch and feet and instead concentrated on how best to spend the money: groceries? One of the paperbacks for my literature class?

The two of us don’t have secrets, so I asked if The Boy wouldn’t feel violated by my selling stockings on the Internet. He said he was okay with it, but didn’t want to hear the details. I’m lucky; most guys would’ve dropped me faster than you can say “Danskin.”

The first step was my ad. The other girls wrote line after line—chock full of spelling and grammatical errors—about their dirty, wet, hot, sexy, lacy panties and how they wanted serious inquires only. They attached pictures and sometimes phone numbers. Prices ranged from $15 to $50 for the most expensive panties, so $25 seemed like a fairly good place to start.

I’m a 21-year-old selling my worn, sexy, sheer, black tights for $25. I have a medium build, long legs, and full breasts and lips. PayPal only. Thanks.

I knew I couldn’t sell them any other way, so I sat around in practically new stockings for an hour and a half, trying to make them smell. I set up my webcam, thinking I’d get it over with fast, like a lip wax. My perfectionism took over as I tried to pick the best background and fiddled with the lighting. I shot myself from the waist down, I drew on my former ballet training to accentuate my calves, and I snapped a few of myself in pumps. By the time it was all said and done, I had about fifteen photos. Two went out in an email. He later emailed to say he liked the photos, but $25 was a little steep.

My roommate, who knew what I was doing from the beginning, thought I shouldn’t lower the price because I didn’t want to seem desperate. When my original post expired, I tried again, this time dangling the hope of photos upon request. My fortunes had improved, so my heart wasn’t in the sell. I figured no one would be interested but five days later I got an offer from a very eager man, who wanted not one but four pairs of stockings and was willing to become a regular customer. He didn’t even ask for photos.

I have yet to decide if I’ll sell to this guy. For one thing, I’m a sneakers and jeans girl Monday through Friday, meaning I only pull out my stockings once in a while. I would be buying new ones at the drug store and thinking of ways to stink them up for the sale. My current financial situation has allowed me the luxury of thinking morally about my customer’s satisfaction. It doesn’t quite seem fair to manufacture excitement for a quick buck. This kind of tantalizing Internet liaison doesn’t excite me. I simply don’t find feet sexy. I understand the evolutionary biology used to explain foot worship; that perhaps our furry ancestors sniffed footprints to see if a potential partner was ready to mate. The Boy and I tried a toe sucking experiment for shits and giggles and my skin crawled. But if I can get this buyer to accept three pairs of stockings for the same price, I might treat myself to a pedicure.
Tags:
Views: 1124
Related articles

Yvette Safire
Yvette is a poor student trying to keep the home fires burning between literary analysis essays. While she hasn't had many partners, she is of the Mae West school of thinking: I'll try anything once, twice to see if I like it, three times to make sure." She loves pin-ups from the '40s and '50s and hopes one day she'll wake up with Rita Hayworth's body and wardrobe. Cheers

Other articles by Yvette Safire